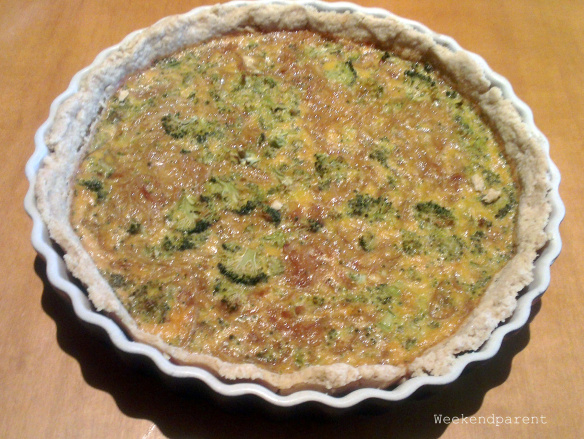 On the second day of the $2 a day challenge, I was better prepared.  I had cooked more food and had it with me at work.  It was a much easier day.

I was reflecting in the morning on how I strangely did not feel nearly as hungry as day 1.  Perhaps it was because I had more food, but even so, I was still snacking on my porridge breakfast at 1130am.  I was discussing this phenomena with a friend, who helpfully suggested I was in fasting mode. He had experience from his annual Ramadan fasting.  Seeing how hungry and grumpy I was on day 1, it is hard to believe what it would be like to have no food at all during the day.

Breakfast was 2/3 cup of porridge. I gave myself extra this time, to help fuel myself through the day.

Lunch was half of a caramelized onion tart.  I had high-hopes for the tart.  It would have tasted better with cheese to help offset the sweetness of the onion, but still it was not too bad.  A colleague was subtly querying me at lunchtime if I was ‘still on the $2/day challenge’.  He thought I had just ducked down to the cafe for a quick fix.

Dinner was a simple meal of potato rosti with apple sauce.  I used to love potato rosti as a kid. My Nana used to make it for us.  She called it ‘mock fish’, I guess it must have been a depression era staple.  I had no idea it was thrifty – I just liked it a lot. 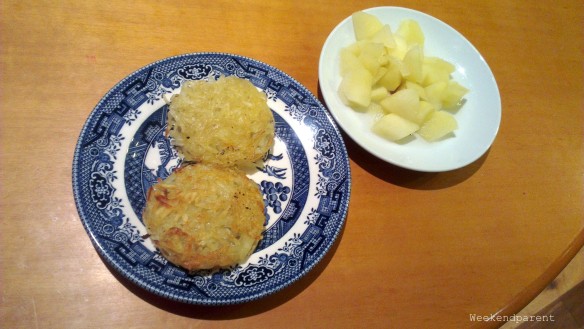 There was actually a third rosti, but it kind of disappeared while I was cooking it. I like these potato rosti so much.  Can’t believe it has been years since I ate them.

After dinner I relaxed with a cup of tea, made from leftover apple peel and a bit of sugar.  While I am craving real tea a bit, it actually tasted quite nice.  Not luxurious, but good.