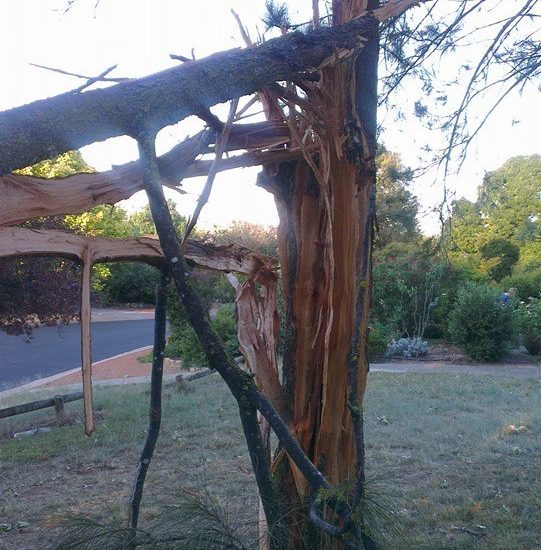 I have been a bit quiet on my blog recently.  And not because I haven’t wanted to write. I had a lightning strike on my house.  Then the modem went dead. It is times like these that a safe financial plan makes sense.  And friends.

I wasn’t home when it happened.  Nor were my kids.  Thankfully we were all safe.  We think the lightning hit a tree in a small park across the road first, then hit our neighbours house, then ours (and perhaps some other houses in the street).  Lightning apparently has around five strikes, so goes in different directions.  I have never had this happen before and hopefully there will not be a repeat.

My neighbour’s hot water system died, their TV set top box was damaged, and like me, they lost internet connectivity.  Thankfully all I lost was my modem.  But the incident made me realise how important it was that I had a good insurance policy on my house and contents. You never know when something freakish might happen. My neighbours had a good insurance policy in place and were able to replace the hot water system within a few days.

It has been a long process to regaining internet to the house.  Long and drawn out. It took a while to establish if it was a problem with the line or with the modem.  Eventually after several phone calls and trials, we worked out it was the modem that had been ‘fried’.  Although it was supplied by my provider eight months ago, they refused to replace it for free as ‘Acts of God’ are outside of their warranty.  I tried three different other modems to see if they could connect, but the VDSL2 I have installed at home is very particular and there are few modems that work with it.  I resigned myself to wait three to five working days for a new one.  And to pay for it.  Eventually, a week to the day after the lightning strike, a new one arrived.

On the way to going back to Officeworks to return a modem, and before venturing to JB Hi-Fi to try another modem (which $260 later also didn’t work), I noticed that wisps of smoke was coming out of my car bonnet. I was nearly at my destination so I turned off the air conditioning and wound down my car window.  Thick acrid smoke poured in. My eyes began to water, I felt dizzy and I could hardly drive. Lucky for me the smoke stopped and I soon reached the undercover carpark at Officeworks.

I expected the worst.  I had an important work meeting the next day. I had no idea how I was going to get myself to it, let alone my kids to school and childcare. I also had to pick up some vanilla slices from the amazing Dream Cuisine for my meeting (as you do – the Chair of the meeting mentioned he liked vanilla slices so I made sure to get the best). It was hot; I was hot, I was bothered and the only saving grace was that my kids were with their dad so not stuck in a broken down car with me.

I called NRMA Roadside Assistance.  They said they would come within 90 minutes.  Actually they came quicker.  And the guy who came out was so helpful.  So helpful in fact that he mended the broken tube/hose/bit, then drove with me around the corner to Autopro.  The Auto Pro sales person found the exact right part, I paid less than $30 for it, then the NRMA technician installed it for me.  I still need to service the car soon, but it works.  So far so good.

My NRMA renewal comes up later this month.  It costs $110 a year. I had been wondering if I ought to investigate a cheaper deal. I wondered idly if I even needed roadside assistance at all.  Afterall I had never had to call before now, so perhaps it wasn’t essential.  You never ever know when you will need to call on help.  And that $110 was perhaps the best investment I have made all year.

It can be tempting, as a frugalista, to be cheap. To scrooge and scrimp and save on all sorts of nitpicking things.  Don’t be cheap.  Don’t be miserly with important things such as insurance.  Budget for it as part of your financial plan.  By all means take some risks (e.g. I don’t have income insurance but I have over 100 days of sick leave in my secure public service job and am ahead in mortgage repayments).  But don’t take crazy risks such as not having roadside assistance or home and contents insurance in place.

In the midst of the internet/modem issue, I met Michael Miller, a financial adviser at MLC Advice Canberra.  We had a chat about a passion close to my heart – creating long term prosperity – in the context of considering collaboration or sponsorship options.  But as he pointed out financial planning is so much more than just investing in high performing investments. “We really deal in people,” said Michael, which pretty much sums it up. And protecting you and your family is therefore unsurprisingly part of his financial planning strategy. Of course you need to take some risks in life, but don’t take risks that would have huge consequences for you or your family.

I could rant and vent about what an awful week I have had.  And certainly, it has been stressful.  Amidst it all I also had an argument with my new housemate, an international student who was fretting about not being able to connect with her family via the internet. And I got angry at my kids because it was hot and they wouldn’t go to bed (which meant I had to do a lot of the modem techie stuff very late at night and was exhausted at work the next day.)  I had an important work meeting and got all stressed about it and had trouble thinking clearly.  It got all a bit too much at times.

But actually this week showed me how blessed I am.  I have a lovely, secure home that is safe and well insured.  I have a reliable car that has driven me and my kids safely for many, many trips, which is also insured.  I have wonderful neighbours with whom I have laughed and almost cried with through all of the lightning and internet drama.  I have had friends and neighbours generously help me and give advice on the technical aspects of the internet/modem issue, including a new friend whose advice I value very much.  I have had two friends actually offer to GIVE me modems for free.  And my new housemate installed my new modem for me when it finally arrived, so I came home to internet that was workign perfectly. How amazing is that?

Have you had an Act of God crash into your home and life?  If so, how did you deal with it?  Do you have enough measures in place to protect your family against the worst?