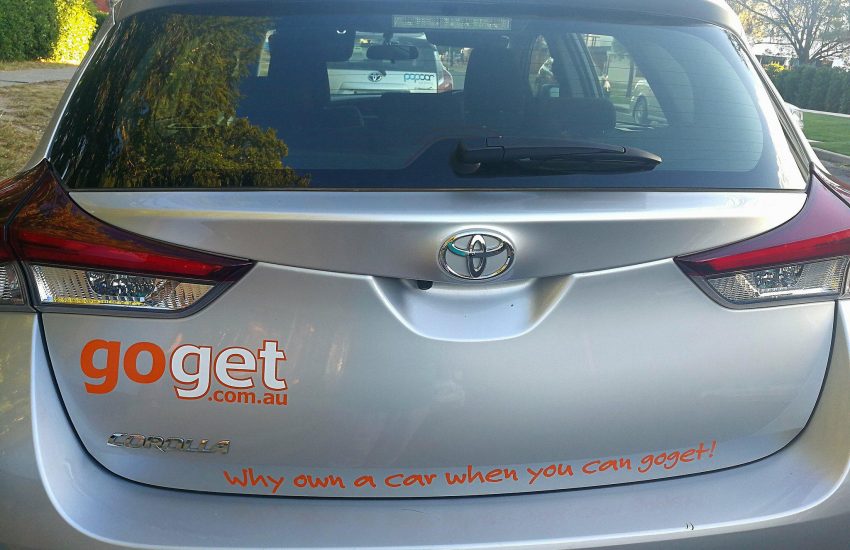 Two weekends ago Neil and I went to Wollongong for a Jimmy Barnes concert.  Jimmy can still belt it out.  And it was not just Jimmy Barnes performing – we principally went to hear Ian Moss and Mental as Anything play (and were not disappointed).  We also surprisingly enjoyed Daryl Braithwaite – riding on the horses in the sky karaoke all the way home. But what especially surprised me was seeing cars with the GoGet logo on them on the streets of Wollongong.

Neil and I first started spotting GoGet cars last October, when we were in Sydney for the weekend.  We were staying in Potts Point near Kings Cross, an area he knows well because of his work (not what this might suggest – he is an upright public servant).  Along the tight roads lined with historic townhouses and apartments (some used for recreational and not just residential purposes, just saying), we couldn’t help but notice the rows of GoGet and other rideshare cars parked.

“What a good idea,” Neil remarked.  “This must be perfect for people living in inner city apartments who don’t have space to park their cars.  No worry about getting a parking ticket this way.”

We paused to admire the cars, all functional vehicles. We wondered how they operated.

I thought it was just a Sydney thing. Until two weeks’ ago I noticed some GoGets within walking distance of my home.  Then we noticed the cars at The Gong, including what looked like people out on a day trip from Sydney.  Then Neil noticed more vans at IKEA.

I began to get interested. Could this be the answer to the dilemma of the tight parking space in my apartment?  Or what to do when my 17-year old Toyota RAV-4 reaches the end of its life? Or the end of having to take time off work (or begging to work from home for the day) so that I could get my car serviced?)

Intrigued, I reached out to Tim Bennett, the content producer at GoGet to find out more.  And this is what I have learned.

GoGet started its life as Newtown Carshare, on a much smaller scale than present.  (It is no the only carsharing service in Australia, but it is the biggest.) Two guys aka Bruce and Nick, with a bunch of friends (around a dozen all up) got together to share a couple of cars. They decided this would be much more convenient than owning their own.  The idea was to improve cities by giving the people the option not to own a car, while still giving them access to have one.

To use a GoGet car, members first sign up on the website. There are several different packages available.  You are then issued with a smart card. Members can book cars on the GoGet app by the day or the hour.  To use a car, a member uses the smart card to unlock the car when their booking begins.

Being frugal, I really wanted to know how much you could save. My own rough analysis showed me that I was paying at least $8.20 a day (over $3,000 a year) even without a car loan to service.  And this is a conservatively low figure.

According to GoGet’s analysis (and based on a number of assumptions), a moderate car user would save over $600 a month, while a frequent user would save around $200 a month.  Their analysis is that anyone driving less than 10,000km a year would most likely save money with GoGet.  (This seems obvious, but the savings depend on the distance you drive.  If for instance you lived in a rural area and drove long distances – as my Neil used to – something like GoGet is probably not the right option for you.)

A key issue for me, having young kids at home, is where the cars are parked.  The allocated car share parking spaces are, I learnt, called ‘pods’.  The ACT Government has several in Canberra; four are within 10 to 15 minutes walk from my inner city apartment, and two are right opposite my work.  My kids and I did a ‘recce’ walk this evening to see if it would work for us; not instant, but with scooters, it is definitely feasible.  The Toyota Carolla parked there looked very clean, and also had roof racks for transporting bicycles.  I’m getting more and more interested.

I was interested to find out from Tim that GoGet has cars at every IKEA in Australia. Yes, every IKEA including Canberra.  Including vans and utes and people movers, so if you buy a huge sofa or flatpack you can just hop into a GoGet and go get that piece of furniture home.  There are TWO vans parked at IKEA Canberra, and there is a new model RAV-4 parked around 15 minutes walk from my home. Tim said that the choice of vehicles available was one of the reasons that people signed up to GoGet. While the fleet in Canberra was still quite small, the vehicles available include Kia people movers and Audis.  They were all late models (i.e. they were much nicer than my 17 year-old vehicle.)

The big clincher for me is whether or not GoGet or other car sharing products would free me from the drudgery of car maintenance.  Because to be honest, I am clueless. I would have no idea if my car was leaking oil, if the suspension had a problem or even if it was about to blow up.  In the last 18 months I have had thick black smoke coming out of the bonnet of my car, broken down and needed to replace a radiator, and had a seriously flat (i.e. dead) battery.  NRMA car assist is my best friend.  Last year I spent $1,500 on maintenance.  Being an older car, this is just going to increase.  But still, it is cheaper to maintain than to buy a new car.

“Absolutely,” said Tim when I asked about whether they do maintenance on the GoGet car fleet.  “We also look after rego, insurance, purchase and sale of cars, cleaning and washing, as well as smash repairs. GoGet offers all of the benefits of owning a car with none of the hassles.”

New model cars that someone else washes, cleans, does maintenance on AND is a cheaper option than what I have currently?  Count me in:)

Thanks to the generosity of GoGet which is offering Ms Frugal Ears a special rate, I will be trialling GoGet over the next six months.  I plan to schedule a Facebook Live soon to record my first GoGet car share experience.  I’m looking forward to sharing the experience with you. Oh, and if you want to trial GoGet they have a ‘refer a friend’ $25 off promotion. Just type ‘Ms Frugal Ears’ in the ‘how did you hear about us’ section.