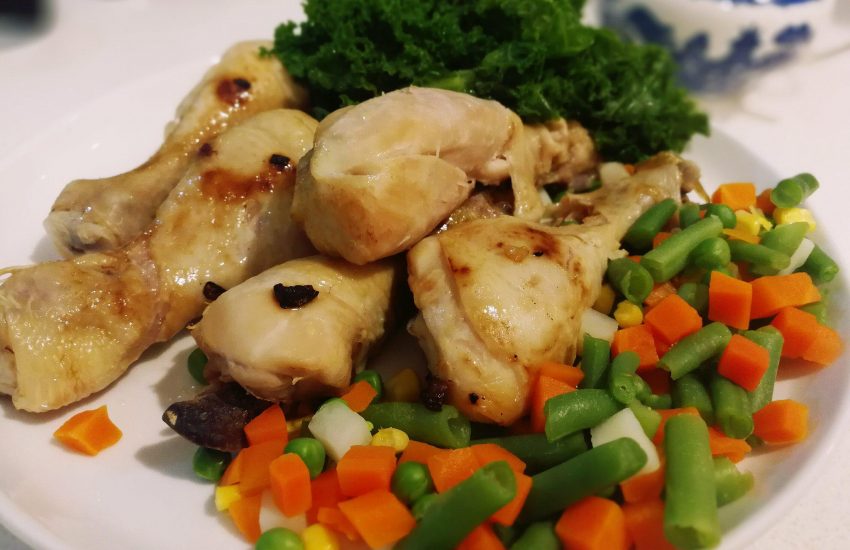 I woke up with a migraine, having been unwell most of Sunday.  I blame some dodgy champagne on Saturday night, but really I have been feeling stressed for a while – mainly about managing work/writing balance.  This morning I woke up and knew it would be a day of staying in bed.  So other than a trip to get some acupuncture, that’s what I did.

The hardest thing was that usually when I have a headache I reach for a nice hot cup of milk tea and some vegemite toast.  Neither of those things were available to me today.  Neil did, however, make me some ‘faux tea’, i.e. a cup of boiling water, made in our new $10 spiffy glass jug we picked up from the Kippax Monster Garage Sale on the weekend.  (To sidetrack, it was so nice to meet two Ms Frugal Ears readers at the event – weren’t there some amazing bargains?)

Neil made me porridge for breakfast using one cup of oats (if you are wondering, there are seven cups in a packet).  We even had sugar and milk – oh the luxury! “I can do this,” I thought to myself.  “I really can.”

In another miracle, I was happy to discover that the sourdough bread dough had risen to the occasion. I was really worried that we would be eating rock hard bread like I did a few years ago on this challenge.  THAT taught me something about humility.

I had visions of doing something fancy with the bread, i.e. making lunch a Jewish fried onion type of thing.  But with my headache, I felt a bit nauseous as I was frying up the onions.  So instead I baked it as is, and served the bread for Neil with margarine and onions on the side.

The bread rose to the occasion, and while it was made with normal plain flour rather than bread flour and would be unlikely to win any awards, it was lovely and comforting.  A five day diet of white bread is hardly healthy, but there is something inherently comforting in knowing that you at least have bread to eat. I am ashamed to say that two thirds of it is gone already.

Lunch today – rustic sourdough bread fresh from the oven. I was home sick unexpectedly so could do this. Ate it with margarine and fried onions. Don't think we could live on bread alone, but I am feeling reassured that we can do this $2/day challenge. #livebelowthelineaus #livebelowtheline #poverty #education #homemade #thismealcost #2dollarsaday #livebelowtheline2018 @livebelowtheline

Dinner is five of our seven chicken drumsticks (of which we ate only two).  Neil lathered them in margarine, topped them with remaining fried onions and put them in the slow cooker, where they baked on high for four hours.  They were soooo good – the meat just fell off the bone.  We served them with microwaved frozen vegetables (which were much nicer than we expected), some kale, and some homemade gravy.  The gravy was especially good.

As we sat down to dinner, it occurred to me that once upon a time a chicken roast like this would have been a bit of luxury in the days when my Dad grew up on a farm.  Now we were eating it as ‘cheap’ food because that was all we could afford.  Chicken drumsticks are so cheap now  – we bought ours for $3/kilogram from the deli at Woolworths.  But in parts of Asia the meat near the bone is prized highly.  I guess it is all about perceptions.

Another cup of faux tea and we had made it through the day!  Here’s to day 2.

Tip: the best thing to do, which I didn’t do, is to find a friend who has a fabulous starter and get some of that.  Failing which, try this one and make sure you start at least two to three days in advance.

Neil and I are doing this as part of the Live Below the Line challenge.  We appreciate your moral and financial support.