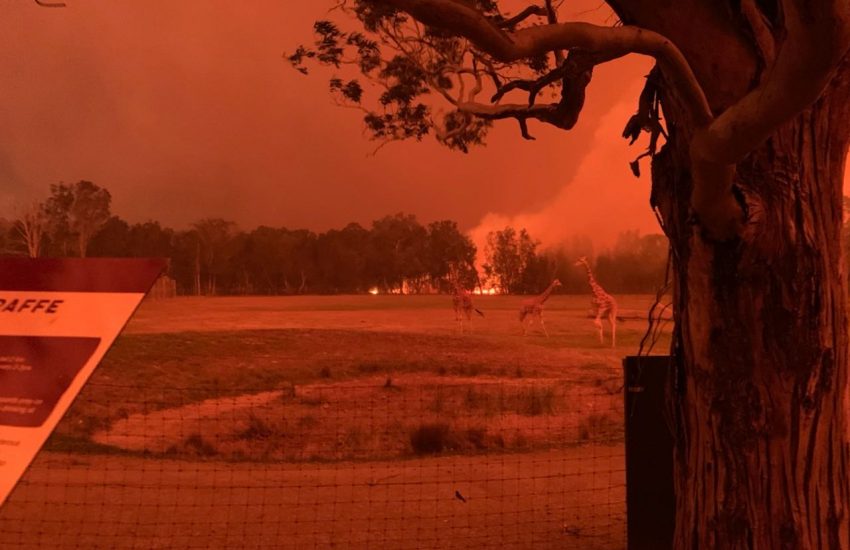 Day two of my challenge and disaster struck.

[Note: this post has been edited to update details of ways to give and support bushfire victims.]

It was an apocalyptic style disaster of epic proportions, with bushfires raging along the New South Wales South Coast, tearing through the small towns of Mogo and Cobargo.

Like many Canberrans, I know the area well. We often holidayed at Bateman’s Bay and surrounding areas, and have enjoyed coffee and ice-cream stops at the cute, historic town of Mogo. When the news came the day before yesterday advising people to get out, I still didn’t realise how bad it could be.

That could have been us down there.

We were only at Tathra a few days’ before Christmas, and we could have easily stayed too long and been stranded at the Bega showgrounds when the Brown Mountain road was shut. Or we could have decided to go down with my Dad for a day trip to the Bateman’s Bay area, misread the weather or failed to read the advice, and been trapped along the beach. My Dad was fishing at Mallacoota for his birthday in early December and was watching the footage on the evening news in stunned disbelief.

I am not personally affected by this tragedy, but I know many who first or second hand are. My Neil has an Uncle who has been evacuated – he is safe with his daughter but we don’t yet know about his house. He has only recently renovated his kitchen, and also has a prized collection of items from the British Royal Family. [Note: edited to say his house is safe. The house across the road burned down. Some of his front garden burnt, and someone stopped to put out the fire before got to the house.]

The question then, from this frugalista doing a decluttering challenge, is ‘what can I do to help?’.

Instinctively, I want to give away stuff. All that stuff I no longer need or want, to those who have lost everything. But I’m holding that temptation, at least for now.

My Neil – away overseas with work atm – has been in the NSW Rural Fire Service for 11 years. So I value his advice about what people need in the immediate aftermath of a fire. In his words, “what they need isn’t things, they have been traumatised and need empathic people to just let them tell their story“. And actually, when I think about it, this is so true. When you have been through trauma, the first thing you need is emotional support – not people foisting stuff on you.

This is a time for generosity but also important to be mindful about doing so. As many people declutter in January, giving is probably at the top of our minds. The issue is ensuring that you give the right things to the right people or organisations who need it. Volunteers are already working overtime and sorting through and disposing of junk can be a distraction.

One way to give mindfully is to donate items through Givit. Givit has a dedicated bushfire appeal, although at the time of writing it had not yet focused on the South Coast. Givit posts a list of items that are required, and you can respond with a picture of what you have. This means that charities don’t end up with, say, thousands of blankets when they really need nappies. Or something else random that they need to dispose of.

HOW YOU CAN HELP BUSHFIRE SURVIVORS
LIST CURRENT AS OF 9pm, 2 JANUARY 2020

And while there will most probably be calls to support particular people or causes in coming weeks, at the time of writing, the roads to the coast aren’t even open so getting stuff to people isn’t an option. So instead, Neil advises donating money to a recognised charity that has a dedicated bushfire fund, for example:

N.B. I’ve edited this post to provide further links to information about people, organisations or services that want support. I’m updating these links as I receive more information. Contact me if you would like me to add to this list.

Resources re how to support bushfire recovery in a meaningful way

In coming days and weeks, there are likely to be more calls for assistance to help rebuilding. I often like to support local service clubs such as Rotary, Lions Clubs, the CWA, Zonta and local Life Saving Clubs. These groups are active in their local communities and they know what their communities need and want. In addition, local radio stations are likely to post news about what is happening and how to support. It’s more than stuff – they may need volunteers.

GIVING, BUT NOT TO THE BUSHFIRES

So I didn’t give away anything to bushfire victims yesterday. I didn’t do anything virtuous. But my Dad came to my rescue with my challenge. He commented that he liked my homemade olives, so I gave him a jar.

And he was reading about Elizabeth Macarthur in the newspaper this morning, so I gave him the thoughtful and fascinating biography of Ms Macarthur written by my friend Michelle Scott-Tucker. It’s a fabulous book and I’m sure he will enjoy it as much as I did.

So, readers, I would like your help. Do you know about charities/organisations in bushfire affected areas that are accepting goods by way of donations? Do you know of organisations that need help? Have you personally been affected by tragedy, and if so, how can we help you now, or what lessons or advice do you have for others? And what are you doing to help others in this time of crisis?