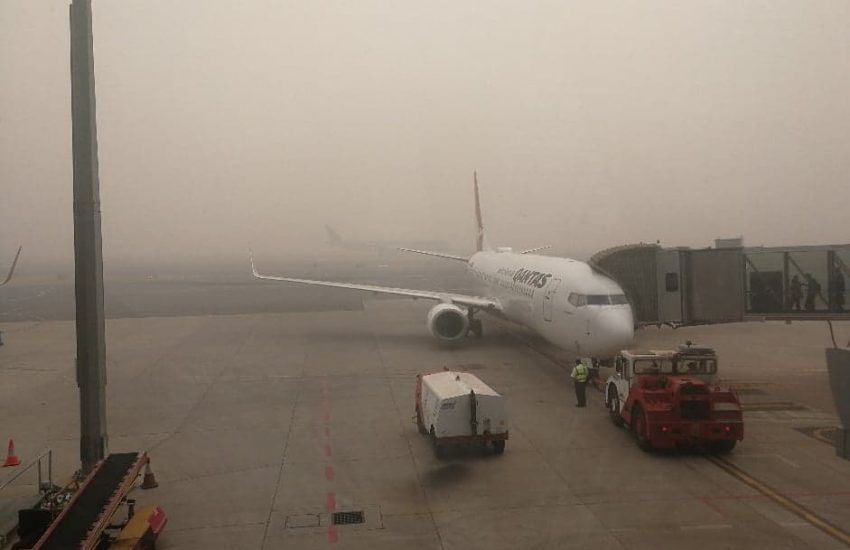 Day 4 of the challenge and Canberra was again carpeted in thick, choking smoke. I drove my Dad to the airport, picked my kids up from their dad’s place and that was it. The rest of the day was spent indoors

Atmospherics on the home front were better. My kids still couldn’t go outside, but they were happy to watch Ghostbusters (the1984 original) and eat popcorn. We watched together while I sewed up some granny squares into a crochet rug. I’ve been trying to interest them in movies for ages, and this was the first they liked. We watched this one on my Amazon Prime membership – the first time I have done so. I was surprised by the extent of their offerings. At $6.99 a month (which includes priority delivery on Amazon items), it’s cheaper than Netflix.

Meanwhile, Canberra has been placed on alert and evacuation centres were set up in Dickson College and the Queanbeyan Show Grounds. Friends were posting their bushfire survival plans and packed suitcases on Facebook.

I’m continuing to update my post from day 2 about ways in which people can help those who are affected by the crises. It remains hard to know how to help in a meaningful and constructive way, and that’s compounded by the fact the worst of the crisis is not yet over. But there are some initiatives that require support including:

So what did I drop off at Vinnies?

Vinnies was already well-stocked with a selection of quality clothing for children and adults. They also had toiletries such as cakes of soap and wanted clean underwear. I discovered a whole range of mini shampoo, conditioner and soaps and took that along. I also contributed some shampoos that Neil had gotten for free some time ago. I added a small jar of coffee and two small sports towels.

It was great to catch up with my friend, who is a truly beautiful soul, and to hear how Vinnies staff at all stores are receiving and sorting donations of quality items to give to those in bushfire areas. I had never thought of just dropping off to my local op shop!

And in the afternoon, I finally had some success giving away to someone in my local Buy Nothing Project.

I love Buy Nothing, and I’m currently training to be an admin. It’s not as snap your fingers quick to give things away as depositing at an op shop. But I love connecting with people who share the same values of community and sustainability.

I was a bit miffed that two other people who had said they would take things decided against them. I had hurried back from dropping dad at the airport rather than lingering to be there to give someone a kids’ game, only for them to message me just before they arrived to say they had changed their mind. But this is part of the slow giving journey. Actually, I am overdue to go to another person’s house to pick up another item so I’m hardly the best at picking up on time. It’s part of the give and take that goes with being in a community.

So finally, I gave to a charity to support the bushfires. But based on the low demand I saw, I’m still not sure if I gave things that would be useful. Thank you to everyone who has been updating me with information about how to support and where to give to support South Coast bushfire survivors and those evacuating through Canberra. Fingers crossed for the forecast 42C and windy conditions tomorrow!