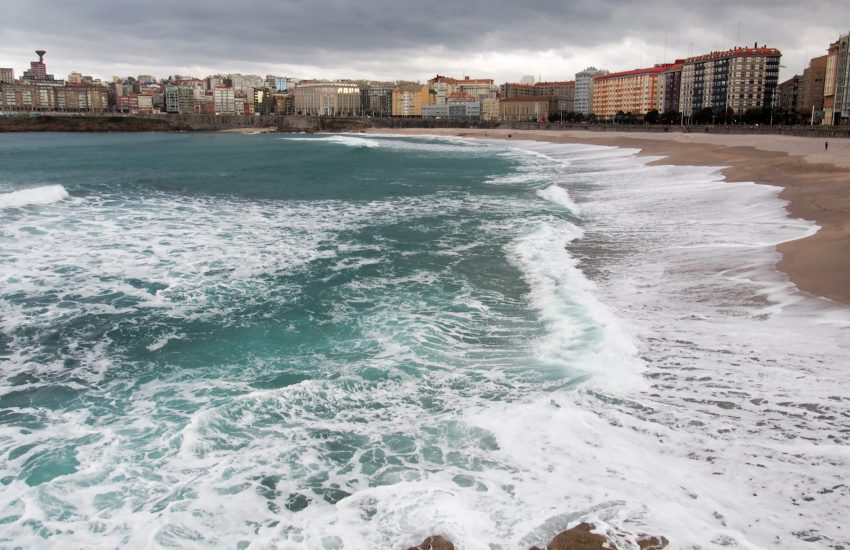 I had been looking forward to reuniting with Neil in Spain. But it was not what I expected.

For one thing, we are sick. Neil spent a night with a fever and woke up tired and complaining of feeling achy. I convinced him not to go into work. He slept most of the morning, we went out briefly around midday, then he slept for most of the afternoon.

When he got up late morning, he decided to take me for a walk to the beach. I was surprised to find it was only five minutes’ walk away.

With the weather cold and rainy, walking along a beach watching the surf from the Atlantic Ocean crashing into the beach was interesting, but for obvious reasons, we didn’t linger long. Even though Neil was rugged up in many layers, I was worried about his cold. Neil said that despite the cold weather, only a week ago there had been people swimming in the surf.

We went shopping together briefly, then went home and I made sandwiches for lunch. Neil slept, while I did some more writing. (Yeah, living it up hard in Spain!) Then just before the shops shut for siesta, I ventured out to the pharmacy to buy more cold medicine. I was proud to have managed to speak enough Spanish to be able to buy a) paracetamol/panadol, b) vaporub, and c) an antihistamine based cough syrup, which proved very useful for helping sleep at night.

Meanwhile back in Canberra

Canberra has survived smoke haze for six weeks, welcomed and helped evacuees, and survived two massive hail storms. Now, it has asked for help because local businesses – especially those in hospitality – are suffering. Given the decrease in bookings in my own AirBnB, this sadly comes as no surprise to me. VisitCanberra has launched a #holidayherecbr campaign. They are encouraging people to holiday in Canberra, and to share their snaps online.

I’m away until after Australia’s Day. But can I just say that if you are thinking about where to visit over the Australia Day holiday, Canberra is awesome. Last year we attended the breakfast Australia Day service. It was an amazing, patriotic moment seeing the huge Australia Day flag being paraded past by the Australian Federation Guard.

Since starting this challenge on 30 December, I have given away at least 54 items. The real number is more (e.g. I didn’t count every single mini bottle of shampoo and conditioner I gave to Vinnies in early January, nor did I count every single item of clothing that I gave to an op shop).

“You’ve mostly been giving away clothes and books,” said my Neil. “You’ve got a lot of those!”

He’s right: at this stage, that’s mostly what I have been giving away. And I do have a lot of clothes and books. I/we are yet to do any of the really hard stuff like exploring what’s in the cage in our apartment’s car park, or the items in the shipping container at Neil’s parent’s place.

The point is that I made a decision to start somewhere. I know what it is like to feel like you have so much stuff that you don’t know where to start. It doesn’t help that TV decluttering programs like to dramatise things by creating mountains of ‘stuff’. The best way to start decluttering is to do it one piece at a time. And to start where you are.

I like to pick up an object I haven’t used for a while and contemplate whether or not I want it. If I’m not sure, I keep it. If my honest answer is that it is not serving me any useful purpose, then I either think of a friend to give it to, or take a photo and put it up on my Buy Nothing Project group. Then I put that near the front door. That way, if no-one on my Buy Nothing Project group wants the item, I can find pick up some items when I know I am going past an op shop. It also avoids that item going back into the shelf/drawer/hidey-hole it came from.

I first tried this method three and a half years ago. I decided that ‘sometime’ in the next twelve months I would sell (what had been) the family home and move to a smaller place closer to the city. I didn’t know when; as it turned out I moved to a three-bedroom inner North apartment in less than six months.

A few days’ later, I was in the kitchen contemplating how I would need to downsize when I noticed a coffee machine lurking in an alcove. It was an old fashioned drip-filter coffee thing. We’d had it for years. I don’t drink coffee, but my ex bought it to use when we had people over. Maybe I’d used it half a dozen times in total. Anyway, it wasn’t something I used every day – I only put it on when I had visitors over who drank coffee, and these days most people don’t like drip filter coffee anyway. It needed a wash as it had a layer of dust on it.

I made a decision right then and there to give away at least one item a week. It was the middle of winter and I didn’t feel like getting stuck into the shed or under the house to have a good cleanout. But I realised that would I could do was to get rid of the odd bits of clutter around me. Starting with the drip filter coffee machine.

I took a photo of it right then and there and listed it on my local Buy Nothing Project group. A lady who needed a new coffee machine for her work coffee drinking club really wanted it. She was delighted to come and pick it up. One less thing to wrap in newspaper and bubble wrap to pack and unpack in my new place! Three and a half years on I haven’t missed this coffee machine at all (other than thinking about it for this post). I now have an ALDI pod machine (gifted through the Buy Nothing Project group) that I provide for AirBnB guests or coffee lovers who come over to visit. I know that if I need another drip filter coffee machine I can always buy one, but there isn’t really room in my apartment kitchen anyway.

Neil invited his two Australian workmates over for a simple evening meal of spaghetti bolognese. Neil finishes up two days after I leave and has to use up things in the house. Plus with the cold weather and feeling a bit blah, neither of us wanted to go out. His work colleagues are lovely and I enjoyed learning more about them. (Truth be told, I was tired, unwell and not really in an entertaining mood, but when it is more about connecting than impressing it doesn’t matter if things aren’t perfect. I was glad they came over.)

As they left, I offered up some Delicious magazines.

“You’d really be helping me as I want to give things away,” I said.

“Well, if you insist,” she answered while happily taking them. She doesn’t plan to cook while here as she is staying in a hotel, but she loves reading cooking magazines.

Just like any goal, decluttering begins by focusing on one item at a time. Have you ever tried this method to start decluttering and/or downsizing?