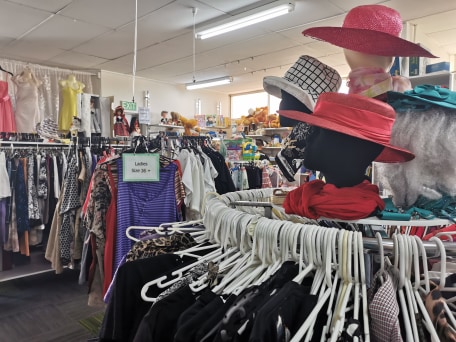 Most frugalistas have their favourite op shop. Another Chance in Scullin (Canberra) is mine.

It’s a hard call to identify your super, super favourite but I’m pretty sure on this one. It’s tucked in a funny spot in the Scullin Shops, so it’s one of these places that only locals in the know will go to. But do go, because it’s good.

While I was in Melbourne, I was telling my cousin (DJ Paz) how to try to give things to op shops as a last resort. He was a bit confused about this. To be clear, I actively support several local op shops. And I donate to several op shops. But with many of the larger ones, I see that they are overwhelmed with people’s generosity and they simply have too much stuff. They really only want extremely good quality items. They pay rent and wages and run like a business. It costs them money to sort through and dispose of items they cannot sell.

Consequently, I am careful with my op shop donations. I tend to give them things that I know I have seen in their shops, and therefore I know they will sell. I know Another Chance, Scullin, often welcomes items and I know that they are a church-run organisation (Baptist Mosaic Chuch) and that they are active in my community.

I rocked up with two bags – the first containing kitchen items and the second clothes. “Oh, good,” said the shop assistant. “Kitchen items always sell really well for us.” I also gave away some clothing, and I hope that what I donated is in keeping with what their customers want. I’ve bought so many beautiful outfits there (including an $8 blue and silver dress I wore to a ball), and I love the op shop karma of giving back.

While there, of course I couldn’t help but browse. I’d seen on their Facebook page that they had some new jewellery in stock. I bought these wonderful silver amethyst earrings for $6.

They were tarnished when I bought them, but they came up a treat with this simple trick:

The surface looks unclear in my photo, but that just reflects the difficulty in photographing two shiny things that are really close. It sparkles in real life!

Once again, I ended up accumulating a few things. But this time I gave away more than I received.