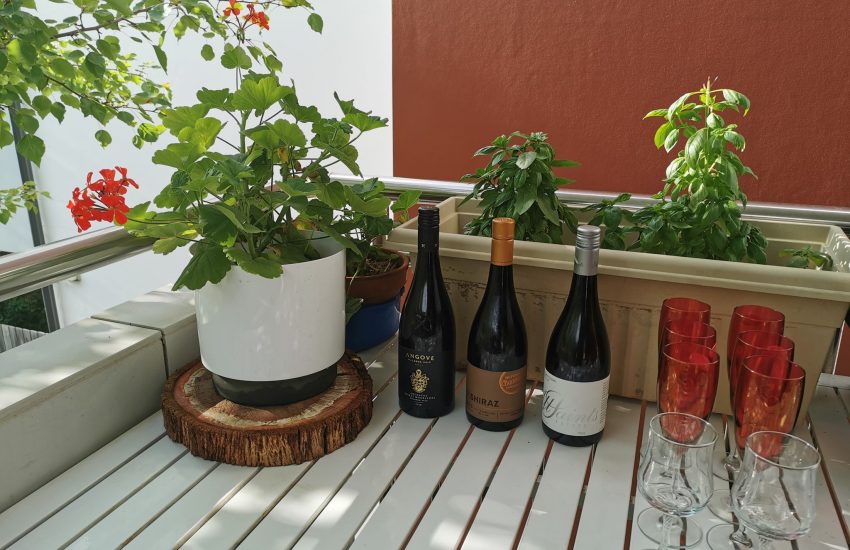 The theme for our weekend was the kitchen. And it was warm and fuzzy nesting experience.

We had a large social Sunday planned: our church had its 50th year anniversary, and following that we had a group of friends from Canberra’s food blogging community come over to dinner. Knowing that we would be out most of Sunday until the afternoon and that we would then have people over, our focus was on getting the house (especially the balcony and kitchen) in order.

First, the balcony. When I bought this apartment three years ago, I had dreams of entertaining out there – of having drinks with and dinner with friends. And growing lots of herbs and vegetables. Yet somehow, it hasn’t quite happened.

For one thing, my white outdoors setting is too large. I am still using it because it works, and using what I have is cheaper than selling it and buying a new one. But being white, it picks up the dust easily and after the crazy smoke haze and dust storms in recent months, it looked awful. And the herbs: well, it’s hard to grow in 40C+ heat. We’ve got some basil going, but not much.

But on Saturday, my lovely Neil transformed this space. He got in there with a broom and some water and he did a huge cleanup. When our guests arrived, I thought we would eat inside but as it was a 30C or so afternoon, most people opted to sit outside under the shade of the Manchurian pears. And it was such a lovely spot.

The balcony cleanup brought me so much joy. What had previously been a messy space in need of love is now an oasis of love and harmony. It made me wonder why we had put it off for so long? (Oh, that’s right, Neil had been away and we lead busy lives. Thanks Neil for creating such a lovely space.)

The other thing we focused on was the kitchen.

Following my wonderful and informative chat with feng shui expert Skye Alexander, author of 10-Minute Feng Shui (stay tuned for the podcast), I was inspired to focus on decluttering the kitchen. The kitchen is important for attracting abundance and prosperity. Home cooking is important for that, too. Just by turning on your stove and cooking you can help to manifest abundance. And a cluttered kitchen indicates cluttered finances. Time for a tidy-up.

The first thing I tackled was my kitchen utensil drawer.

It was a mess!

I had a much larger utensils drawer (plus somewhere to hang items) in my previous house. I’d stuffed everything in this drawer waiting for the perfect time to get around to cleaning it up. Then, I met Neil, he moved in and he added some kitchen utensils of his own. Oh, and this isn’t everything: I had other kitchen utensils (that I harder ever used) in a kitchen cupboard. I love to cook and I love to buy random kitchen cooking things.

Whenever we wanted to find something (on average several times a day), there would be this sense of “Aaahhh, noooo, where was this thing? I know it’s in here somewhere. Damn stuff. Why can’t I find what I’m looking for? I hate this.” Now that I think of it, that’s a lot of negative energy right there.

I took everything out and put it on the bench, then I wiped the drawer out. What I liked about this exercise was the next step. Neil came over and together we started going through things. “I like this flipper – it’s really good,” said Neil. “Do you want this, because I’ve never used it,” I said about something else. One by one, we went through everything and decided what we wanted and what we didn’t. Neil put many of the longer utensils into a separate container on the benchtop, and put only what we actually used and needed into the drawer. We kept four pairs of tongs because we use them, but got rid of a lot of stuff that we never did actually use.

Honestly, it felt so sweet. It felt like we were deciding, as a couple, on how we wanted to cook and what sort of meals we would create. I know it’s only a small thing, but I felt it was symbolic. To me, the kitchen is the heart of the home. I bought my apartment before I met Neil, and I have often felt that things are not truly joint. Yet. This was was like creating our nest: cleaning up and deciding what we wanted our future meals together to be like.

Part of my reason for decluttering was that I planned to a utensils swap with my foodie friends. Well, it was sort of successful for that and sort of not. Sometimes I feel like I’m an abundance magnet or at least a magnet for ‘stuff’. Many of my friends bought stuff and I probably ended up with more than before they came. And there were some fabulous things: a mini sushi maker, a silicon mould you could use to make blossom shaped pancakes or fried eggs, and dumpling moulds. I was reserved in the new things I gained, and managed to gift five items.

By the way, doesn’t my table look pretty?

The table runner was gifted recently through my local Buy Nothing group. The tea light candleholders were also free via my Buy Nothing Project – they’ve been in my cupboard and I don’t use them so much.

While cleaning the kitchen, I also decided to get out my dinner set. When I turned 21 years old, my mum gifted me a beautiful black and gold Mikasa dinner set. I haven’t used it for several years – I can’t remember when I used it last, to be honest. It was great to get it out and use it to serve my guests.

One of the things I cooked for the gathering was sourdough bread. My friend Serena who blogs at anything but toast asked, somewhat shyly, if she might, perhaps, be able to get some starter from me. She’s got a wood-fired oven at home and has been looking to get into sourdough. No worries! I anticipated this and had some starter all ready to go!

And just to gloat a bit, look at this amazing food that people brought around!

Having people around is a bit of work. But it’s much more cost-effective to have people over and do a pot luck meal than going out regularly. It’s a whole different feel. For one thing, people aren’t stuck in their seats and they can wander around. They can help themselves to something to drink, and you if you’ve got kids, they are much more settled being at home.

I also invited the Mum of one of my eldest son’s good friends. Her son is a year older and taller. A few years ago, I was given a set of boys clothes. They were too big for my son and have been in a suitcase ever since. The only problem is that my son doesn’t like to wear jeans – so I gifted two pairs for her son. And she turned up with a bag full of shirts and a pair of shorts that are the perfect size for my son. Why throw out when you can regift?

Also through Buy Nothing, I gave away this cute overnight bag. My sister, Spring, gave it to me several years ago. My sons previously used it as an overnight bag. But now, well, they’re not that into pink and love hearts. I really like this but I have another overnight bag I use so this is excess.

The lady who picked this up is an academic with a fascinating area of research. She is also committed to championing a positive policy response to climate change. I was glad to connect with her as she is about to move to Melbourne for a new job, and it was good to connect.

Overall, I think I received more than I gave. That was certainly true of food, wine and friendship. But more than that, I’ve discovered yet another friend has become converted to decluttering. My friend Serena has been inspired by this Serina (i.e. me) to join her local Buy Nothing group and start giving things away. She’s really gotten into it, and in the last two weeks has given away heaps of stuff.

“What I really like about the Buy Nothing group is that you can give away items that an op shop would not be able to accept,” she said. “For instance, I gave away an outdoor wall planter that I had previously used. And I gave away a can of Bondi Sands fake tan. I realised after one application that it was a lot of work – someone in my group gladly took it.”

Among it, I still managed to give a few things away: