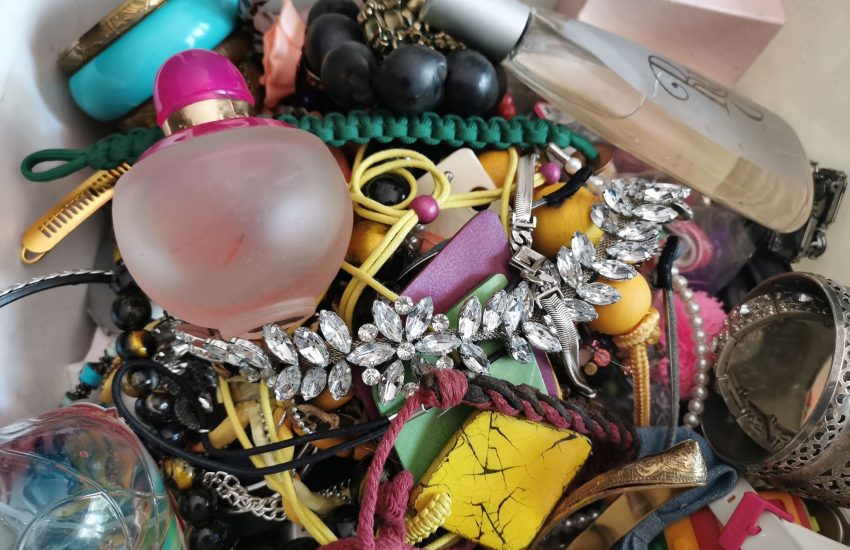 My quest to learn more about decluttering took me to an unusual source – a business based on items donated to the local tip.

The Green Shed has four businesses in Canberra that attracts around 20,000 visits each week.  One of their businesses is a fashionable vintage-styled op shop in the CBD.  A second business is The Underground, a below ground level treasure cave filled with all sorts of amazing things.  I bought an original Ted Baker dress from The Underground to wear to a pre-wedding family dinner (oh my, I felt glam). I purchased it for $50 (a lot for this frugalista).  New it would have cost around $1,000.  Recently, I bought a retro skirt dress pattern and some thick knitting wool for my son (yep, my son is into knitting).

Sandie, who owns the Green Shed, lives in a home that is decorated with all sorts of unusual things that she receives through work, including Lego. She calls the house ‘the Lego House’, and having visited there I can see why.

We took our tea and retired to the ‘green room’.  The room was decorated with a large, framed picture of Frederick the Great of Prussia playing the flute at court. She sat in her leather chair, with her pug nestled on her lap. She looked like royalty, and I felt privileged to be sitting in this pretty parlour room.

I was impressed. “She must be a real antique collector,” I thought.

Ah, yes she is stylish but no, these were not antiques. At least, not everything.

The painting, it turns out, is fully fake.  It is in a fibre-glass frame and is a cheap reproduction of a painting of Frederick the Great of Prussia.  Having had it for several months, and not having any luck selling it, she decided to hang it in her home.  The chair she was sitting on previously belonged in Old Parliament House. “Maybe a former Prime Minister such as Bob Hawke sat on it,” she pondered.

Sandie will be speaking at the Queanbeyan-Palerang Heritage Festival in April on the topic of what to do with all of your ‘stuff’. In addition to running The Green Shed, a business that sells items that might otherwise go to the tip, she also provides a service to help declutter homes (e.g. after someone has died or gone into a nursing home). She was the perfect person to chat to about #joyfulgiving366 – in particular stuff, sustainability and value.

“People hang onto things,” she said.  “For instance, people will keep China teacups.  They think they are high value but, in reality, a trio will only fetch around $15.  Meanwhile, they often won’t realise that the matchbox car they bought for their son, who played with it once before returning it to its original packaging, is worth a lot more.  People struggle to get rid of their stuff because they have a strong social and emotional connection to things.”

“I’m turned off stuff actually,” said Sandie.  “It’s hard to tell people, who are tied to their stuff, but at the end of the day its just ‘stuff’. You don’t miss it when it’s gone.”

Sandie said she sees so much stuff.  “I think how insane it is, why are people still buying this stuff,” she said.  “A relative back in the UK recently said they had to find something to wear for a Christmas jumper day at work. I know what this means.  If this trend catches on, then millions of cheap, funny Christmas jumpers will be manufactured in Asia. People will wear them once, then they will end up at our places like ours to sell – or give away for free.” [Note: Christmas Jumper Day is actually a thing. And of course, you can knit your own or remodel one, and the money is raised for charity. The point is that many people will buy cheap, machine knitted jumpers made from acrylic that they will wear once then discard.]

At the end of our visit, she brought out a large box containing jewellery and other items that had been donated.  There was bling.  A LOT of bling. I was like a kid in a candy store. I must say the temptation to take it all home with me was strong. (Note: this had not been sorted and was not for sale – I was just experiencing a bower bird impulse. That said, she kindly gave me a headband that I plan to wear at a Gatsby night on our cruise in May).

“You would like working at The Green Shed,” she said.  Ah, yes, I probably would. Too much.  It’s probably just as well I don’t work there as otherwise, I would probably want to take everything home with me.

I came to visit Sandie almost empty-handed. I say ‘almost’ because I gave her a copy of The Joyful Frugalista (The Green Shed is in the book).  I otherwise resisted the impulse to give her anything as I figured she probably had more abundance than she needed. And I was right😊

I recently bumped into Jen Richards at an event that discussed food waste at the Australian Academy of Science.  I’d met her before at a Canberra Chatters event (the Canberra chapter of Chat 10, Looks 3).  It turns out that we have shared interests in food and sustainability.  I suggested we meet semi-regularly to write together – basically to encourage each other on our respective creative endeavours.  She was so generous with her time and gave me some great advice on a few writing dilemmas I was pondering over.

On a whim, I took along a jar of sourdough starter.  She was unexpectedly ecstatic (I was secretly relieved she didn’t think I was weird).  “I can’t tell you how much I appreciate this,” she said. It turned out that she had done a sourdough baking session at River Cottage in Devon (super wow!) but had not been able to take home her starter in her luggage to bring back to Australia.

As she is also passionate about reducing food waste, I gave her a copy of a Sally Wise book on using up leftovers – it turned out she is a fan of Sally Wise’s work and has two of her other books.

Oh, and I gave her a copy of my book as well. (Apparently, her sister-in-law listened to the audio book by Bolinda Audio and loved it – special shout out to Jen’s sister-in-law.).