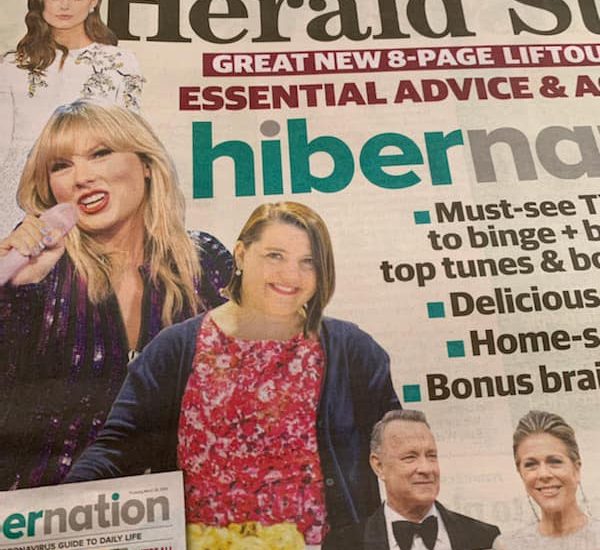 This week feels like it has just flown. Oh wait, that would be because I’m home-schooling now among everything else. And also, because it feels like every day things are changing. It’s hard to keep track of everything that is going on. Actually, I’ve almost lost track, but I do remember some of it.

Actually, it’s not hell – I just liked the title.

Working from home + caring for kids is a juggling act, but I’m not too worried about being a perfect parent. The biggest thing for me is making sure my kids are relatively happy and sane during this difficult time. It’s such a difficult time for them. It’s hard not to be able to socialise with their friends. My eldest is upset the NRL season is cancelled (he’s a massive Raiders fan), and that he is unlikely to go on school camp. The youngest has been having nightmares of a giant snowball crashing through cities killing people. He said in his dream, the educators at after school care made him and other kids stand really close to the approaching snowball and he was scared as he could see the ice was pink with blood … It goes without saying that he is having trouble sleeping.

Noting how scared they are, I’m not being overly disciplinarian with their school work. But that doesn’t mean they are on holiday! These are some of the things we have in place at home that are working for us.

Who would have thought that sourdough was the next big thing? I’ve given away more sourdough starter – three to be exact – and I keep getting asked to give away more. One of these was for one of Neil’s workmates, who was driving to Melbourne on Friday and wanted to give it to his wife.

Not only that, but I’ve got several friends who are making their own sourdough starter from scratch. Knowing about making sourdough is the next big thing. For those who can find flour, that is. Luckily we stocked up before this craziness began. Oh, to see my sourdough recipe on Australia’s Best Recipes, check it out here.

I’m hosting a ‘how to make sourdough’ Facebook live session. Join me at 8.00pm on Monday, 30 March and come prepared with questions.

One issue to contend with this past week has been AirBnB.

Out of curiosity, I checked and I have had 13 cancellations in recent weeks due to COVID-19. It’s a fast-changing situation, and travel advice and #statathome advice is changing daily. My Scullin AirBnB was booked for two people this week. Both cancelled. Then it was booked again by a repeat traveller who was coming to Sydney with work. He was still coming … until late Sunday night (the night before he was due to arrive). I didn’t quibble with him or try to collect part of the charge. It’s a difficult time for many, and it’s best that he not travel in order to contain the virus’ spread. The problem was that he was still in the AirBnB system as being there, and it took me three days to get in touch with AirBnB to cancel and refund his payment.

Then I had a booking for 63 days for a Canberra couple living in Kazakstan. Sweet! Only, they also had to cancel. The lady who made the booking rang me in tears from Atyrau, distraught they couldn’t manage to fly back to Australia due to cancelled flights and worried I was going to keep half of what they paid for their accommodation. I talked her through the cancellation process and then followed up with Airbnb to make sure she got the full refund.

Once I managed to sort out the most recent cancellation, I got another firm booking. This time it is for a man who manages a supermarket and needs to be quarantined from his family. It’s a stressful time for everyone, and I am glad that I am able to offer safe, comfortable and low-cost accommodation at this time.

It’s been up and down and at times stressful being an AirBnB host. Sometimes I feel like a counsellor helping people who are upset and emotive during these difficult times (and at times, I’m upset myself and worried about the impact of loss of income). I could get angry about the cancellations, but it doesn’t help anything. As a host, I’m in this for the long run and I’m committed to showing integrity and building long-standing relationships with my guests. I guess that’s why I am a Super Host. I treat my guests with respect and they come back again and again.

I also want to add that AirBnB has been helpful and supportive through this. While it has been difficult to get hold of their helpdesk due to the unprecedented demand, when my requests have been actioned, their staff go above and beyond. Have I thought about going back to renting? Yes, but in the end, I’ve decided to weather this storm. They are a good company and they are adapting to this. They are finding ways now to promote local AirBnB to people needing isolation. And they are also offering hosts the opportunity to provide free hosting to help healthcare workers who need to be close to their places of work.

Online communities are becoming increasingly important as we muddle through isolation. A challenge for organisations such as Buy Nothing is how to give through this.

Am I still giving? Yes, in certain circumstances. I’ve been giving away sourdough and I am more than happy to give away food supplies. However, I’m not personally giving any items online or elsewhere until this is over. When I do gift items, I’m especially careful to make sure I wash my hands before touching anything, and that where possible I don’t gift in person.

I had a great session with the admin of a neighbouring group yesterday to help me learn more about how to better support my own group. I met her in her home, and we were super careful to avoid touching. I did have a cup of tea, but I made it myself, I used a paper towel to touch surfaces and put a cloth down over my stool. We then sat 1.5m apart. Overreaction? Maybe, but better safe than sorry.

The #stayathome message is important. But this week, it led to an emotive exchange of views during an online group I belong to.

People are stressed to breaking point, and people who are older and who have conditions that weaken their immune system are especially concerned. The internet is full of messages to #stayathome. We are trying to follow this directive, but there is one giant problem: my husband, Neil is not allowed to work from home and is required to go to work each day.

Yep, you read that correctly. And it’s not just him, either.

The advice is unclear. On the one hand, the APSC says that “Agencies should also be considering how employees can safely work from home, where appropriate.” Some departments are encouraging most staff to work at home, or 50% of the staff to work from home one week, and 50% another week. My husband, who works on a shipbuilding project that is currently stalled as it is in lockdown due to the coronavirus, has been told that he is deemed to be providing an essential service and is not allowed to work from home. He has tried to raise his health concerns (heart attack, lung cancer and two major pneumonia incidents, the last one which put him in ICU for several days), and has not been granted an exemption. A single mum employed at my former department told me she has been told that from now on, any work from home has been discouraged (despite the fact that her primary school-aged son is now home from school.)

Frankly, I’m appalled by how this is being handled for a number of reasons.

I’m really disappointed that more isn’t being done to enable APS officers to work from home, or at least efforts to try to keep them safe and ensure they are supported at this time. If they are essential workers, where is the support in the form of things like face masks? Apparently, there are some hand sanitizers, but as there is a shortage there isn’t enough to go around anyway. I’m worried about my husband, and I feel for my friends who are still caught up in the system.

I’m up and down and roundabout. Friday night I really crashed; I was worried sick about hubby going to work, worried about my kids, and burnt out from the home learning + working from home + keeping positive routine. The trigger point for me was Neil wanting to watch the news to ‘find out what was happening’. I can’t handle the news right now. Well, I can sometimes but not all the time, and only in moderation.

In response to all of this, I’ve created a new page on this website dedicated to building resilience. I’m including links to reliable sources of information, ways to handle stress, small business information and investment guidance I find useful. I hope you are able to use this resource. If you want me to add anything, please do let me know.

And I recorded and released a podcast with decluttering and organisational coach Lauren Winzar. Lauren shares her journey with anxiety and depression and has some tips for staying sane while working from home. We could have chatted for hours.

And then there was this:

Spotted by my Aunt. I nearly missed it as I was super stressed out and had put my phone on silent (and wasn’t checking messages). My Dad had seen it and also tried to all, and I nearly ignored his call, too. I really struggled with the $40 two-week meal plan. I wrote it a few weeks ago and did my best to research prices. But so many prices have gone up even since then, and I feel for many families right now.

How are we surviving at home?

Like many frugalistas, we’re surprisingly prepared. We’ve got 35kg of rice (still using what I bought 18 months ago!), baker’s flour, sourdough starter, powdered milk and a freezer with lots of unidentified frozen objects. At no point have we rushed out and engaged in panic buying, and in fact overall we are buying less than we usually do. We’re not buying meat at the moment as it’s expensive, and will bulk out my freezer finds with beans and lentils.

I’ve given mushrooms, parsley and other stuff to my neighbours, and but for the current #stayathome restrictions, I would give away more food to anyone who needs. We feel blessed with our abundance and our hearts are full. We’re thinking of people doing it hard at this difficult time. I’ve donated to Foodbank, and I am aware that a lot of people are suffering chronic food security issues.

That’s it from me. Stay safe and sane during these difficult times. One day at a time, one thing at a time.