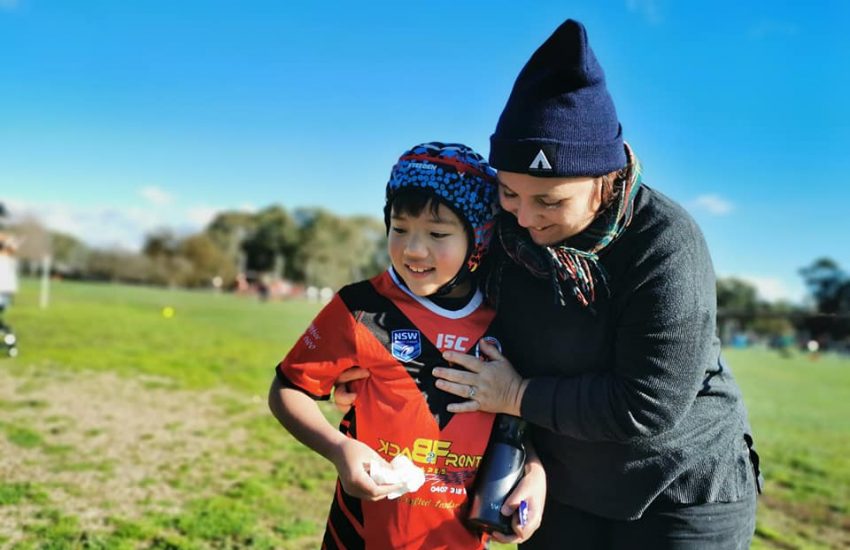 You might wonder – where the (bleep) has she been? Well, but to semi life as normal, although like many, I’m not sure how long it will last. And with that is a lot more running around.

The big thing keeping me busy has been the start of the footy season. My boys have enthusiastically taken up NRL this year. They begged me to play.  I never really played much sport growing up, and my motherly instinct is to want to pad them in cotton wool and keep them safe.  But they really love it, and so, Tuesday, Wednesday and Thursday nights (note: it’s really cold in Canberra) they are at training. And yesterday, we started Sunday mornings as well. As in a full half a day, in freezing winds clutching a thermos of hot tea …

And, we had a short mini break visiting friends at Tathra over the school holidays. The weather was wild! So much fun watching the waves crash into the shore (but glad we weren’t too close!)

In the middle of all of this, my eldest son got sick with a cold and spent nearly a week at home. It also involved taking him to get tested for COVID, a two hour exercise. The staff were super lovely and understanding about how scary it can be for a little kid to have this test. I was so proud at how brave he was. Thankfully, we got a ‘negative’ result within a day. It’s such a worrying time and I’m in regular contact with my Dad, in Melbourne. It feels like an odd bubble of normality in an increasingly not normal world.

And as often happens (at least with me), I’ve taken on a few more things. I’ll blog about that soon. But first, back to giving.

I don’t know about you, but my energy starts to slow down in winter. A Traditional Chinese Medicine doctor once told me that humans – not just animals – need to hibernate in winter. I’m not listening too much this year: I’ve taken up jogging (albeit it slowly), and compared to this time last year, I have a lot more energy. I think it has a lot to do with the fact I am no longer in a (what I considered) toxic workplace.

But that said, I accept that in winter I am less keen to spring clean the house and more interested in staying indoors and being cosy. So I’m doing a minimalist job at minimalising:) Basically, I’m doing the bare minimum of giving – at least until spring – but I’m still giving. Giving is a habit: you need to practice it regularly and there is never an optimal time. You’ve just got to keep on giving.

The lovely Liz Walton fertility coach came over and shared her story on the podcast. This is one of the rawest podcasts I have done to date. It’s such a touching story. And as someone who struggled silently with infertility for years, I’m so glad she got to share her story. Because infertility is real, it’s an emotional roller-coaster – and it costs a bomb.

While Liz was over, I thought I’d see if there were any of my kids items that her four year old daughter, Willow, might like. And it turned out she did.

First was a box full of cube things you could assemble. Well, not quite cubes – something to create and build with, basically. It was almost new as my boys had never gotten into it.

Then I brought out some ski pants and jacket that my youngest had grown out of. It turns out that Willow had recently asked her mum and dad if she could go to the snow this year. So now she has an outfit! I can’t wait to see her fun adventures.

Just as Liz was arriving, someone from my Buy Nothing group came over. He had put a call out for boxes. “I’ve got one,” I said. Well, it turned out I had two so I hurriedly emptied the contents from one of my donation boxes into another plastic box. It overflowed into another box (I did say I was slow giving during winter, but I have a lot ready to gift!) It was still dealing with the overflowing as Liz arrived.

In our underground carpark there was a whole stack of boxes. We’re not sure what happened, but we think someone left stuff behind after moving. In any case there were a lot of boxes that were just clutter.

Cardbox boxes are one of the most popular items requested in my local Buy Nothing group. We’re in an inner city area near the Australian National University, so people are often coming and going. Why buy a new box when you can use an existing one? Saves the environment, your wallet and probably also your time.

We’ve now got into the habit of taking things with us whenever we go and visit my inlaws. They don’t seem to mind – if anything, it’s a bit of a ritual for us to rock up with a bag of new/old things to share.

This time it was more scraps for the chooks (x2), a giant jar of Moccona coffee (gifted from someone who is moving), an inflatable Jake and the Pirate Ship sword (was so cool with my kids like six years ago, but they’ve long since lost interest), a partly used Jake and the Pirate Ship colouring in and an activity book. Hubby also parted with a flannelette-lined winter vest. He’d found it while tidying up and hadn’t warn it in years, and my father-in-law really liked it.

There are more items that I have given away to come, which I will share in future posts. But this is a bit of a start at keeping up to date.

Do you regularly give things away to family or friends? Why/why not?