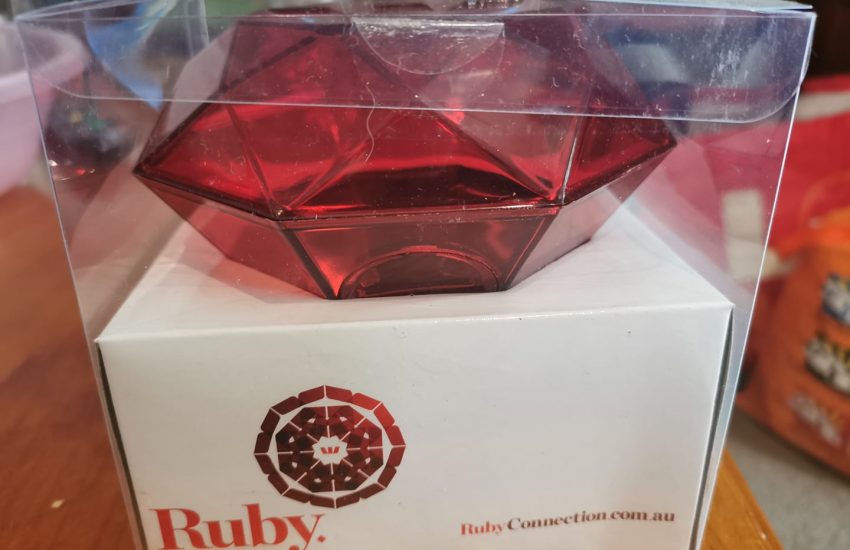 Sometimes you might think, “I doubt anyone will want that!” But unless you ask, you never know.

A few years ago, I went to an event run by Natassa Janssens at Women with Cents. It was a great event. And I came away with a swag of items, including a cute promotional red ruby money box by Westpac.

Being into savings in a big way, I already had several money boxes so I didn’t need another. I held onto this one for ages, thinking that “maybe, one day I would use it”. But then while searching for the keys to my ebike (sadly, still missing), I came across this money box and decided “money box, it’s time to go”.

I put it up on my Buy Nothing group, thinking there probably wouldn’t be much interest. But low and behold, someone really wanted it. It turned out it was for a fun/novelty Christmas present for her housemate, whose birthstone is ruby and who has a nickname to do with money. I’ve since discovered this is actually a collectible, limited edition money box so hopefully it will be treasured by its new owner.

Lesson from this is that just because something isn’t a treasure for me, doesn’t mean that someone else won’t treasure it. My clutter has gone to a good place.

Also through my local Buy Nothing group, I gave away three kids books. This was to a mum who lived a few doors down. A few years ago, there weren’t many families in this Buy Nothing Group but the demographics seem to be changing. It fees good to be able to give away some things that my boys previously loved.

What’s in the box?

Then I gave away a Japanese cube thing I have had for a while.

I had this box in with my kids toys for years – and they had never opened it. I can’t even remember where we got it from. A lovely Japanese lady, who has a three year old daughter, came and picked it up. I’m so glad it has gone to a good home.

She also took this silicone mould.

I have no idea at all what this thing is for. Is it for peanut shaped chocolates? Dog treats? Ice cubes? I’m sure she will have fun discovering a use.