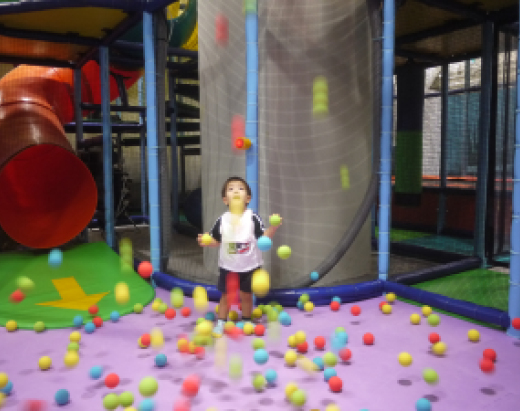 While hubbie was away last week, I took the kids on a special playdate to Leo’s Playland, a kids place across the road from the iconic Taipei 101 building.  Leo’s is an ultra modern, ultra clean indoors play area for younger kids.  There is heaps of room for the littlies to run around with staff to supervise the kids.  For preschoolers and up, you can sit back in their restaurant drinking a coffee while the kids run around burning up their energy.  In theory, anyway: I am usually too much of a helicopter parent to truly relax and let my kids run wild.

Leo’s is a special treat.  Although it is only ten minutes’ walk from our house, it is a bit expensive so we do not want the kids to get in the habit of going there often.  If we take them there only sometimes they look forward to it; if we visit all the time it is nothing special.  Since I was home alone (although admittedly on this Saturday I was spoilt by having our carer with us), I opted for Leo’s because it was an easy option.

There are two sections at Leo’s: a small, interactive area for babies and toddlers, and a larger obstacle course like area.  The larger area is the most popular with kids three years and up and is equipped with a trampoline, slides, lots of padded climbing areas, and hundreds of coloured foam balls.  The object here is to take a small, mesh shopping bag and fill it up with the balls.  You can then put the balls into guns and shoot the balls out at people, put them into a vacuum that sucks them up and spits them up in the air, or into a larger vacuum that goes into an overhead basket.  The kids love taking it in turns (or not if they are a bit naughty) to press a big red button.  When the button is pressed, a machine starts beeping, and just like a garbage truck, all the foam balls fall from a giant basket down on the ground.

Lots of fun.  So much fun that most kids spend hours running around picking up balls.  Big A is obsessed with collecting the foam balls whenever we are at Leo’s.  He just loves going around selecting each one and and putting it into his shopping bag.  I am allowed to help a bit, but mostly he wants to do it himself.  It is so cute watching his ernest, studied expression as he concentrates on the task of picking up the balls and stuffing them into hi bag.  We spent over three hours at Leo’s that day; Big A was so excited he could not eat dinner and yet still he would have stayed there picking up balls until midnight if we had let him.

How different is his willingness to pick up balls to cleaning up his room!  When it is time to put toys away, to stack the train pieces back in boxes, return the ping-pong and soccer balls to the cupboard and the model cars back into their bag, there is noticeably much less enthusiasm.  The day after we returned from Leo’s, Little A spewed business cards over the floor.  (Little A is an over-confident toddler with a fascination for business cards: we accordingly nick-name him our Mr Future CEO.)  Trying to get the kids involved in  picking up the cards from the floor, I enthused “look, it’s just like at Leo’s — wow, please help Mummy to pick up the cards”.  No response.  Oh well, I tried at least!

But this episode made me think about why certain activities are defined as ‘fun’, while others are ‘boring’.  Why is picking up foam balls less exciting than picking up business cards from the floor?  Isn’t it the same action — picking up stuff? And wouldn’t it be more fun to pick up toys rather than inanimate foam balls?

I think kids pick up cues from parents about what is fun and what is not so fun.  A close friend of mine has a smart mother, a primary school principal good at motivating kids.  When growing up, my friend was allowed to ‘help’ stack the dishwasher if she was extra special good. Helping her mother was a privilege that she valued doing.  And I bet to this day, she probably loves doing the dishes.

For now, I am yet to get the kids fully involved in helping out at home without resorting to threats or repeating myself silly.  But I am thinking perhaps I could try a different approach. As they say, you catch more flies with honey and at least it would make home life more fun.