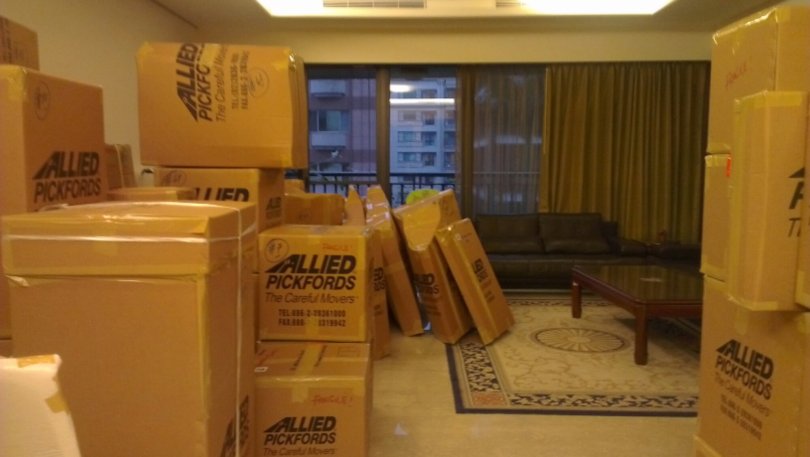 This week we packed up our life in boxes.  One hundred and fourteen of them to be exact.  There may be more, as we pack a final self-shipped box with extra things we are finding.  But most things are gone.

Gone are most of the kids toys, the bikes, the cushion Big A used to sit on every morning next to me when I *try* to meditate, my kitchen scales, my Victorian style China tea cups, our bed linen and blankets, flower vases, most of my makeup: even our rubbish bins have gone.  They are all headed on the five to seven week sea journey back to Australia.

In the meantime, for the next month we are still here we are living off a ‘settling in kit’ provided by my work.  This means we have basic bed linen and blankets, cups, bowls, plates, knives & forks, saucepans and some cooking stuff.  We are learning to improvise.  So far it is not too bad.  And we’re extremely lucky to have the support.

My husband and I looked at each other as the removalists were carting the stuff out of the apartment and down into the three mini-trucks that were waiting.  We both almost cried.  It was poignant moment of mixed feelings.  We are looking forward to going back to Australia, to see family, our neighbours, our friends, to clear skies and a backyard for the kids to run around in.  I am looking forward to sitting on our back deck in the morning sunshine and contemplating the serenity, and to some time off work and more time with the family.

But we love it here in Taipei.  I love being a ‘Taiwanxifu’ (a woman who has married into the Taiwanese culture).  I have now learnt my way around Taipei, can read most street signs, negotiate the morning wet markets, have conversations with taxi drivers and understand a lot of the odd cultural stuff (like, for example, I’m excited by Ghost month).  I love being out on a neon-lit Friday night, the delight in seeing what colour the iconic Taipei 101 building will be lit up in, grabbing a You-bike and just cycling to where I want to go, the buzz and excitement as Taipei gets ready for Chinese New Year, the smell of incense hanging thick in the air from the myriad temples and offerings twice in the lunar month.  It is my second home, my second identity, the country of my husband’s birth, the language and place they are most comfortable in.

For my kids, this is all they know.  Little A was born here, and has never been to Australia.  Big A arrived in Taiwan when he was just nine months old; he has been back in Australia on holidays, but won’t remember much.  He is currently in a Chinese speaking preschool and will miss not only his friends, but the language that he is most comfortable speaking in.

So hubbie and I looked at each other, in our apartment that now echoes and at our proliferation of stuff in boxes that seems to have sprung from no-where.  A moment of sadness of past memories and physical possessions disappearing, of joy at the future to come, and a touch of fear at the inevitability of change.  And of gratitude for the abundance in our life, for the opportunity to have had this experience in Taipei and of thanks for the help from our work and friends to make this last month without lots of ‘stuff’ bearable.

I am incredibly proud of my boys.  All of them (even the adult one) handled the change extremely well.

Our carer took Little A out during most of the packing.  This was a good thing, as the morning in particular was frenetic.  The packers arrived while hubbie was taking Big A to preschool, and the six of them spread throughout the flat, hastily shoving anything without a ‘do not pack’ sticker into boxes.  I had had ambitions of sorting through and decluttering as they packed, of going through the toys and putting things into sets and of binning unnecessary documents from the study.

But with six packers, I could not watch everything they were doing.  I tried to supervise, but it was impossible.  Most of the damage was done during that first hour.  We later found that two items of work property were packed by accident, and also some crockery and eating utensils we had wanted to leave behind.  But the worst was our discovery that most of Big A’s clothes had been packed.  It could have been much worse. Colleagues have regaled me with tales of people returning to Australia and opening boxes with great anticipation to find a dead potted plant or a rubbish bin complete with rotted contents.

Little A coped with the tail-end of the chaos okay, and only seemed upset when the final removalist left.  I think he liked that particular ‘Uncle’.

Then we bundled him into the car and picked Big A up from preschool.  To help cushion the change, we bought McDonalds take away and brought it home.  I thought Big A would be traumatised by the disappearance of his usual bed, nearly all of his toys and the starkness of the apartment.  But no, so long as he knew we had kept his favourite trainset he was fine.

To amuse the kids, I blew up some promotional balloons that a friend had given me for free.  They had sat in the cupboard for almost two years, and I now rediscovered them.  We all had so much fun hitting the balloons and chasing each other around with them.  The boys kept stealing each others’ balloons, so I blew up some more. Free fun:  priceless.

Then Big A wanted to check out his new bed, so we played a game of ‘five little monkeys’ jumping on the bed.  Little A is not quite eighteen months, but he LOVES this game.  His round little face erupted in smiles, and he ran to the bed and tried to climb on it.  He can almost make it up by himself.

Still more energy to wear off.  Big A now rediscovered a plastic skipping rope.  I can’t remember where it came from, but from memory it was part of a lucky dip present.  Previously he had been interested in it for all of five minutes, but now it provided nearly an hour of fun as he ran through the house with it and I tried to catch him.  Little A kept wanting to catch the skipping rope, too, so there were a few rough moments where I had to make sure the kids would not be dragged or strangled.  But they survived intact, and all is well.

Then down to sleep, in their new beds with new sheets.  Big A was a bit hyped up so took a while to settle, but was down before too long.  And not a single tear shed over the disappearance of toys, but instead excitement over balloons and skipping ropes.  I hope I can sustain this for the next month.