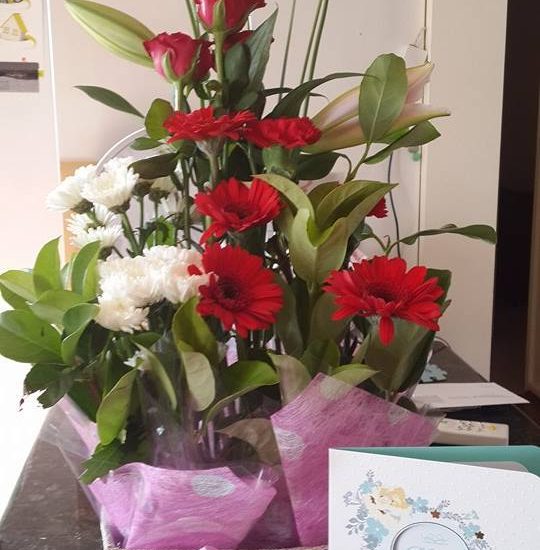 The Sunday before last was Mother’s Day.  My boys made some creative objects at childcare, which I treasured even if I will not keep forever.  Big A wanted to open the ‘to Mum’ present wrapped in brown paper and string.  As far as he was concerned it was his.

I slept in that morning as late as 8am!!!!  I heard the boys in the kitchen, and hoped they were making breakfast (no, alas no breakfast in bed but I still made a special smoked-salmon bagel breakfast for the adults and Vegemite for the kids). They did however surprise me with flowers and balloons, which they brought in the moment they could hear I was up.  I loved the flowers that my husband bought on behalf of the boys.  (I knew I was getting flowers because I stumbled on them several times beforehand as I ventured into the laundry the day before; they were still special, though!)

The best were the mini ‘Mother’s Day’ balloons that came with the flowers.  My boys had lots of fun hitting each other over the head with them, and just fighting over them in general.  They had one identical one each, but kept wanting to know which one belonged to who (I found a way to tell them apart after this became a theme.)

It was a happy yet relaxed day.  Other than church, we didn’t go anywhere other than a walk to the shops.  Hubbie volunteered brunch or lunch out, but I find that the crush of families out on Mother’s Day (and the jacked up prices) hard to take.  The best bit was having an extended Nana-nap in the afternoon, during which hubbie did some solid housework including two loads of washing and taking the garbage out.

Ah, household chores.  Something that I am getting used to doing again after over three years of having a full-time maid. ‘M’, our Filipino carer in Taiwan, is an angel.  We miss her every day, and ring her frequently.  And of course we rang her on Mother’s Day, because she has almost been a mother to my boys.  Not in an overbearing way, but I did bristle a little bit when my Taiwanese mother-in-law suggested several times that ‘M’ was really the true mother to my boys because she was the one who was there the most.  (MIL is not known for her tact, even accounting for cultural norms.)  It didn’t help that Little A, who was just learning to talk, called most females ‘Mummy’ and MIL frequently heard him saying that to ‘M’.

For the last three years, we celebrated Mother’s Day in Taiwan with a large, ornate and creamy cake.  Hubbie always bought them from ‘Buckoo’, my favourite cutesy bakery near where we lived.  I always felt like Hansel and Gretel entering into the temptation of its shop (which itself looked good enough to eat).  We usually waited until ‘M’ was there to share a slice of the cake with her, or else we saved some for her (although she always explained that she was dieting and could not eat.)  And hubbie always surprised us both with almost identical bunches of flowers.  Identical, for the boys ‘two mothers’.

I never begrudged ‘M’ her flowers.  She has a heart of gold, and deserved much, much more than that for the work she did in our home and the love she showed our boys.  She went above and beyond.  It was just the identical bit.  A working mother’s guilt, I think, about not being a stay-at-home parent.

This year, the flowers were for me and me alone, as were the homemade gifts.  We have been back in Canberra for over three months, and it has been surprisingly hard to adjust to parenting without a full-time maid.  Oh, I can hear the cries of pity from most hardworking, dual-role Aussie mothers!  Especially the single ones who have to do it all themselves! There are not many people who feel sorry for me.

Most people who know me understand that I am anything but a lazy slob.  I strive for a certain Martha Stewart like style and Fly Lady neatness in our home, even if the clutter of the kids toys and wall of unpacked boxes detracts from the zen-like vases of garden flowers.  I love pegging out crisp white linen on a bright blue day.  I am pernickety about hanging my clothes in the same direction in the cupboard, ensuring the kids have enough underwear, and scrubbing the bathtub with sunlight soap. And I never go to bed before having done most, if not all, of the dishes and wiping down the benchtops, and often I have already planned and prepared the meal for the next day in advance as well. Actually, I love reading books on household hints and there is a part of me that rejoices in domestic duties.

It’s just that I haven’t had to keep house before while juggling a full-time career and two active, young boys.

In Taipei, ‘M’ would cook dinner at lunchtime while Little A was asleep, and reheat and cook additional dishes and time it so that the meal was on the table as soon as Big A and hubbie bounded in the door.  She usually fed Little A first, and would play with him so that we could all eat together (this is assuming I didn’t miss dinner due to work commitments).  Then I would try to do the dishes, and she would intervene to stop me (she was remarkably quick).

The weekend was my time to ‘play’ at being a parent, thus the title of this blog — inspired from hubbie noting that my parenting was just a part-time thing.  He did a lot of the heavy lifting in our Taipei days, and on weekends I struggled to look after the kids when I didn’t really understand their cues and their preferences.  I would try too hard: I would take them out to the park, walk too far and then play too long.  Or I would try to make them read books when they were restive and keen to run, or try to get them interested in toys when they weren’t that fussed on them.  Key word here was ‘try’.

Back to Canberra and Mother’s Day.  Now I have to come home from work and cook dinner while managing one (or two) boys pulling on my apron strings and trying to climb up to the stove (while things are being stir-fried with the gas flame on high).  I have been unpacking boxes while they have been trying to ‘help’.  Finding ways to weed the overgrown backgarden while still watching them cycling around the backyard.  Sneaking out to pick herbs for a garnish before they spot me and want to put their shoes on and run outside.  It is a bit of a juggling act at times.

My biggest fault is that I try to do too much.  I have not yet settled into the flow of allowing the kids to just ‘be’, and for me to just float along with them.  I try to use a few extra seconds while they are playing nicely to tidy up, wash the dishes, put a load of washing on, start chopping food for dinner, making shopping lists, etc etc.  Sometimes it works, but mostly my overzealousness is counterproductive.

Like yesterday.  Hubbie was out, and I was putting some dishes and ‘stuff’ away while the kids were playing.  “What’s Little A doing,” I wondered, thinking that he had been remarkably well-behaved and quiet.  I found him in his room with his little fist jammed into a jar of white nappy rash.  He had been having a wonderful time painting the train table, and his jumper.  Thankfully I cottoned onto what he was doing before there was too much mess, cleaned up before he did too much damage, and then also found some extra painting on the bathroom door.

‘M’ would have been onto this in a flash.  Or more likely, she would never have let it happen because she would not have been so stupid as to have tried to do too much. Nor would she have left Little A out of her sight.

But as I reflect on Mother’s Day last week, amidst the fatigue there was a lot of joy as well.  While I feel inadequate about the state of my house and parenting most days, there is a certain sense of authenticity, of realness, and I can feel that my relationship with my boys has become more close.  This year I felt I earned my flowers even more than in previous years, and I haven’t had to share them with anyone else.  My boys know who their Mum is; I can tell by their smiles and cuddles.  No confusion this year.