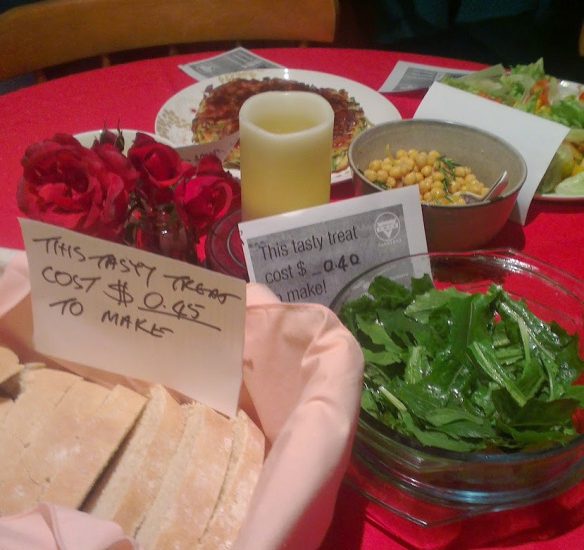 I was thrown a challenge: could you cook dinner for $5 or less? And could you share it with other people as part of a potluck dinner?

The $5 potluck dinner is in aid of YWCA Canberra‘s winter hub appeal. Participants aim to cook a meal for $5 or less, invite friends over, take photos and use the #Fiver4Food hashtag to share pictures. Canberra can be a cold and lonely place when you are struggling to make ends meet. The YWCA operates a Food Hub, a ‘pantry-like system’ that provides young people and their families with food in times of need. And according to the YWCA’s website, it is more than just food: it also provides a community with support.

Being in essence frugal, and loving to cook, I was excited about this challenge. And it happens that we are (coincidentally) having a tight month financially, with several major bills due. For us we are blessed by having good jobs and the promise of a fat tax refund soon, but I could not imagine what it would be like to have to choose between food and turning on the gas heater. Or not being able to take the kids to see the doctor.

“Making a meal for under $5 is very difficult,” one of my friends said when I invited her. And she and several others politely declined on various pretexts. Perhaps the challenge was too much for most? Undaunted, I proceeded until I had received a ‘yes’ from two couples: so we had three families contributing, spending $5 or less each, or $15 in total.

I will admit that hubby was not quite as excited about this $5 potluck idea as I was. Hospitality runs deep in Taiwanese culture. Taiwanese people usually treat friends to lavish restaurant banquets, fighting over the honour of who would pay the bill.  And if you are invited into someone’s home, they will usually over cater. While the Taiwanese expat community here in Australia is more relaxed, in Taiwan it is considered an embarrassment — a sign of lack as a host — to ask a guest to bring something. Much less something cheap.

So hubby went shopping in the afternoon and bought some potato chips as a back-up just in case.

“How much did the chips cost,” I asked?

“Well, I won’t be serving that tonight because it is not within budget.”

He looked sad, as did Big A who was had seen the packet and was looking forward to eating chippies.  Was I a mean mummy?  Possibly.  But by the end of the evening, after we had feasted like royalty on NINE dishes that cost a total of $12.99 to produce, he was no longer a skeptic.  It can be done.

This is what we ate.

I made seven dishes for a grand total of $4.49.  My neighbours brought two Japanese-themed dishes totalling $2.50, and our other friends bought a hearty meal that we ate as leftovers the next day that cost only $6.

Middle-eastern style carrot dip, made with home-made yoghurt and home-grown shallots (I saved the ends from store-bought shallots and replanted them) (25 cents). I costed in coriander, but this was gifted by a friend who was heading off to be a grey nomad.

In Australia we usually only eat the snow peas, but in Chinese cuisine the tender shoots are a delicacy.  I sourced these from my garden — one of the few things doing okay in my long-neglected vegie patch.

Dandelion salad with extra virgin olive oil and lemon dressing (40 cents).  The dandelion leaves were harvested fresh from my backyard.  This common backyard weed is a veritable superfood, with an encyclopedia of health benefits.  Yes, hubby was shocked that I served our guests weeds.  But they liked it, and ate it all up.  Especially my Japanese neighbour.

Steamed savoury egg custard (46 cents).  Hubby made this, a favourite with our kids since they were babies.  It is incredibly fluffy, and has that homely comfort-food factor that restaurant food can never replicate.

Lemon-scented bread and butter pudding ($2.23).  A classic for good reason.  I costed in half a loaf of supermarket bread, even thought it was stale bread that many people would throw away.  I could have made it more cheaply with the homemade ciabatta, but it was still too fresh. I thought about using jam, nutella or vanilla but it would stretch my budget.

My Japanese neighbour and her husband surprised us by showing that Japanese food does not just consist of high-end sushi restaurants.  And in fact, home-style Japanese food can be cheap and delicious.  When she was a student in Australia, her budget was so tight that she only spent $10 a week on food.  So she knows how to cook low-cost meals.

She produced a crunchy salad with a Japanese dressing for less than 50 cents.

Then a dish of Japanese okonomiyaki — a type of thick savoury pancake — cost only $2.00.  We all clamoured for slices.  She has a secret recipe for making this especially cost effective, which I promise to share later (I will need to do a taste test run first).

Our friend Rose baked this, which was hands down hubby’s favourite.  (Yes, he chose this dish over his wife’s cooking).  Little A loved it, too.

Curry mince casserole, a meal in itself with rice and vegetables.  Although it went over the $5 challenge, it was a big meal and more than fed our party of six adults and two children.

And then we enjoyed the meal again as leftovers the next day!

So, who wants to come over for the next $5 potluck dinner?  I still have lots of budget ideas to try out.  And in support of this #Fiver4Food campaign, I will be blogging about frugal food ideas over the next few weeks.  So stay tuned for more cheap food ideas.