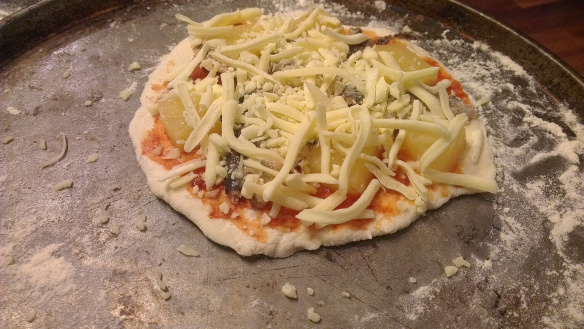 Big A is going through a stage of begging me to bake him pineapple and sardines pizza for dinner.

Pineapple and sardines?  Where did he get that idea from?

From a Disney Little Golden Book, that’s where.  Specifically, Donald Duck and the One Bear, which is a story based on Goldilocks and the Three Bears.

He loves this book.  Every night he begs me to read it to him before he goes to bed, and then he goes to sleep with it under this pillow.  At not quite five, he has memorized nearly all the words.  I stop reading from time to time to give him an opportunity tell me the tale instead.  Little A loves the book, too.  He calls it “Donald Dook”, and they both laugh at his pronunciation as if it were one great big joke.

Big A asked me, begged me, pleaded with me to make him pineapple and sardines pizza.  More than once.  This pizza combination features in the book as the supposedly weird combination that only Donald Duck and the bear that wanders into his house and eats it all likes.  It is meant to indicate a combination that is really icky.  But actually, it is not too bad.  And best of all — he likes it and actually eats it!  Mainly just the sardines, though … he is not as keen on the pineapple.

Taiwanese food often combines unusual salty/sweet flavours.  A traditional soup, which I enjoyed in a teahouse in the Maokong mountains, is made from chicken, anchovies, bitter gourd and pineapple. I really like this soup.  And so I also found myself liking the pineapple and sardines pizza, which is just as well because Big A (even when he likes something) doesn’t have a big appetite and there were plenty of leftovers for me.

Of course, you could make the other pizza flavours featured in the book: a hot pepperoni pizza for Daisy or a cold sausage pizza for Huey, Dewy and Louie.  Or else you could experiment with this.

I usually make a double quantity of pizza, and if we don’t finish the pizza that night there is then an extra one for lunches or to freeze for another dinner midweek.