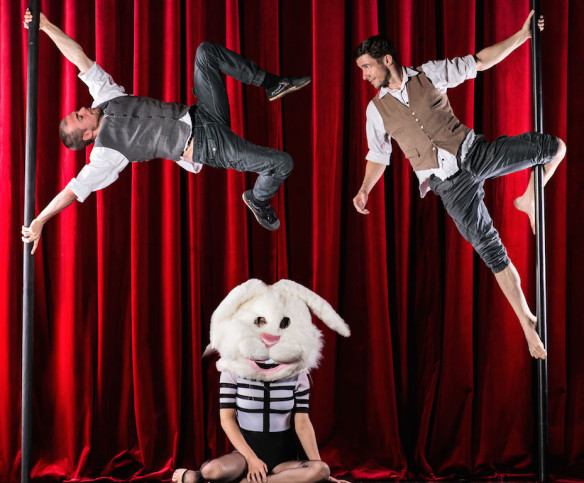 Last night I went to the Canberra Theatre Centre to see Circa Beyond.  In summary: wow.

I wasn’t sure what to expect.  I knew it was an acrobatics show.

Acrobatics.  I saw a lot of those in China and Taiwan, and while they can be a bit predictable, I like them a lot.  The standard formula seems to be flashy fluorescent costumes, prepubescent girls (or at least ones who look as small) with gigantic red lipstick faces, twenty or so porcelain bowls being juggled on a stick, impossible contortions and a finale with a human stack with some poor muscular Chinese guy at the bottom holding all the acrobats up top.  With chairs.  You can’t help but ‘oooh’ and ‘aaah’ sitting on the edge of your seat watching the dangerous performances.  But part of me often wants to give the kids a big hug: you can’t help but wonder if they have been forced into a bone-breaking regime from an early age to reach such perfection while living on a diet of water, rice and steroids.

Circa Beyond was so different.  It was adult.

For one, the performers seemed healthy and wholesome – the female performers almost voluptuous and curvy compared to the usual Chinese girlish acrobatic look.  And there was hardly any sequins or glitz in sight; it was a stylish and almost understated modern look.  Not that it was boring – far from it.

I didn’t get the rabbit head costumes, but then my sense of humour is a bit slow.

At the beginning we were asked to suspend reality, and I guess that is what I did.  There were always something happening, and it was always odd yet entrancing.  I know that the performance was technically brilliant, yet I found myself sometimes forgetting the sheer physical discipline as I relaxed into the mindfulness of the beauty of the moment.  Not that the audience did not ‘ooh’ and ‘aah’, but they laughed in equal measures as well, and were often thoughtful as they relaxed into some of the more chilled out routines.

I have heard that the first thing you learn when doing acrobatics is how to fall safely.  Which is a good thing as there was a lot of comedy that involved deliberate falling.  I hope it did not hurt as much as it looked like it did.  And those female performers were so strong – they did as much, if not more, of the heavy lifting as the male performers, while looking almost nonchalant about it.

Circa Beyond is performing at the Canberra Theatre Centre from 25 to 28 February.