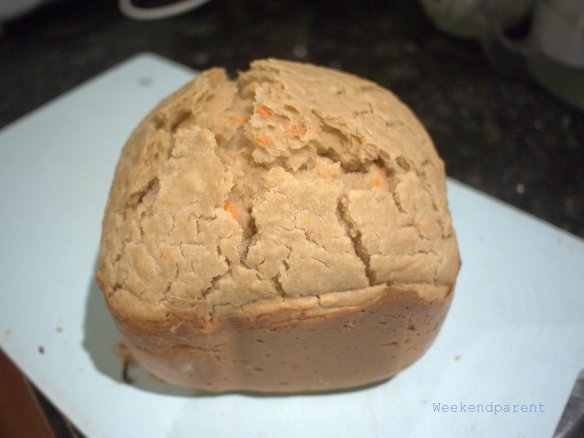 So, day one of my $2 a day challenge started well. I had my menu plan, I had started cooking.  Just one problem: I was hungry.

I thought I had it all figured. I was pretty smug, actually.  Baked a loaf of oat and carrot sourdough bread the night before. It wasn’t my best bread making effort – a bit hard and sour – but it was dense and nutritious. I had a small slice for breakfast, and cut three thick slices for lunch (which I had toasted with butter and tomato).

The ingredients for my sourdough bread were simple:

I combined in the breadmaker and cooked on basic. I think it would have worked better with a longer rise time, i.e. on the French setting.

Breakfast was porridge with sugar (no milk) made from 1/2 cup of rolled oats. It was a larger serve than I would normally have.  Afternoon tea was one small apple.

On paper this looked fine, but in reality I was starving.  Ravenous.  Hard to concentrate at work by mid-afternoon.  It didn’t help that I had a formal lunch to go to.  I didn’t eat, but sat next to people as they ate a huge plate of roast pork with crackling, gravy and apple sauce. I am not usually a roast pork fan, but it smelled soooooo good.

I had grand plans for dinner, but by the time I got the kids fed (no, I am not putting my young children on the challenge) there was little time for an elaborate dinner.  So I made myself a simple Spanish-style omelette with potato and tomato.  Tasted quite good, actually.  I estimate that the omelette cost around $0.79 to make, mainly because it used two eggs.  So happy to finally eat it.

After dinner I made a batch of soup and a caramalised onion tart for lunch.

I am finding that I am getting quite possessive of my supplies. I almost hate to use them.  But so far I have used up:

Today I will be better prepared at work.  And I guess my stomach will get used to eating less food, too.