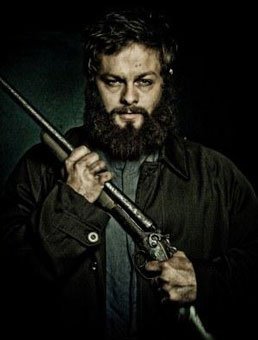 I am fascinated by bushranger legends.  There is something about Australia’s wild past: gold rush money floating around, a growing and almost lawless population, corrupt state troopers, more pubs than churches in country towns.

As far as bushrangers go, none were bigger than life than Ned Kelly, whose legend refuses to die. I remember going on a school excursion to the Old Melbourne Gaol. It had housed countless prisoners, but none were as famous as Ned Kelly.  That was what we all wanted to hear about.

I have been to Kelly country often, to visit a friend whose parents live in Benalla.  We would do daytrips to the wineries around Glenrowan, sipping leisurely on the regional shiraz and fortified wines and gaze out onto the surrounding hills and scrub and wonder what it would have been like to be a bushranger.  It all seemed like a romantic, Australian-style robin hood social reformer-cum-bushranger epic.  Poor Ned, good Irish boy campaigning for the poor battling masses.

Several years ago my Dad told me my grandmother and her family had been held up by the Kelly gang when she was young.  My great-grandfather owned property in Rutherglen – sort of on the fringes of Kelly company.  My relatives main crime apparently was being Protestant Irish; the Kelly gang were all Catholic.  I never knew Nan Fewster was Irish; born in Australia she never had an accent, never spoke of her past.  Dad said when he was young she used to like listening to Irish jigs. I was not nearly as in awe of the Kelly gang after I found out they had tried to kill my family.  Suddenly their actions did not seem so just.

Was Ned a good man?

The Queensland Theatre Company homepage production of Kelly, written by Matthew Ryan, explores this question via a fictitious scenario of Ned being confronted by his brother Dan Kelly, who comes into Ned’s prison cell as a priest in disguise.  Dan was declared dead in a fire at the Glenrowan pub after a final, fatal shoot down.  But there are legends that he escaped up to Queensland: at least four men claimed they were really Dan Kelly.  In the chaos of the post-Glenrowan siege, perhaps anything could have happened.

The probing of the morality of Ned’s life and actions is central to the play.  It is a question that a younger brother, beholden to the legendary Ned, might have pondered.  Did everyone in the gang agree with the sudden turn of events that saw minor horse thieves suddenly become the most wanted men in the colonies of Australia?  How did Ned’s letters to the newspaper about the need for social reform, of the need for better conditions for battling Irish immigrants, mesh with the cold-blooded, close range murders the Kelly gang carried out?  How did four bushrangers hiding out alone in the bush get on with each other?

Steven Rooke gave a powerful, loud and crude performance as Ned.  It was more than just the bushy beard: the man looked and sounded as I would have imaged Ned to sound.  Undefeated, egotistical, brazen, full of bravado, singing.  He filled the stage.  His presence was everywhere.  He had a louder-than-life, likeable down-and-out ruffian quality.  A modern day Ned.  It felt quiet when the play ended, like something was missing.  A subdued feeling in deference perhaps to Ned’s death.

Kevin Spink, who played Dan Kelly, was almost wimpish in comparison.  His performance underwhelmed and annoyed me for the first ten minutes or so.  His appearance went against my image of a gung-ho, hardened bushranger.

But perhaps Dan was not that.  Perhaps he was just a frightened little boy following his charismatic elder brother.  The real Dan must have hero-worshipped Ned. Yet it was Dan who, history says, brokered a deal with the police behind his brother’s back to let the hostages escape at Glenrowan.  Spink delivered a vulnerable performance that explores what might have happened had Dan’s vision of Ned soured.  His softer performance was a good foil to the exuberance and charisma of Rooke’s performance as Ned.