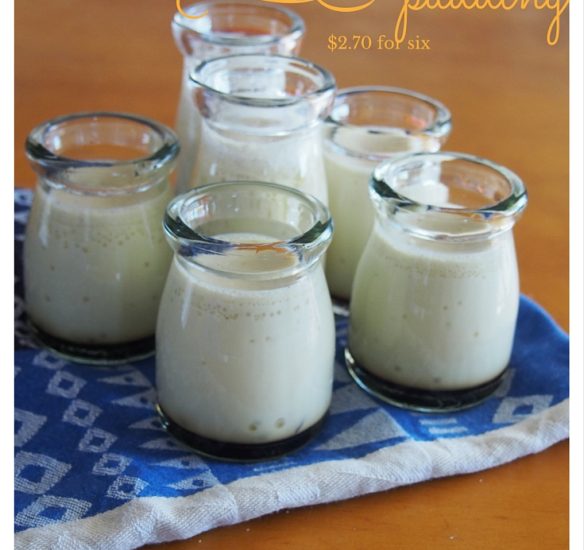 When we lived in Taiwan, my kids loved eating Taiwanese ‘pudding’. This is basically like a creme caramel that came to Taiwan circuitously via Japan.  Any self-respecting, decent bakery or patisserie (and there were a lot to choose from) had a gourmet version of this pudding.

It is a simple recipe, but it took me a while to discover how to make it. I previously blogged on my Taiwanxifu site about a version made with gelatine, which resembled the 7-Eleven/Convenience store type they were used to.  But now I have recreated an upmarket, steamed version.  I even made it in the special glass pudding jars they use in Taiwan.

I made these for my kids, and I also made them as part of a group cooking class run by Cooking Circles.  Cooking Circles is an initiative of Heidi Zajac.  Heidi spent time in Timor Leste working on a project to help improve the nutrition of East Timorese women.  Many young women were moving from the countryside to the city in search of jobs.  They didn’t want to eat traditional, peasant foods (nor did they always know how to cook them).  Instead they wanted the processed and imported foods they saw foreign aid workers eating.

Heidi developed a system of community-based cooking groups to help these young women learn how to cook, encourage them to use local ingredients and also to make friends.  She has now extended this program to Canberra, and I was excited a few weeks back to participate in one on Taiwanese food.

The challenge for me in cooking and talking about Taiwanese dishes was to define what Taiwanese cuisine actually is.  The food that is eaten in Taiwan is an amalgam of many different influences.  As a foreigner, I could impartially observe what and how people ate, and it was not always what Taiwanese thought of as ‘Taiwanese’ food.  This pudding recipe is an example: every Taiwanese child grows up eating this, yet you would be unlikely to ever find it in a Taiwanese cookbook.

My children are certainly familiar with it, and they are so excited when I make pudding. Try it and you will see why.