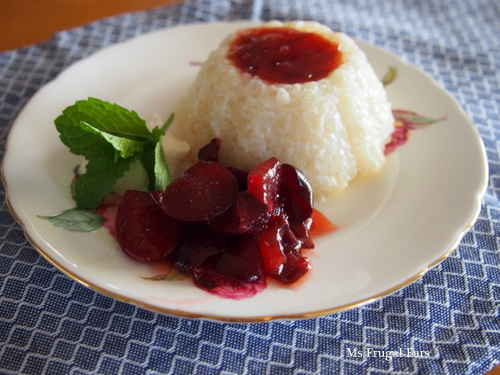 “Excuse me, do you stock sago?”

“You know, tapioca?”  I tried again.  He looked at me blankly.

“Well, where are puddings then?”  Third time lucky. Down on the bottom shelf, hidden away among jellies and instant puddings, was one solitary brand of sago.

Sago was once upon a time a nursery dessert staple. IIn Taiwan, they use larger tapioca balls to make the chewy ‘pearls’ in peal milk tea.  Sago is quite common in Asia and easy to find in most Asian grocery stores (but alas they had sold out at my local one).  I also like the Malaysian version of sago pudding – sago gula melaka – made with coconut milk and served with a palm sugar syrup.

But wait, didn’t I say plum pudding?  You know the traditional English featuring dried fruits, made with or without suet?  Made months in advance, and hung from the ceiling to age only to be boiled for hours on Christmas day?

It always kind of annoyed me that, at the height of summer, when Australian stone fruit including plums are at their best, that Australians sit down at Chrissy lunch to hoof down huge servings of super rich dried fruit drowned in brandy custard and brandy butter.  Why don’t we eat fresh fruit?

I am sorry if I am upsetting traditionalists. I have eaten my fair share of plum pudding as well, and will doubtless do it again come 25 December this year at our family gathering. I even went to great lengths to have a plum pud sent over to me when I lived in Taiwan.

Who can resist eating a solid plum pudding?  Isn’t it part of tradition?  I have fond memories of finding coins in my Christmas day plum pudding as a child, with my Nana (who baked them in) hovering and worrying about me potentially choking on them.  It was a bit of a competition to see who could get the most coins – Nana would pacify potential arguments by giving those who missed out extra. But my point is that it is such a shame not to enjoy locally grown fruit, seasonally at its best, on Christmas day.  Can’t we create new, antipodean traditions that incorporate seasonal produce?

I served this simple pudding two ways: plain with plum jam and ripe plums on the side; and layered like a parfait. I liked them both, but as it was quite sweet I would recommend also serving with quality vanilla ice-cream on the side or layering with lightly sweetened cream on top of the jam and again on top of the pudding.  And while more expensive, you could also make it a bit like a pavlova, creating one large decorative mould and topping with cream, passion fruit, banana, mango and other tropical fruits.

Try this and be surprised. It might not transplant the traditional plum pudding, but served in small decorative glasses or presented in neat moulds it will make an attactive addition to a dessert buffet assortment.  It is also much more palatable on a super hot day.  And no-one ever need know it only cost 32c per serve