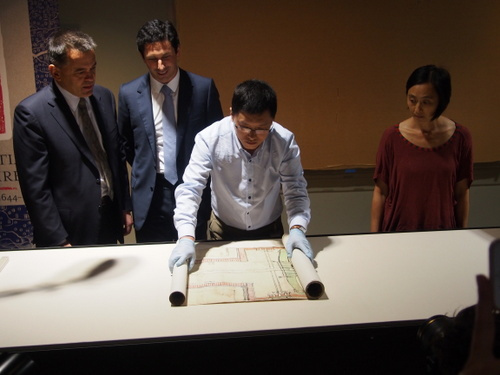 “Is it good? What is so special about it?” I have been asked this about the Celestial Empire exhibition at the National Library of Australia several times, including on ABC TV News (OK, couldn’t help bragging just a little bit).

What is so unique about it?  Well, the exhibition was three years in the making and includes several unique Chinese artefacts that have never before left China, including items from the Forbidden City.  Some of the standouts include: the Complete Map of the Everlasting Unity of the Great Qing, an early nineteenth century work that shows the impressive realm of China’s Qing Empire; the original plans for celebrations in the Forbidden City (look closely and you can see bits of paper pasted over that indicate there was a change of plans); and the spectacular golden The Scenery of the West Lake that positively gleams.

I was fortunate to attend the pre-opening of the exhibition in early December, presided over by Ryan Stokes, Chair of the National Library Council, and Chris Bourke MLA, who claims distant Chinese heritage.  The exhibition space was just being set up, and NLC staff were nervously guarding their treasures. You could almost hear a pin drop as a gloved specialist from the NLC carefully unveilled a scroll showing the length of Beijing’s Forbidden City.

Ryan Stokes (as in son of billionaire Kerry Stokes – couldn’t help namedropping) spoke earnestly about the visual nature of the exhibition, and how it showed the significant connections that had come from Australia’s engagement with China.  Nor was his enthusiasm feigned; over a morning tea with dumplings from The Bookplate cafe, NLA staff told me of Stokes’ strong interest in the exhibition as it was being put together.

At the pre-opening I was allowed around the gallery still in preparation (photos are not allowed in the exhibition).  Not much had been hung up, but I was awed by The Scenery of the West Lake piece that I mentioned earlier – it is quite dramatic.  Based on the beautiful Xihu or West Lake in Hangzhou, it is painted on sheepskin and is gold and shiny.  Very shiny.  Now that it is behind glass it has lost its sheen a little bit, but it is still spectacular.

I ventured into a back corner and was drawn to some colourful, small and catching artworks: pith paintings.  These were produced in Guangzhou on the form of paper cut from the trunk of  plant as curios for visiting Westerners to take home.  Western visitors in the Qing Dynasty had a morbid fascination with cruel and unusual forms of punishment in China, and these are reflected in the pith paintings.  Does that man really have a chain around his neck?  Yes, look closely and he does.  At the time these paintings would not have been considered high art, but they are significant because there are not many of them – especially not in China.  They come from the NLA’s own collection.

These are not the only works from the NLA’s collection.  The NLA has the largest collection of Asian materials in Australia , and half of the exhibition is sourced from its own collection. It has been collecting Chinese works for fifty years.  Larger items in the exhibiton have come from the NLC, but several rare and significant items held by the NLA appear in this exhibition side by side with works from the NLC.  For example, the NLC has preprinted works from the NLA’s collection on the  Taiping Rebellions as little from that turbulent time has survived.  (Note: The history of the Taiping – Heavenly Kingdom – is fascinating – 20 million died in a rebellion led by a scholarly dropout who believed he was the little brother of Jesus Christ.)  The NLA has also acquired some unique pieces that were collected by Christian missonaries, including Qing Dynasty texts on religion and health practices and works written by other Western visitors to China.

I was fortunate to chat with curator Nathan Woolley from the Australian National University about his views on the exhibition.  Nathan has spent over a year on secondment to the NLA putting the exhibition together.  So I was curious to discover that his favourite piece is an illustrated collection of poetry.  The poetry is attributed to Qu Yuan ofthe third or fourth century BC, notably the work Encountering Sorrow.  These poems were reprinted with new illustrations around 1645, just as Qing forces were overthrowing the Ming.  The bookis believed to demonstrate the illustrator’s lament for the fall of the Ming Dynasty.  Put in modern terms, the reprinting was a way of carrying a not too subtle message via literature that some Chinese were not happy to have been subjugated by their new Manchu rulers.

Woolley also deemed significant works the NLA had acquired from missionary societies, including those that showed what foreigners thought of China.  The exhibition also included early works about China from Korea and Japan.  I liked the book An Embassy from the East-India Company of the United Provinces to the Grant Tartar Cham Emperour of China … Wherein the Cities, Towns, Villages, Ports, Rivers, &c. in their Passages from Canton to Peking are Ingeniously Described by Mr. John Nieuhoff (printed by John Macock for the author, 1669).

Woolley said that because of the strong cooperation with the NLC, he was given a great deal of help in selecting material.  “They took me for a tour through the library and showed me many treasures, including rare printing from the Song Dynasty.”  But Woolley’s challenge was to find pieces that would resonate with an Australian audience, so in the end he decided to focus on life in the Qing Dynasty.

So, what did I like best?  Well I loved the golden The Scenery of the West Lake , some of the Daoist and Buddhist texts, the gaudy pith paintings and the Taiping Rebellion works. I also really liked the plans for decking out the Forbidden City for celebrations – it could almost imagine swanning around as part of the imperial party (what would I have been? a princess or concubine?) at one of those events.  I also liked the works from Wild Swan on the Snow: An Illustrated Record of my Pre-Ordained Life, Lincing 1847.  These were drawings by an official who was sacked after a dyke on the Yellow River collapsed (sounds awfully contemporary).  He went on to produce a work detailing 200 episodes of his early family life, travels etc.

As I wandered around the exhibition, I couldn’t help but notice the number of Chinese parents and their children.  The parents were speaking in Chinese, explaining the works, with their kids mostly answering in English.  This exhibition is, I believe, an important way for Chinese-Australian families to communicate something about Chinese heritage to their children.  And yes, most of the kids looked kind of bored but …

Upstairs is a family room with kids activities. I haven’t been there yet but several people with rowdy kids have told me that it is heaps of fun.  Really cool and one of the best things to do on a hot summer day.  Kids can do drawings, make scales to put on a dragon, and there are even FREE movies such as Disney’s Mulan, Kungfu Panda and The Spy Next Door..  On 21 January my friend and talented storyteller Holly Bidwell from Once Upon a Rhyme will perform children stories at the NLA ($2 per child).

For the adults there are some fascinating talks and VIP sessions, including Benjamin and Michelle Law (from the SBS comedy The Family Law) on 23 January.  The full program of events is available online.

The exhibition itself is free, but it is popular so it is best to book a ticket in advance.  There is a modest cost for some of the activities.