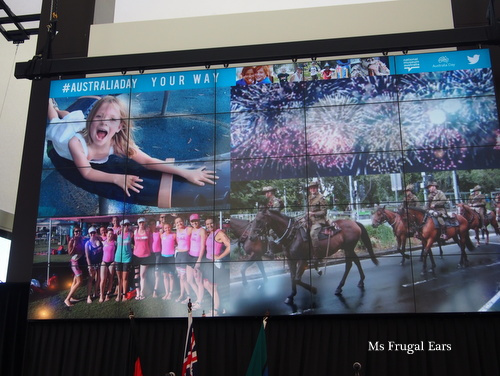 This time next week, what will you be doing?  Will you be having an Australia Day BBQ?  A few beers?  Having a picnic?  Down by the beach?  Or celebrating overseas?  Whatever you do, take a picture and share it own Twitter and other social media accounts and use the hashtag #AustraliaDay.

That’s the full word #AustraliaDay, not #Ozday or #Straya or anything else.

This morning I went to the official launch of the #AustraliaDay your way 2016 campaign at the National Museum of Australia.  It was a relatively sedate event, building up to the patriotic fever of the big day itself next week.

I am a bit of the patriotic side.  Well, okay a lot. I get choked up at tears when attending citizenship ceremonies (yes I have been to several and I find them all so meaningful).   I am awed by the talent and commitment on show in the names put forward for the Australia Day awards.  And I love Australia Day.  But until recently, I hadn’t like the kind of drunk and act stupid to show you are an Aussie kind of image that seemed to be expected from the national day ritual.

The #AustraliaDay your way campaign, I am learning, is projecting quite a different image.  An image of a diverse, multicultural, tolerant society that values freedom and fosters inclusiveness and encourages individual expression.  And its not the organisers who are projecting this image – it comes from Australians themselves.

According to NMA Director Matt Trinker, there were around 130,000 #AustraliaDay images in 2015.  Organisers are hoping to encourage even more this year.  Some of the photo combinations on show during the campaign opening were impressive.  Yes, a lot of BBQs and perhaps some alcoholic consumption, but there is a also an endearing array of photos of diverse Australians of all works of life.

I was surprised that Twitter are so involved in Australia Day.  Perhaps I ought not to be.  According to Twitter Australia’s Public Affairs spokeswoman Julie, Twitter is committed to fostering racial equality and diversity.  And on #AustraliaDay, they are a useful source of comment on all things Australian – for instance, do you put your snag on a piece of bread horizontally or vertically.

Twitter have also released a special new emoji just in time for #AustraliaDay.  If you type #AustraliaDay on Twitter the emoji will appear.  Cool, huh?

This cute koala doesn’t have a name yet.  What do you think he or she should be called?  There will be a Twitter campaign to find a name – the idea is to let the people of Australia decide.

The National Australia Day Council is, as you might expect, behind the program.  Several of its Australia Day Ambassadors spoke at the launch, including four who travelled to Canberra for the event.

Perhaps the best known is former marathon runner and Commonwealth Games Gold Medalist Steve Moneghetti.  He is surprisingly down to earth.  He shared about how his Australia Day usually involves a BBQ: but this year he is travelling to Castlemaine.  What does Australia mean to him? “There is this lake near home, it is maybe not so big, only about 6km,” he said. “But one time I had just come back from visiting Asia, and suddenly this lake it seemed so huge. I mean, in Asia you have this feeling of being so cramped.  And suddenly, when I looked at the lake, it was so beautiful.  Really Australia is such a beautiful country.”

As an aspiring writer, I was especially interested in what McLeod’s daughter creator and novelist Posie Graeme-Evans had to say about being Australian.  She talked about how being Australian gave her the freedom to sit on a hill in Tasmania and write books.  Easy to say, but freedom of speech is not a feature in all countries of the world: only recently five book publishers have gone missing in Hong Kong.  “Australia,” she said “is warm-hearted and full of kind people.  Imagine, as has happened to me, being stuck on a road in a broken down car and suddenly this truck comes up and this big guy with tattoos gets out.  Are you right, love, he says as he offers to help.”  Well, I can’t say I have had that experience but definitely experienced my share of #RandomActsofKindness.

New South Wales’s ambassador is fashion stylist Donny Gallela.  He talked about how, growing up in Woollongong, it seemed inconceivable that as a boy from the ‘Gong that he could get into fashion.  Yet he has.  “Australia is a place that allows you to achieve your dreams,” he said.

Northern Terroritory Ambassador Amy Hetherington will be journeying to a remote community in Arneham Land to celebrate Australia Day. “I don’t know what I will be doing, but they asked if I was scared of cane toads,” she asked.  Hmmm, I think that being an Australia Day Ambassador might require particular skillsets.

Nor is Canberra forgotten.  ACT’s Ambasador and ACT Australian of the Year 2016 is Nipuni Wijewickrema (aka Nip), who started a florist business so that her sister – who has Downs Syndrome – could have a job.  She talked rather humbly about how she doesn’t feel like she is on the same scale as other awardees who will be on the dias on Australia Day.  But I think, from hearing her speak, that she will do ACT proud.

Finally, we had a special performance by Reece Mastin, who will be using his 270,000+ Twitter fan base to promote #AustraliaDay.  He promised to look at every tweet – that could be rather a lot so I wonder if he will follow through.  His new song ‘Freedom’ celebrating Australia day is bound to be a hit.  He explained that he was born in England and has lived in Australia for ten years.  He doubted he would have found the same musical success in the UK: Australia with its pub band scene allowed him the creative freedom to become who is is today.

So what do you think?  What does Australia Day mean to you?  And how will you be celebrating #AustraliaDay your way?