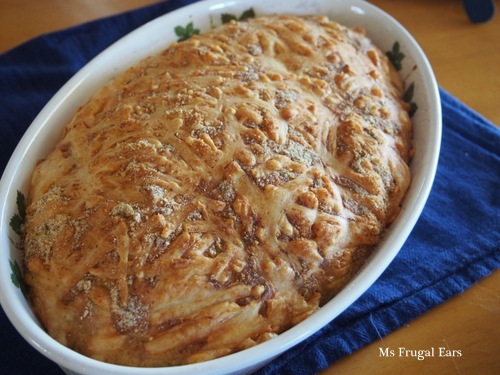 Suddenly it is late summer – almost autumn! –  and I have gone from being delighted with the sight of the first bright orange zucchini flowers to feeling slightly overwhelmed with the abundance. I didn’t have much luck with my zucchini plant this year (although I have had partial success), but I have still been gifted several.  What to do?

The quintessential Aussie classic for leftover zucchinis is the zucchini slice.  Most households have a recipe.  It turns up for picnics and barbecue get togethers from late summer onwards.  I have no idea where the original recipe came from (Women’s Weekly?) I like it very much, but find it a bit heavy for my taste.  And because it uses a lot of bacon, also a bit expensive.

So I tweaked it a bit, to make it more frugal, lighter and just a bit more contemporary.  The result?  Yum. When it is first out of the oven it puffs up like a souffle. I wasn’t expecting that, and it was such a nice discovery.  It doesn’t last and deflates after a few minutes, but cuts easily if you are serving as a slice the next day.

I took this to a food bloggers gathering a while back. I felt a bit insecure bringing such a frugal, simple offering to a meet up with some of the best food bloggers in Canberra.  But this dish stood its own amongst the offerings.  Make it and be proud to share it at your next pot luck gathering.