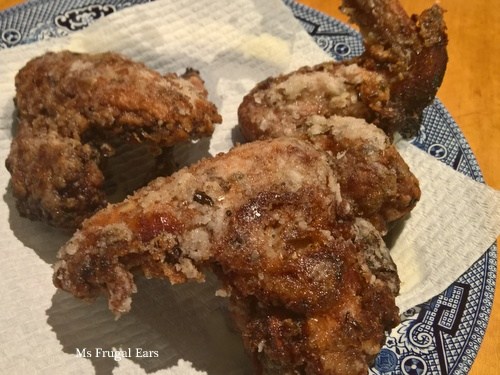 When people tell me about their secret, frugal recipe I take note.  And so it was that a university student with a passion for all things Chinese shared with me her favourite chicken wings recipe.

This is how she tells it:

This recipe was born of extreme student scabbiness and collaborations between a bogan white girl and my Chinese friends.

I definitely don’t consider her a bogan white girl.  But she is definitely a good cook and has a passion for food.  And she speaks fluent Chinese, is intelligent and articulate and has a great future ahead of her. If she ever opens a restaurant I will be there.

Oh and just because this recipe is cheap doesn’t mean that it isn’t good.  I tried this thinking I would have a small taste to be polite – I don’t really like fried things and I don’t go that weak at the knees for chicken wings.  I liked the combination of spices and I thought there would be someone out there that likes chicken wings who would really appreciate this.  But OMG these are sooooo good. I had two whole ones and found myself gnawing at them for the last remains of chicken.  The third one I polished off the next day even though I was supposed to be dieting.

Chicken wings are ridiculously cheap in Australia – I bought 2kg from ALDI for $6.50.  That’s only $3.25 a kilo!  I used to cook chicken wings I lot when I home-hosted Chinese students.  Chicken wings are expensive in China, so they are considered a bit of a luxury. My students used to beg me to cook them.

Over the next few weeks expect to see a few more recipes using chicken wings.  That’s because 2kg is rather a lot to eat for a small family!  Luckily I have discovered that cooked with my new methods (including this star recipe) I rather like chicken wings.  A lot, actually.

1)Toast the sichuan pepper over heat until fragrant. Grind in a mortar and pestle until it resembles fine powder, then set aside.

2) Dice garlic and the white part of the spring onions, then grind to a fine paste in a mortar and pestle.

4) Stir ingredients together to create the marinade. Add the chicken pieces and marinate for at least a few hours while covered (best to do it in the fridge over night)

5) Toss the marinated chicken in the potato starch or plain flour to seal the coating and deep fry. When the coating is golden brown, remove from the oil, place on kitchen paper and then deep fry again for extra crispiness

6) In a small amount of peanut oil, stir fry the diced dried chillies.  Serve the chicken with dried chilli pieces. If you don’t want too much spice, you can omit this step.

January is a great time for setting goals. But th