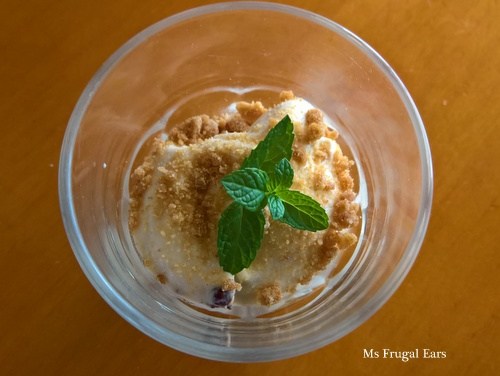 Mr Red Sports Car came over last Sunday night for a casual meal.  The Chinese dishes I planned to cook were all sorted.  But what to have for dessert?

I made several vodka-infused blackberry berry tiramasus.  I almost wasn’t going to blog about this. If you bought the ingredients from scratch, it probably wouldn’t fall within the $5 guidelines I set myself. Nor is my version as fancy as many shop bought desserts, nor nearly as pretty.  (I searched, and there are heaps of much more visually stunning berry tiramasu recipes out there.)

But this recipe pays testimony to using up what I had in the fridge, of improvising and making do.  A lot of my meals are like that: instead of getting in my car and racing off to the shops when I don’t have one exact ingredient, I improvise with what I have.  And sometimes, as in this case, I end up with a creative new recipe.

My mum is a great improviser.  A fashion designer with a creative cooking flair, she trialed gourmet combinations long before it was fashionable to do so. And she taught me to do improvise and make do.  OK, so the time I made bread rolls improvising with not enough yeast  (that had also expired) didn’t quite work.  But I learnt something about how yeast works (or not), and as a ten year old that was a pretty amazing experience (even if I was ridiculed by family members at the time).

On the weekend I opened the fridge and looked in it and there wasn’t much to be seen. But I had nearly a pint of cream I wanted to use up. “Oh, maybe I can make bread and butter pudding!” I thought.  But I was out of bread.  Then I spied a tub of cream cheese hidden in the back of the fridge.  “Oh, tiramasu” I thought.  OK, it is not as flash as mascarpone cheese but it is still nice.  Then I worried that I didn’t have enough savoiardi biscuits (I only had six, which weren’t the newest or freshest).

Then I realised the biscuits fit exactly into a small  baking dish I had.  That sounded like it was meant to be.  But the dish wasn’t deep enough for a large tiramasu dessert. “I know, I will make them in little glasses,” I thought.  They were not large serves, but who can really eat a large serving of tiramasu? I decided to make both a small square slab and glasses.

The next dilemma was that I didn’t have any coffee liqueur. I thought about buying some.  “Hang on a second, I’m sure you have something else on hand,” I reasoned with myself.  Then it hit me that I had a jar of foraged blackberries sitting in vodka.  Voila!  I added them to the creamy mixture along with a bit of the resulting blackberry liqueur alcohol.  And I used some opened white wine in the fridge for dunking the biscuits.

I was planning to decorate the tiramasu with chocolate.  But then I noticed that the leftover sugar and biscuit crumbs had an interesting texture, so I added those as well.  And at the back of the fridge there was a jar with brown sugar streusal mixture, ready for the next time I planned to make a Herman the German cake.  I sprinkled that on top of the tiramasu, too. I think it made a nicer contrast than the chocolate in any case.

So all up I made four small glasses and a next day serving of tiramasu, using what was on hand without having to run to the shops.  It used up ingredients that might otherwise have gone to waste, and saved me probably at least an hour of my time in shopping, which I was able to use for writing instead.  The power of improvisation!

I doubt you have foraged blackberries that have been preserved in vodka for seven months on hand.  But you can easily adjust this recipe by using blackberry liqueur and fresh or frozen blackberries instead. Or you could use other berries and other liqueurs. Or if you don’t have cream cheese, you can strain yoghurt to make yoghurt cheese.  I am sure you can improvise.