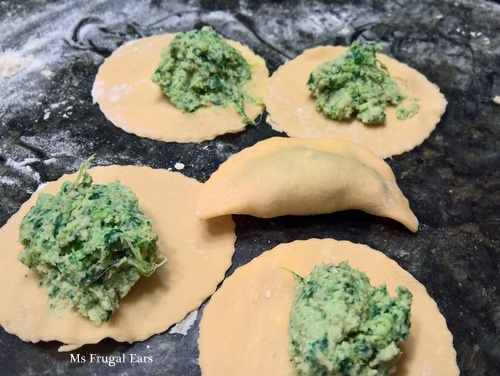 As I was making this recipe, I was multi-tasking and chatting with my mum on the phone.  When I told her what I was making, she was appalled.  “Don’t eat that,” she said.  “You will make yourself sick!”.

The soft rain that is falling this week in Canberra is giving rise to lots of greenery.  Most keen gardeners will start to worry about needing to poison the weeds or mow them down.

Not me: I look on the weeds as a food source.  I also believe that, based on my rudimentary and not always practiced knowledge of macrobiotic food, that late winter and early spring is the perfect time to eat these antioxidant rich  weeds as they are detoxifying after a winter of eating heavier foods.

Actually I have eaten these Scottish thistles before and had no bad side effects (my Mum was still not convinced). In fact, thistles are quite the super food.  They assist weight loss, help purify the liver and gallbladder, decrease cholesterol and can help to prevent cancer.  Among other things.  They are also free, and in most gardens, are considered a pest and are removed using strong chemicals that can be harmful to the environment.  Why not eat them instead?

This recipe makes about 60 large agnolotti.  Spinach and ricotta agnolotti or ravioli are my go-to food when I am feeling like treating myself to something nice.  The only thing is most manufactured versions have much more ricotta than spinach in them, I guess because commercially grown spinach is expensive.  Commercially grown spinach also contains a lot of pesticides. Not so the thistle – it is so prickly that it is difficult for most pests to eat it.

I had a profusion of eggs at home so I made the pasta dough for these agnolotti.  Actually the eggs were gifted so the overall cost of making the dish for me was in reality even lower.In the past I have been lazy and used gow gee wrappers.  Do whatever works for you.  You can also reduce the costs by making your own ricotta cheese. I didn’t on this occasion as making the dough was already a bit of a production.  But it would reduce the overall cost to only $2.20 if you did so.  Still at only 5c each for silky smooth large homemade agnolotti, it is already pretty good value.  (Note: I found I had too much pasta dough for mixture, so I made some pasta for the kids for dinner.  So this $2.90 price includes 60 agnolotti, plus dinner for two kidlets and leftover for my lunch the next day.)

Total:  $2.90 makes around 60 medium to large agnolotti (i.e. at 5c each). An average meal would consist of around 8 agnolotti at 40c (plus extra for parmesan cheese, butter, sage and/or olive oil to top).