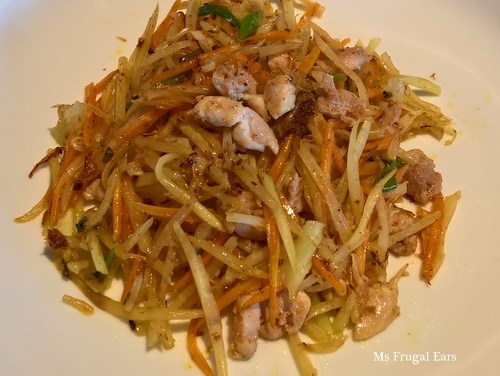 What is it like to live on only $50 a week for grocery items?  I thought I would keep a diary for a week to show how it could be done.

Someone left a comment my blog asked for my menu plan and grocery shopping list. One of the secrets to living on a tight budget is menu planning. Menu planning is magic in reducing waste, and making you think about what you need (and don’t need).  I always write a list of meals each week.  But …. I have trouble sticking to it, mainly because I find that I am a bit too creative for my own good. The day will come around for a certain meal, and I will change my mind.

In an effort to be accountable, I thought I would diarize my groceries for the week. If there is interest, I will diarize again. (Please let me know, and also point out any recipes I may have overlooked.)  I am a little concerned about doing this.  What if my readers  think I am a bad mum who doesn’t feed her kids enough? Or that I am toooo frugal? Or that we are not healthy enough (we had a bit of an unusual amount of takeaway food this week – this goes into my eating out budget, not the grocery budget btw, but I don’t do it to cheap my system)?  Or that I am splurging on things like expensive dinners instead of my daily grocery needs (well, I did have a birthday).  But warts and all, here is what I ate, and what I did.

My $50 budget usually runs from Sunday to Sunday, but this week I have changed it a bit to run from Friday to Sunday.

Arrive back from road trip to King Valley.  Instead of stopping en route for dinner (not so pleasant in the rain), or going out locally to somewhere in Canberra (exhausting after along drive), I defrosted some frozen bolognaise sauce.  We added some of the red wine we bought in King Valley, some anchovies (Mr Red Sports Car’s secret ingredient), and I threw in to soak some chunks of  grana padano that have gone hard.  I served it over some leftover homemade fettuccine I made a week before (which I had dried).  We dined on an entree of some stinky blue vein cheese I picked up at Yackandandah, served with a 2008 Riesling from Darling Estate.

I have toasted homemade soy and linseed bread for breakfast (from the freezer) with vegemite.  For lunch I have some leftover bolognaise sauce with wholemeal pasta. I mix in a handful of rocket leaves from my garden.

I snack on cheese on rice crackers with homemade chutney mid morning.

I use up the leftover wholemeal penne for dinner with fried onions, homemade black olives, rocket from the garden and lots of Parmesan cheese (ordinary packet stuff, not the really good stuff).

Used up cooked brown rice and quinoa.  Fried it up with mallow (an edible weed) with one potato, kim chi and an egg for breakfast.  I ate the leftovers for lunch.

I make a batch of strawberry Easi-yo from a sachet lurking in the back of my cupboard that was regifted to me.

I picked up the boys from their Dad mid morning, and we went to church for a bit.  But they were bored.  The boys insisted on Kingsley’s takeaway chips and one piece of chicken as a treat. Not having seen them in a week I cave in.  I was so happy to see them was is hard to refuse them treats:)

I walked past my local butchers with the kids and noticed freerange chicken drumsticks and beef brisket on special.  The beef is labelled as being for puppies, but I love it in Taipei beef noodle soup so buy some to freeze and use later.  Forgot straws and jelly, which I need to make worms for a camp we are going on next week. Head in to ALDI and buy two packets of jelly.

We went home and I made the boys a banana yoghurt smoothie for lunch using up frozen bananas from the freezer.  So yum. Little A has two glasses, but Big A doesn’t like it. I make Big A a toasted cheese sandwich instead.

In the afternoon I have a cup of tea and make a cup of watered down tea with milk and sugar for my boys – our weekend ritual:)  I sat down and did up a food plan and realised that I am being taken out to dinner on Thursday for my birthday, and then we are away Friday and Saturday nights.  So this week really all I needed to cook for is Monday, Tuesday, Wednesday and to have something in the freezer for Sunday.

I did a bit of weeding in the afternoon and prepared the beds for some zucchini seeds.  The tomatoes I planted last week are going well with all the rain.  Before dinner I pick up a dozen chicken and duck eggs for free from a lovely family on my local Buy Nothing Project Facebook group.  Also pick up a dozen small Mandarins given away by another family. I don’t have to give anything in return, but I deliver small bunches of parsley tied in brown string.

Dinner is deep fried salt and pepper tofu, fried free-range egg on rice, homemade chicken and carrot soup, plus dandelion greens from the garden.  Little A said he was still hungry so I made him a soldier egg with toast.

I made another batch of yoghurt – this time Greek – before we went to bed.

I made the boys a weak home juiced apple juice, then I had a glass of apple, carrot and cleaver juice.  Cleaver is a weed that can be juiced like wheat grass and helps to detox the system.

I made a dozen morning glory style muffins from the juicing leftovers. I removed most of the greenery, but a bit remains. In any case it is only for my own consumption to I don’t need to explain to anyone else.

Went to Bunnings and treated my boys to a sausage sizzle. I am not hungry and am dieting so don’t have any.  When I come home I cook up some of the thistle and ricotta agnolotti from the freezer, and top with some oil from a jar of homemade sundried tomatoes.  I indulge in half a glass of  leftover Darling Estate Riesling from our trip to the King Valley.

Peeled some fat skinned lemons I was gifted at the King Valley and put them into vodka as the start of Limoncello.

Back at work.  Big A at a school holiday program.  Made Big A a lunchbox with a banana muffin and vegemite sandwich.

I packed my lunchbox with a banana and 100ml of Easi-yo strawberry yoghurt.

In the evening I was caught in a severe thunderstorm complete with hail.  So I went to the underground carpark in Coles to shelter; the boys’ Dad picked them up and kept them at his place until the weather was better.  While at Coles, I bought supplies for church camp where I did a session on cooking for children (not covered in my grocery budget). I was hungry and contemplated buying something to eat – have you ever tried to find a healthy, to eat snack in a supermarket?  I nearly bought dip and crackers, then figured I wasn’t that hungry and didn’t really need it. I also walked past a bakery and didn’t buy anything.  Instead I ate a few quiches that I had picked up for free from the cafe at work when it shut. (My bestie and I at work go down every day to check for leftovers – it is our opportunity to chat about the day.)

Picked up the kids an hour late.  Went home and we had some Chinese leftovers.

After they had eaten I fried up remaining pork mince, wood ear fungus and tofu to make a stir-fry for lunches. I served this with a bit of kim chi on the side.

I also made sugar syrup and added it to the Limoncello.  Oh my, the colour in the Limoncello was already looking gorgeous and very fragrant.  (Contrary to how this post might read, I actually don’t drink a lot of alcohol. Just happened that I had some opened bottles from King Valley).

I purchased 600ml of skim milk from the cafe to make tea for a grant total of $1.80. I regretted not remembering to fill up a bottle from milk I bought at ALDI.

The boys were hungry and I was running a bit late, so I caved in and bought them Laughing Cow cheese triangles – a treat at $4.65 when something similar is $1.99 at ALDI.   I was feeling especially frazzled and not in the mood for mess and cooking.  I gave the boys dinner of freezer defrosted mac and cheese.  I ate some thistle and ricotta agnolotti.  Then I made cupcakes for Big A’s birthday to take to his holiday daycare program.

Birthday morning for Big A,so I fried him a pancakes.  He liked the cupcakes I made for him for his school holiday program.

In the evening the kids were with their Dad for another birthday celebration for Big A and Mr Red Sports Car took me to a swanky Italian restaurant for my birthday.  (Hey, I said I wanted ice-cream so he choose an expensive restaurant nearby to my favourite ice-creamery).  My main meal alone cost more than my entire weekly food budget for this week.  And the nice Italian wine cost more than three times that.  It was, actually, very nice.  Finished off the meal by wandering down to enjoy a fennel and dark chocolate ice-cream cone at Mr Frugii.

Partook in morning tea at work (we have a fortnightly roster), after which I defrosted a sandwich I had in the work freezer and had it with a 30c serve of La Zuppa soup I purchased at The Reject Shop a few weeks ago (while still on the challenge).

Picked up the boys then picked up our joint birthday cake.  It was huge!  We headed out for a church camp around 40 minutes outside of Canberra.  As it was a bit of a rush we had McDonalds for dinner (a very occasional treat). They really only eat chips so I ordered two packets of chips and one burger between them.  There was fruit and fruit cake at the church camp, so no-one went hungry.

All food provided at church camp.