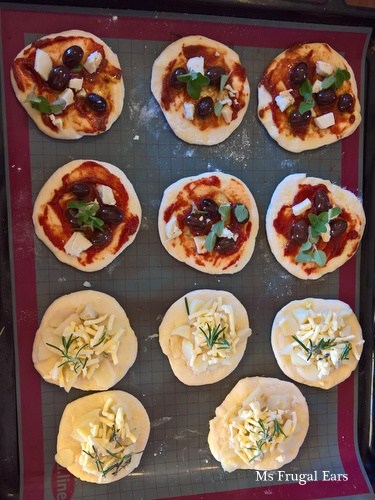 My second diary of my $50/week challenge. And where did the week go?  This week I spent $38.45, and on this I entertained Mr Red Sports Car for dinner and cooked food for Big A’s seventh birthday party. I am pretty sure no-one felt deprived. It can be done!

Returned from camp after lunch.  The boys had dinner with their Dad, and I had dinner with Mr Red Sports Car at his place – we cooked steak with asparagus, prawns and potato mash.  He wanted to throw out an orange, and I insisted on taking it home instead.  Then he wanted to throw out a kilo of red Desiree potatoes because one had gone seriously bad. We had a mild argument over that:)  I ended up taking all the potatoes and two oranges home with me.  And a lovely bunch of home-picked flowers he had prepared for me for my birthday.  We joked that he should take up flower arranging.

I did a mad dash to ALDI just as it shut. Spend $27.70.  I will need to spend more this week as Big A has his birthday party on Saturday and I have a lot of things to cook.

I packed a hamburger bun with Vegemite for Big A, with a cheese stick, a banana muffin and a banana.

Big A is sick when I pick him up from his Dad’s place, complaining of a headache. He threw up a bit in the front garden. I fed Little A some frozen dumplings and cooked up some thistle and ravioli for me.

I then fried up brown rice and quinoa with kim chi, marrow from the garden and an egg for lunch the next day.

Just as we are going to bed, Big A announced he was now hungry so I cooked up the remaining dumplings for him for dinner.

Before going to sleep I put in ingredients for soy and linseed bread in the breadmaker and set it for breakfast.

Breakfast of soy and linseed bread for Little A and I.  Big A had Weetbix, and his ‘usual’ for lunch.

I have a migraine and feel miserable. I treat myself to a cannoli at the cafe at work for a whooping $3.50.  I have been craving one since missing out at King Valley.  I remind myself to make some at home laced with the limoncello liqueur I am making.

For dinner I cooked sausages for the boys. I serve them in hamburger rolls served to look like monsters with cheese cut for teeth and the sausage hanging out like a tongue. I am not that hungry so I have a bit of sausage with some soy and linseed bread and avocado.

Used some leftover sausages to make a red lentil and potato bake in the slow cooker.

Home sick with a migraine.  Soy and linseed bread with vegemite for breakfast.  Then, after I am feeling well enough to eat, some high fibre pasta with avocado, yoghurt and lemon sauce.

Cleaned out the fridge.  Threw out old porridge with egg, coca cola chicken wings, hardboiled eggs, and some vegetables that had gone mouldy.  I am not buying much but still buying more than I need.

Leftovers for dinner.  Actually can’t remember what we had but most probably Chinese.

The boys are with their dad. I started to cook for the birthday party, but first Mr Red Sports Car came over for dinner so I cooked pizza.  The first pizza is topped with creamed cheese (made from homemade yoghurt) and smoked salmon (bought on special and frozen).

We washed the pizza down with a bottle of Dal Zotto Prosecco bought recently at King Valley, and snacked on Milawa Mt Buffalo blue vein cheese we also bought while away.  And we finished with a bit of Haigh’s dark chocolate with orange I brought back from a recent work trip to Adelaide, and a small glass of homemade limoncello.

Birthday party time!  I start the day by voting in the ACT Elections, and supporting my kids local school with an egg and bacon role.  Then into cooking.  I made:

I almost dashed to the shops to buy strawberries, but one of the parents arrived with two plates of the cutest homemade strawberry beetles ever.

The kids Dad bought cheesals and Kingsley’s chips to eat (at Big A’s request), and also organised the cake.

None of us were hungry for dinner, and we grazed for leftovers.

The ‘easy’ part of the challenge is over.  I will have the kids solo for the next three weeks, and my Dad will also visit for five days in the middle.  So I will really be reaching for things in the back of the cupboard.  Wish me luck!