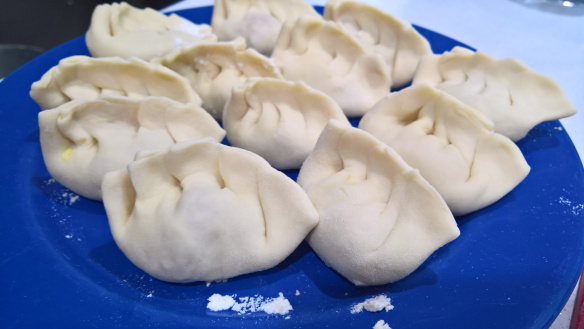 Although I no longer live in Taiwan, celebrating the Chinese New Year is still important to me.  This year I have just moved house and am in the process of changing jobs (well, going on secondment at any rate), and my kids are about to start a new school.  So you could say that the year of the Rooster is bringing a lot of change for me.

Once upon a time families – especially in northern China – would celebrate Chinese New Year’s Eve by sitting together and making dumplings and watching a variety show on CCTV called chun wan (春晚). These dumplings are called jiaozi (饺子) in northern China, and shuijiao（水饺) in Taiwan, and while there are a few differences including how they are folded and pleated they are essentially the same. Of course families would make them from scratch, rolling the dough into neat circles.  The idea is to make the finished product look like how gold used to be shaped in China (kind of like a cross between a boat and a hat).  The symbolism is a wish for gold and prosperity in the year ahead.  The circles also symbolise family unity.

In Taiwan things are a lot different. Many families don’t cook any more, and are more likely to go and purchase a profusion of special Chinese New Year dishes.  Buddha Jump Over a Wall, prawns cooked in rice wine, whole steamed fish, sticky niangao dessert, thin slices of goose served with ginger or cumquat sauce, special pickled vegetables – it is some feast.  My ex husband used to say that people in Taiwan don’t need to eat those poor foods like dumplings anymore.  And indeed, I suspect the tradition is changing also in China as its middle class swells.

But I like traditional.  So last night, despite my own kitchen being in disarray from the move, I invited myself over to Mr Red Sports Car’s place and made him dumplings.  “They sure take a long time,” he said.  Yes, they do.  But the thing is, homemade dumplings are made with love.  Mine might not be perfect, nor might they be expensive, but they communicate a hope for the new year and for blessings and prosperity and harmony.

The addition of butter might sound weird, but this was suggested to me by my Taiwanese friend Bigo.  The best dumplings are made with pork mince that has a decent fat content, with a little bit of oil added to make it moist. Most mince in Australia is actually quite lean, and the butter helps make the meat juicier.

Wishing all of my readers joy and abundance in the Year of the Rooster.

3-4 cups plain flour
Water – quantity will vary, probably around one cup
500g pork mince
Half a large wombok cabbage
2 generous tablespoons of butter
1-2 tablespoons rice wine (or a bit of Riesling if you don’t have rice wine)
Salt, pepper (white pepper if you have it)
1 tablespoon soy sauce