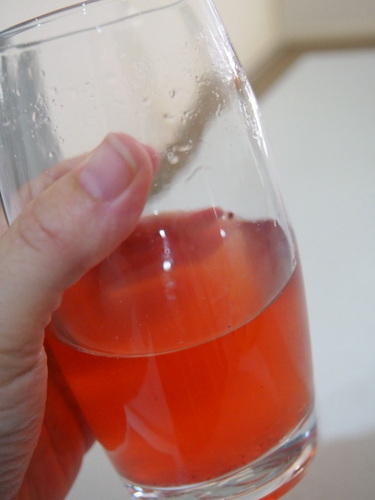 When you pick a lot of blackberries, you need to find something to do with them.  And I love this drink.  Yes, I am talking about a drink not a plant.  A shrub is a very old fashioned, and very interesting, drink.

I first heard about shrub when I was reading a book written in the United States about the cottage food industry.  There were several references to shrubs being made to sell at local fairs. “Oh,” I thought.  “It must be something that they make in the southern states of America or something.”

Well, sort of.  Turns out it IS a popular beverage in the states right now, at least according to my research it is.  Popular not just for people making artisan products to sell, but also as a key ingredient in fancy cocktails.  It was a popular type of cordial (often laced with alcohol) drunk during US colonial days.  Before that it was popular in the UK – kind of like an early pre-mix that was also used in punches. It has its origins as a 15th century Persian drink called sekanjabin.  Not quite sure how sekanjabin became shrub.

A key ingredient of shrubs is vinegar.  That’s right – vinegar.  Kind of like a sweet or sour kind of thing.

I know you might be thinking – too weird.  But I love fruity vinegar drinks.  They were very popular when I lived in Taiwan, I suspect having been adopted because they were trendy in Japan.  It was not uncommon for a gourmet multi-course banquet to be punctuated by a shot glass of plum vinegar.  I learnt to love plum vinegar, and would often drink it watered down in the hot months.  I found it really assisted my body to manage the extreme heats.

Having recently been blackberry picking, I thought I would try some with these wild berries.

I was totally wowed.  And I feel almost healthy drinking it.  Well, there is a BIT of sugar in it, but good quality vinegar can have amazing health benefits.

So here, without ado, is my recipe for shrub. It you plan to gift it or make it commercially, you may want to pasteurise it by heating it. But I don’t think mine will be around that long.  And besides, I believe in the health benefits of raw vinegar.