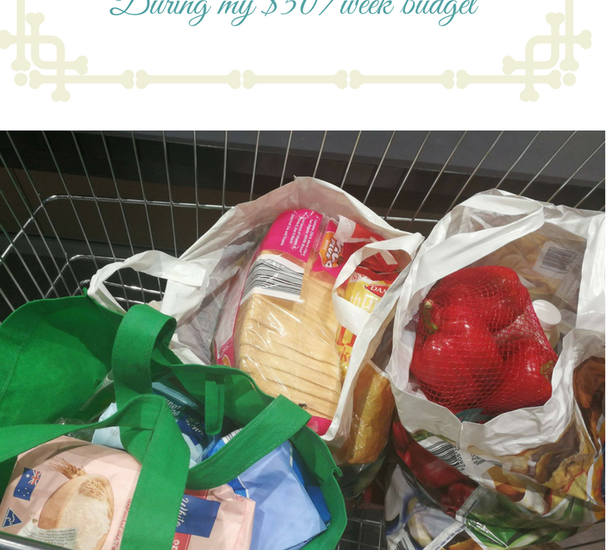 This week I went shopping. I really went shopping. For the first time in months I used a shopping trolley and I piled things up in it, digging into my kitty and spending a huge $78.05 (still much less than the average weekly shop).

Using a shopping trolley when shopping is dangerous.  You lose perspective about how much you have purchased because you don’t have to physically carry it (at least not until you get home – more on that later).

Years ago I had a colleague who worked hard and had a good job.  He earned much more than the average salary in Australia.  But he threw it all in to go an work for the family shopping trolley repair business.  I have never forgotten what he told me.  He said that supermarkets will pay a fortune to fix trolleys.  They know that a broken trolley – for example one that has a wheel that is wonky and makes it difficult to push around properly – can cause thousands of dollars in lost sales.  Supermarkets like you to use nice big trolleys that wheel easily around so that you can spend, spend, spend.

Some supermarkets attach GPS trackers to monitor the movement of trolleys around their stores.  Often this research shows how much people (usually women) dilley dalley – consumers rarely rush in and rush out but spend time hunting and gathering along through the aisles.  The best way to avoid idling (and spending) in the supermarket is to carry what you buy so you get a sense of how much you are actually buying.

I must say that I thought it was so much fun to be like a regular consumer with a big trolley, all cashed up and able to spend. While in ALDI, I felt so high with the prospect of having a full fridge and my mind was playing over and over the amazing meals I would cook.

That sensation quickly vanished when I paid and had to get things to the car and then had the job of carrying not one, but three, bags of shopping upstairs from the underground carpark to my unit.  And then finding places in the fridge to put everything away.  Because I also had kids school bags and other t hings, it took several trips.  Actually the process of putting away groceries took nearly all night and after that I was pretty much too exhausted to do any creative cooking.  “Wow,” I thought to myself.  “This is how my life used to be – spending hours and hours shopping, standing in queues and then unpacking.”

While I have enjoyed having a full fridge, having more choices about what to cook has also led to a feeling of being ever so slightly overwhelmed. It is harder to keep track of what I need to use up as a priority, and I am worried that maybe, just maybe, I will create more waste this week and next.

Even with the splurge I still have $40.80 in the kitty (now $90.80 because of the additional $50).  Next week will be a quiet week on the grocery front, and I will be more focused on using up what I have.

Monday:  Out late shopping (and in a thunder storm).  My ex kindly agreed to look after the boys and fed them.  I had random leftovers.

Tuesday:  Boys with their dad. I was taken out for dinner (not with Mr Red Sports Car).

Wednesday:  Walked to work in the morning as my car was still being fixed.  Somehow I forgot my lunch, which I had packed ready to go (doh!) so had to buy lunch.  After work had to rush to pick up the car (in the rain).  My ex kindly gave the boys dinner. I had random leftovers for dinner (I am trying not to eat big meals and was recovering from the big lunch).

Thursday:  Made a one bowl chocolate cake with pink raspberry icing for Little A’s childcare fundraising stall.  The raspberry icing, made with real raspberries, was gifted by a foodie friend (Susan from Susan’s Sumptuous Suppers) who had leftovers.

Friday:  I was treated to lunch as part of a food review. It was simple and nice.  For dinner I made a batch of homemade Japanese golden beef curry (my recipe has no added MSG, nor does it use palm oil).

Saturday: We had a big day running around to a whole heap of appointments.  So I decided to treat my boys to a McDonalds lunch meal because, well, it saved my sanity.  I felt a bit blah afterwards, but at the time I just LOVED the treat of being able to sit still for a while.  I had a big bake up in the afternoon, making ham pizzas for Big A (Little A wanted more curry), zucchini chocolate cake (using up more of that fabulous icing), and roasting up a batch of capsicums to then preserve in oil (a bag was on special at ALDI this week for only $3.99).

So that was my week.

Do you enjoy a big grocery shop?  And have you ever tried giving up shopping trolleys?