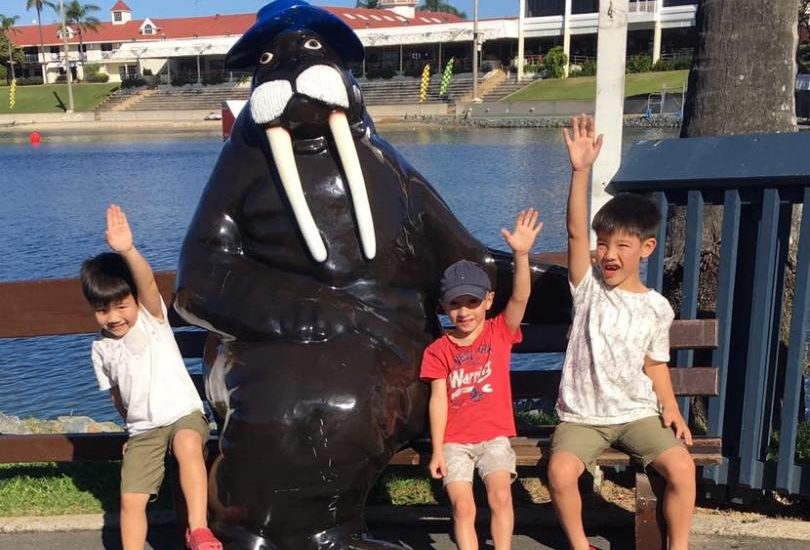 Hello from the sunny Gold Coast!  Ms Frugal Ears and kids have been on holidays this week.  Yes, sometimes I take holidays.  And sometimes I even spend money on holidays.  It is all about my philosophy of balancing saving with enjoying the good life.  But that doesn’t mean that I totally lose my head and spend on holidays.

You might think that theme-parkville was not really Ms Frugal Ears style. You wouldn’t be wrong in thinking that theme parks are not a big thing for me.  But the thing is, I have family on the Gold Coast. And I really value my relationship with my mum, stepdad, lovely sister and her family.  So when my ex decided to take the boys to Brisbane to see the outlaws, I thought it would be a great opportunity to take them up to the Gold Coast to see Nana (who refuses to go by that name) and family.

First stop was the airline tickets.  I got a good deal flying to and from Canberra with Virgin Blue, and five per cent off on top of that with a voucher purchased via The Entertainment Book.   Accommodation was sorted because we stayed with family.  And I also didn’t need much transport beyond a few Uber trips and a Light Rail excursion because I am with family.  Food was simple as there was a supermarket nearby – and my mum and sister are fabulous cooks so we had a lot of great home baked food (including ANZAC Day biscuits).

Next step was theme parks.  Ahhh, theme parks.  I have NEVER visited theme parks or taken my kids to them during family visits.  We are usually having so much fun chatting and catching up, sometimes op shopping and sometimes shopping at Harbour Town (which has the best lingerie shop with expert fitters – sometimes there are things that as a woman are worth splurging on, just saying).

Anyhow, back to the family holiday and theme parks.  As soon as I mentioned the Gold Coast, Big A (now seven) announced he really, really wanted to go to Sea World.  Other friends at school had come back extolling the delights of Sea World and all it has to offer.  My Mum’s apartment looks across the Broadwater to Sea World so I can hardly pretend it is not there.  And wouldn’t I be a terrible mother to take them to the Gold Coast and forbid them to go?

So we did theme parks. My mum offered to pay for the tickets – after I told her not to buy too many presents because they already have too much stuff she decided to invest in experiences again.  But I wanted to do the research so that she could get a good deal.

If you know you are going to the Gold Coast, never ever wait until you get to the gate to pay for theme tickets.  It costs $80 just for a child for one day, and more for adults, and I believe that the queue is longer.  The best value is to buy online and to buy a pass that includes other theme parks.  Annual tickets are very good value if, like me, you have family and it is likely you will be back within a year (or if you live close by).  They also take the pressure off having to do absolutely everything in one day to get your money’s worth.  This can be stressful for little people, and the parents who are carrying things and mopping up the tears when what goes up goes down.  A pass allowed us to go for a few hours, come home for naps, and spread out our time.

This is the research that I did (with help from my sister):

In the end we went to Sea World for around two and a half hours one day, and then had a short trip to Paradise Country the next day.  Sea World is a little big and overwhelming but so much fun for kids. Paradise Country was a lot more laid back and chilled – we got to pat kangaroos, see koalas and taste billy tea and damper (Little A even got to help make it, of sorts).  My sister said she stayed there for an overnight camping (they also do glamping) experience, and I am interested in doing that another time.

A word of warning – Sea World has nearly the most expensive ice-creams I have ever seen at $6.90 for one scoop.  We had already promised the kids so it was hard to say no (and they did enjoy it – to them it was the highlight).  We did briefly consider sharing three scoops for $7.90, but they were really set on their own ice-cream each.  We also noticed that it was almost next to impossible to do anything without a compulsory exit through a gift store.  Sea World takes photos on arrival and then presents you with a picture passport that costs $45.  “That’s a lot of money to pay and not that good,” said Big A.  Proud moment as a mum.

We didn’t visit other theme parks, but my sister said that the Currumbin Wildlife Sanctuary regularly has specials and promotions, often through coupons. So if you plan to visit there make sure to check it out.

Maybe you are not planning a Goldie holiday.  But I am writing this post to show you that by shopping around you can make big savings. It takes a little more effort, but you will save time queuing at the gate, and then you will have more money to do other fun things when you are away.  $40 buys a lot of ice-cream, even if it is overpriced because it is at a theme park. Just saying.