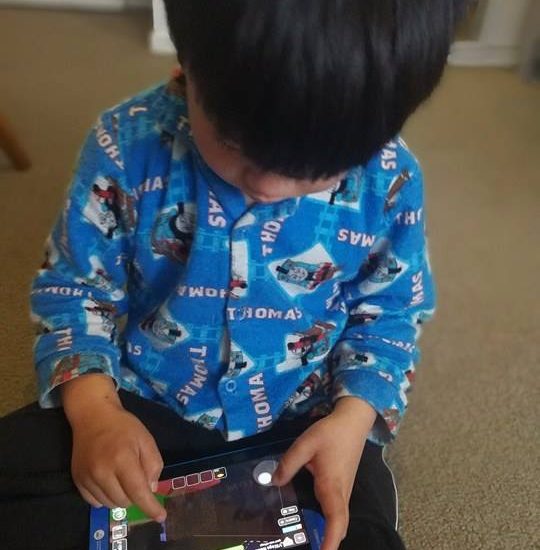 5.53am yesterday morning Big A woke me up, talking rapidly like a highly strung bundle of energy.  “Mum, come look at this cool new thing I have found on the iPad!”  No, we are not usually early risers like that.  And yes, we have a bit of a gaming addiction going on in our household.

Growing up we never had computer game like most other kids.  Actually, growing up we didn’t have a lot of toys or stuff.  We had a big chest of drawers full of toys in the living room, and a box full of dress up outfits. (Mum was a fashion designer so she always had a lot of clothes. These were usually adult dress ups and so much fun.)  Our neighbours lived in this huge, spooky mansion.  They had an entire playroom full of toys.  They had shelves full of toys, stacked with all the latest stuff. We loved going to visit to play with their toys.  They even had one of the first computer games in Australia (space invaders) and sometimes they would let us play.  We enjoyed it, but we did not feel jealous.  At least on some level, we understood that these were more toys than any kid really needed.

We were comparatively late to the iPad scene, buying an iPad2 in 2011. I have that same iPad, which has survived despite Big A dropping it and cracking the screen around two years ago. I have been *meaning* to get it fixed but somehow time has gotten away.

This week there were tears.  Big A couldn’t turn on the iPad – the main page was blank apart from the time.  There was no way he could log on.  While we have since solved the problem (what a miracle!), in the interim I decided to splurge and purchase them a tablet each. Yes, one each.  For the grand total of $98 each from JB Hi-Fi (actually less because I got a 5% gift card voucher from the Entertainment Book), I purchased them a Lenovo Tab 3 A7-10 7″ Tablet.  They know me spending money on things like this is very rare, so it was a big moment for them.  They are thrilled.  Thus getting up at 5.53am (in fact he was up much earlier – that was just the time he woke me up).

I am no way affiliated with Lenovo.  In my personal opinion, if you are looking for a cheap tablet for kids this is a great product.  My kids were using it within minutes.  They were impatient for me to sign on with my gmail details. The four-year-old downloaded a game and was playing with it within five minutes (if you were wondering, Little A is not yet at school but has worked out how to type when he wants to search for games online).  It is a sturdy and reliable product, easy to use and is only for Wi-Fi so I don’t need to go and buy a sim card and set up an account.  Did I mention it cost $98?  Well, actually less because I used my Entertainment Book and got a 5% discount on a JB Hi-Fi voucher.

Both of my boys like playing games on tablets and the computer more than I would like them to. Perhaps I could supervise more – I am never really sure what they are playing, although I do know enough that their choices are age appropriate.  They also like watching youtube videos. Why is it that watching videos of other kids playing computer games or with toys is more exciting than playing your own games?  It is a whole different generation.

I am aware that excessive online time is not considered good.  A week or so ago there was an article that went a bit viral (and which I now can’t find – can you?) about how too much screen time is causing psychological problems in children.  In Taiwan, it is illegal for children under two to use iPads. I sort of understand this strict measure, as I have been out in public in Taiwan and too often seen the iPhone or iPad being used as an electronic babysitter.

As a busy single mother, I must say that I am thankful for the electronic babysitting services of the online environment. I wouldn’t be able to write this post, for example, without it. Nor would I be able to cook and clean and put food on the table.  I know there are wonder women out there who have managed to multi-task for years, but I must say this really helps.  I have given up perfectionism and now I am just focusing on realism.

I am, however, aware that Big A (now 7) is quite addicted.  He gets up super early to play online.  He was DEVASTATED when we thought the iPad was broken (since working).  His ideal day is one spent indoors glued to the screen. He begs me to stay at home.  In our previous house, the kids rarely if ever played outdoors.

My approach to this is not to make him wrong about it. I think his excessive retreat into the online world is a coping mechanism.  He had seen a lot of change in recent years, including the separation of his parents.  This is a form of escapism for him, and I suspect he might unravel if I now banned his online world.

Instead, I make sure that I schedule at least one activity out of the home that does not involve a screen and ideally involves people. Often it is going on playdates, or going to church, or cycling or going to a park.  There is always resistance to going out, but when I make it fun I can get him away and make him forget the iPad – at least for a while.

So what is a frugalista to do about all of this technology and the impact on kids?

I don’t have the answers, but here are some suggestions based on my own experiences:

How do you deal with screen time in your family?  Do you have any frugal tips for the digital age?