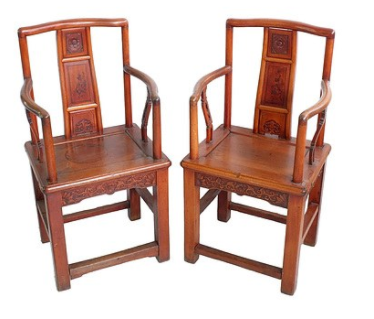 A pair of old Chinese wooden carved chairs.  That was pretty much the last remnant of joint furniture purchased with my ex-husband during our marriage that I didn’t want.  “You sell it,” he said when I offered him the chairs that he had once lovingly selected.  Fine.  But how on earth was I going to do this?

The chairs were good quality, attractive and made with good craftsmanship.  Many years ago they stood by the front door to our home, one of the first things guests saw when we welcomed them into our home.  When we returned from posting to Taiwan, I didn’t know what to do with them. I no longer wanted them there because, being old, they were a bit rickety and unsafe for children to sit on (or climb on).  For a while I hid then in corners and there they got covered with kid’s toys and clutter.

When I moved into my new apartment in January the chairs then sat untidily in my spare parking space, making it look like I was decamping to the basement.

I thought of selling on gumtree or Ebay – but I had no idea how much they were worth, or even what they were or how to describe them.  Were they truly antique? Or a knock-off?  I could recognise they were Chinese, but from what province and what style?  And would people even want to buy them?  What if they were made by a really famous carver, or they had come from the Forbidden City and I sold up my kids inheritance for a pittance?

In the end I decided to sell at auction with Allbids, Canberra’s top auction site.

I had planned to blog at length about the steps in this process, about following the items online on a daily process, but all I can say is that it was so quick and incredibly easy.

So easy.  I wish I had known about this service earlier because I would have sold more junk (aka treasures) this way, especially when I was selling the house and moving.

All I did was make a short drive to Fyshwick to drop off my chairs at the Allbids warehouse in Fyshwick.  (They can also collect, which is useful if you have a whole home full of stuff.)  Andrew Whitehead, a Certified Fine Art and Antiques Valuer and one of the foremost experts in valuing Asian art in Australia, looked at the chairs and assessed they were nice provincial pieces worth between $100 to $200 each.  It turned out that Allbids had another pair of a similar design in their warehouse already, so knew what the chairs were truly worth.  Perhaps I was indeed hoping they were worth a fortune, but it was a huge relief to have a definitive answer about what range I should look at.

Allbids took professional photos, which it put on their website.  I didn’t have to do anything – I didn’t have to write an advertisement, take photos, answer inquiries from people about what the chairs actually were (which I couldn’t answer because I didn’t know), or guess a price.  All I had to was wait.

The starting bid on the first day was $20.  $20!  “Don’t worry,” said Rod Evans, Allbids owner.  “This is normal.  There is always a low starting bid but it will trend upwards right at the end.”

$70.  Then a bit more.  Finally the pair sold for $231 to one of Allbids regular clients.  The commission cost $42.74.  Allbids handled delivery to the new purchasers, paperwork and communication.  All I had to do was to wait for the money to come into my bank account, which happened quickly and easily. Before I knew it I had $172.99 in my account, which I could use to pay off my mortgage (or to go skiing again).  That was $172.99 more than I had had when these lovely chairs were just clutter in my life.

This whole experience has opened up my eyes to more possibilities at home.  What other things do I have at home that I like, but don’t need?  What else could become a treasure for someone else, and help increase the gold in my bank account?

This is a sponsored post, written after I approached Allbids because I really wanted to sell my chairs, then realised I liked their business and wanted to work with them.  I believe selling stuff you don’t need in your life at auction a great way for frugaleers to declutter and reach their financial goals.  Stay tuned for more posts about Allbids.

Have you sold on gumtree?  Or Ebay? Or auction?  What was the experience like?