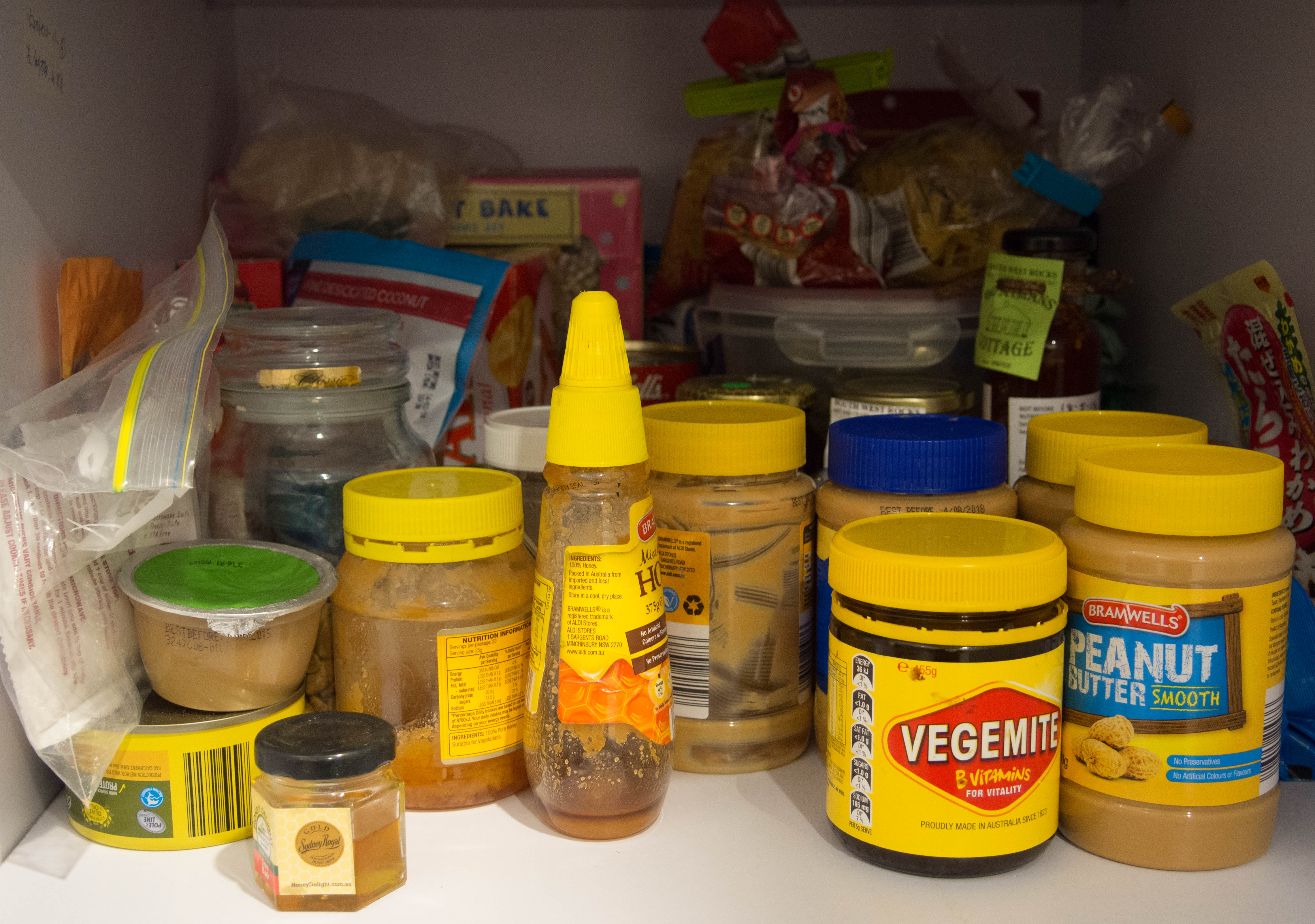 Welcome to day two of the $50/week challenge.  I am encouraging you on this challenge as I mark one year of living on $50 a week.  Yep, one year.  I started it as a month-long novelty (because I knew I would be away a lot last September) and then I found I could do it and decided to extend until Christmas. Then I decided to try doing it for a year.

Well, I looked at my cupboard one day and realized I had a lot of stuff. I had only been back from Taiwan two and a half years. I still remembered what it was like to throw out (and donate) lots of food when I moved back to Australia, and how sad it was to waste so much.  I started with a clean slate, an empty cupboard, and vowed I would never let that build up happen again.

And yet, cupboards were filled to overflowing. My freezer and fridge weren’t that much better. I knew I planned to move sometime in the next year to eighteen months (in the end it happened within six months).  I hated the anticipation of needing to throw out stuff out.

In 2015 and 2016 I participated in the Live Below the Line challenge, which involved living on only $2 a day.  I enjoyed the creativity of planning meals within a tight budget, although I admit it was a lot harder than I thought it would be both times. I lost a lot of weight both times.  But I also noticed how I appreciated my food and how I wasted less. For example, rather than throwing out apple or mandarin peels I would use them to make tea.  Meals that didn’t really work out (like homemade sourdough bread that ended up being hard or gnocchi that fell apart), I still ate anyway because I was so hungry and grateful.

When I lived in Taiwan I noticed that people didn’t seem to buy as much for groceries as in Australia.  Costco is quite a thing in Taiwan and the best way to buy things like bulk beef or seafood.  But in general, I would observe people putting packets of maybe 150g pork mince into their trolleys rather than 2kg (or more) of beef mince.  People also visited local wet markets of a morning to buy fresh vegetables, sub tropical fruit, seafood and meat.  On visits back to Australia I was somewhat shocked to see people’s bulging supermarket trolleys full of packaged and processed foods.

As I looked at the pile of food I had stored in my own kitchen, I realized I had hundreds of dollars sitting right there.  Further, I realized that a large amount of it would be just thrown into the bin and never actually eaten.  Did you know that in Australia and other Western countries around 20% of good quality food is thrown away before it is consumed?  That’s right one in five shopping bags full of perfectly fine food is turfed out for no good reason.

Of course, I had over the years tried to cut down on my usage. I was tracking at under $15/day for our budget and then vowed to reduce to $10/day ($70/week).  But I found that I still wasted too much food.

A big disclaimer here is that I am a short, overweight woman who really shouldn’t eat that much.  I am also a foodie so regularly eat out at events, often for sponsored food review purposes, or work functions.  My kids are with their dad at least three nights a fortnight.  When they are with me they tend not to eat a lot anyway, because being 5 and 7 they still have small appetites. So overall we do not really need to eat a lot.

I entertain semi regularly, including spending more on ingredients and wine than I would normally for the car wreck I dated last year.  The man who is now the love of my life now comes over for dinner regularly, and sometimes I will let him bring things (e.g. treats for the kids like white chocolate) or take me out on dates. (Yes, I do take him out occasionally including a birthday treat to a four-course Truffle Dinner at the Canberra Yacht Club.) My Dad has visited several times during this challenge and I also let him do a bit of shopping for me from time to time – the sort of thing you do when you stay at someone’s house, you know milk, bread, things on the shopping list.  I have a loaves and fishes approach to entertaining. I figure that whatever I have at home will stretch to whatever guests I have. I rarely get panicked about people coming over and race out to buy big cheese platters or fancy wine.  I often cook things for morning teas or for church functions. I believe that generosity comes from the heart.

As I type this I have $152 credit sitting in my food budget kitty. I find that on average I probably only need $40/week but I like the buffer of giving myself an extra $10.  On this amount, I STILL waste food. Although the amount has reduced, and I still find that my cupboards are bursting.  This is what works for me. If you have a big family that includes active, hungry teenagers you might find that $50 is not enough.  But why not challenge yourself to use up what is in your pantry by sticking to $50 a week for at least a week and just see how it goes? Even if you reduce your overall consumption you will still be ahead.

I find the first step in this challenge is recognizing you have a lot of food already.  When you are conscious of it, you will see that abundance is everywhere and, for most middle-class Australians at least, you are not going to starve.  (Yes, I am aware that many people are starving in the world and there is a serious homelessness problem in Australia.)  Functionally, you can start this by cleaning out your cupboards and doing an inventory.

I am a busy working mother with kids and a writing addiction (read, I am lazy at housework). Ideally to do today’s challenge you could take out ALLyour food from your fridge and cupboard, rearrange nicely and do up an itemized spreadsheet that includes the full cost of all items. You could even put things into nice Tupperware containers.  If you plan to spring clean anyway you might find this liberating.

I won’t be doing this.  Instead, I have just cleaned out one shelf in my cupboard. I removed all the food, wrote a list of what is in there, made a guestimate as to costs, and put it back in (neatly). I haven’t done it (yet), but I plan to stick list to the pantry door.  I will then make a conscious effort to use up what is on that shelf.If I don’t have the energy, I will just assign $2.50 to each item – so if there are 20 items, the approximate cost would be $50 worth of stuff.   That’s one weeks’ worth of groceries right there!

Based on my shelf (above), this is my rough guestimate of the value:

If you don’t know the value, estimate it. If you really don’t want to estimate it, assign a nominal value (e.g. $2) to each item.  You would be surprised at how the little things add up.

Your challenge for today is to clean out your cupboards in preparation for the challenge.  Don’t stress about doing it perfectly – start with one shelf. Or if you don’t have time, identify a few random items you have had for a while that you need to use up. And make sure you tell us about it on the Frugal Dare to Millionaire Facebook group.