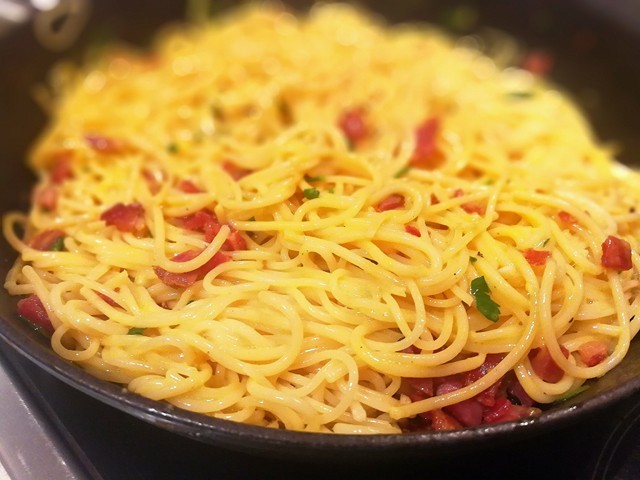 Growing up spaghetti carbonara was one of my Dad’s favourites. I should qualify this and say that growing up, after he and my mum divorced, this was one of the meals that he could actually cook. He taught my sister and I how to cook it, so when we visited on school holidays we would cook it. Often we would cook a lot of it.

Perhaps for that reason, I haven’t made this in a long time. Perhaps because I ate too much of it growing up, or because of the perception that it is fattening. Well apparently the enemy is sugar now rather than pork fat, eggs, cheese and cream but like most things, everything in moderation.

On the subject of ingredients, good quality eggs really make this dish. I am lucky that my partner gives me farm laid eggs from his parent’s property. (I am no longer allowed to refer to him as my new boyfriend – three months yesterday but he has practically moved in so he has a point!) Some type of smoky pork is also essential – I used smoked pork hock, which I purchased on special from ALDI. I use cream because I like the texture. The try Italian way, as confirmed by an Italian friend at work, is to only use eggs – but you have to be very efficient because the eggs set quickly.

Absolutely essential, however, is generous grindings of fresh black pepper. Not white pepper, or fancy pepper, but rather black pepper. Some people say that this dish got its name from the coal miners who used to enjoy eating this dish. Whatever the origin, a bit of pepper will give this dish a real kick.