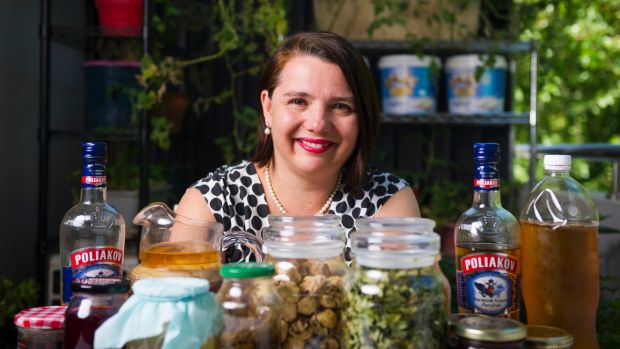 On Friday I was waiting a bit nervously at home for a photographer from The Canberra Times to arrive while trying to appear oh so casual about it.  He was coming to take a photo of me for an article about Financial Independence Retire Early (FIRE) written by Sylvia Pennington that I was quoted in. I dressed myself up in a ‘free’ dress gifted by my sister, tidied my unit up and fussed about things that didn’t need fussing over.

The photographer (Dion Georgopoulos) seemed relieved that there were sufficient interesting things to photograph.  And we had a lovely time chatting about ways to save money and life cheaply.

“To be honest, before I got here I wasn’t sure what to expect,” he said.  “All they told me was that I was photographing someone who was frugal so I was expecting a really bare and boring place.”

Ah, no. My inner city apartment, with its modest mortgage I am reducing aggressively, is perfectly normal. Middle class normal.  It has all the things you would expect to find in an apartment, although most things have a frugal story.  The sturdy lounge set, for instance, was bought from the Salvos, super cheap over a decade ago.  Some artwork is by a talented high school student friend and the rest is from garage sales.  Our BBQ on the balcony is super small, makes fabulous pizzas, and is also our cooking utensil for camping trips.  The bookcase, a temporary one, was given to me for free by someone in my Buy Nothing Project group.

Once we got chatting, I explained that really I am not into living a life of deprivation and misery in the hope of one day being financially free. Instead, I aim to live a fabulous life – and I mean totally and utterly FABULOUS – while still pursuing my financial goals.

The article that I was interviewed for was about the FIRE (Financial Independence Retire Early) movement. I am part of this, and yet I am not part of this.  Let me explain.

Years ago I was fortunate enough to complete a Mindfulness-Based Stress Reduction course, which is based on the pioneering work of Professor Jon Kabat-Zinn.  This was truly life-changing stuff for me. One thing that really stuck was this idea that the future does not exist.  That’s right.  There is no such thing as the future.  All we have is the present.  This exact moment in time.

Mindfulness is about living in the moment.  Mindfulness meditation, for instance, focuses on the sensation of each breath – breathing in and out, just noticing it for what it is. One of Kabat-Zinn’s famous mindfulness activities is to eat a raisin.  When was the last time you ate a raisin? Perhaps squished in raisin toast covered with butter, or maybe in a hot cross bun?  I bet you never paused to look at the raisin, to listen to it, smell it and marvel at the individual folds of the raisin, each one of which is unique and individual.

Zen imagery over, the relevance to the FIRE movement is that really all we have is the here and now.  The future is a construct that doesn’t really exist as such; if you spend all your life worrying about it you are not really living in the present.  That said, it is entirely right to save for the future, to make plans for things that are to happen, and to make solid investments.  When you are in a good financial situation, and when you can see your money growing, it brings the satisfaction of being able to sleep at night knowing that you can pay for the roof over your head and to put food on the table. But more than that, having a good financial plan helps you be able to bring your dreams into reality.  And isn’t striving towards your dreams something that makes you happy in the here and now?

The law of attraction demonstrates that a key part of success is asking for what you want.  You can achieve amazing things when you consciously train your thoughts to ask for what you want, and then (this is important) to receive it with gratitude. It is important in this that you imagine that you already have this abundance already, that in this moment of time it is as if you have already attracted this abundance.  This is extremely important because if you are always thinking about denial or lack, that is what you will always attract.

I believe that appreciating and enjoying the abundance you have, and being thankful and happy at the moment, is important for attracting wealth.  I’m conscious that some people who were dirt poor have gone on to be extremely wealthy (Kerry Stokes who grew up living with an adopted family in Melbourne’s slums is a case in point). I was listening to billionaire Gerry Harvey talk in a podcast on The Pineapple Project the other day. He grew up living in a garage after the family home was destroyed by fire and I was struck that he really made a decision, a conscious decision, to be wealthy.

When I was married, we were heavily negatively geared in residential property investments (we had ten). Then the market turned and rental values fell. It was tough, but we got through.  For years we did without because ‘one day’ we would make it. It wasn’t all miserable; there were some good times.  But there were many things I wanted to do but couldn’t because we were saving.  I found that I could manage these extreme savings measures for around five years, but after that, I began to feel resentful.  I found myself asking what the point was of saving, saving, saving if I could never spend money doing things that I wanted to do. For instance, I moved to Canberra in part so I could go skiing but only went on a day trip once in over a decade; despite having so many houses we could never afford to go as it wasn’t a priority.

I think something that puts this delayed gratitude into perspective is the health issues that Neil and I have experienced over the years.  As many on here know, Neil had a heart attack – followed by a lung infection – just before Christmas. It was entirely unexpected, and our plans to go caravanning up to the Gold Coast over Christmas were cancelled.  This is not the first time Neil has been sick; he had cancer (Hodgkins Lymphoma) 19 years before that. I have not experienced anything that bad, but I have had two ectopic pregnancies, neurosurgery, and ruptured appendicitis when I was 13 (when I was at boarding school and unattended in the sick bay for a long period of time).  [Gee, my life is a bit of a soap opera!]

These experiences demonstrated to me that I need a balance between living in the now and planning for the future because you don’t really know how long you will have.  My Neil and his family want to go on a cruise this year, and so we are going.  That said, we got a fabulous deal on it (courtesy of his frugal mum) and we are flying to Singapore to join the cruise via budget airline Scoot.  We want to go skiing in Japan next year with my Dad and possibly other family and we are already hunting for cheap flights and accommodation deals.

I am hardly a spendthrift. I am still extremely frugal in many ways. But our budget includes doing fun things like cruising, skiing and going to concerts – two weekends ago we went to Wollongong to hear an Australian rock concert and economised by staying at an AirBnB and eating at a local club (and stocking up at ALDI).  Last weekend we spent a magical evening at Diner en Blanc Canberra, where I volunteered as a table leader (a role that enabled me to meet some amazing people).

I guess the key to this is that we value people and relationships and so we are willing to spend on experiences that involve having fun with people we love (including each other).  When we look back at the end of our lives, isn’t it the laughter with family and friends the things we will remember and cherish? I know of too many couples who focused on work and career and buying a big house and investing into super, only to retire and find out that they no longer had anything in common.

“So what things do you do that are frugal,” asked Dion the photographer.

“Well,” I answered pausing to think.  It is actually hard to articulate this sometimes as I consider the way I live to be so normal.  “I cook meals that cost less than $5, I do a lot of home fermenting and pickling, I lived on a food and grocery budget of $50 a week for over a year, I cycle to work, I’m about to sell my car, and most of my clothes are free or from an op shop.”

We then went on to chat about how do save money by negotiating a better deal on your electricity bill just by asking (“I didn’t know I could do that,” he said), how to ditch your overpriced credit card in favour of Qantas Cash, how homemade kombucha costs 10c a litre as opposed to $7.95 for a 750ml processed version at my local supermarket, and the fact that there is a bumper blackberry crop this year for those who like to forage.

Is the frugal life fabulous? I sure like to think so.  My name is Serina and I’m an out and proud frugalista – are you one, too?