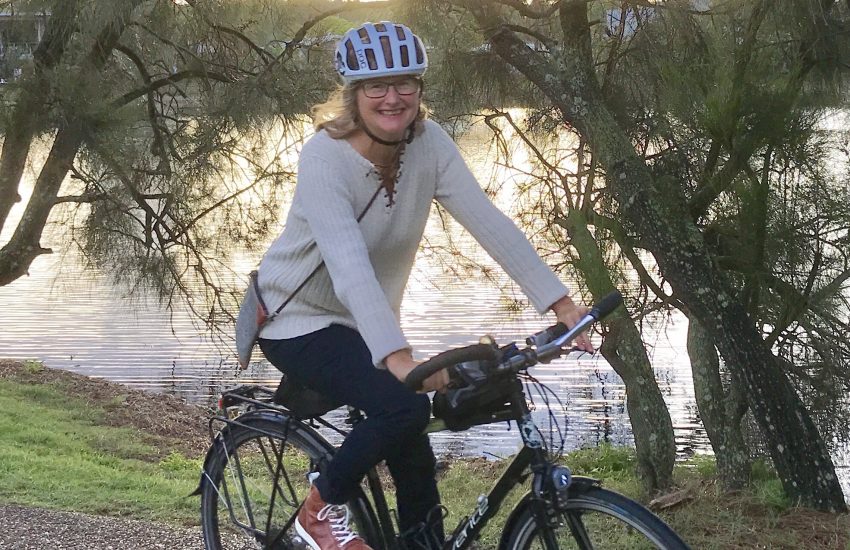 Could you imagine cycling everywhere you could for a year?  That’s right, a whole year?  Well, that’s a challenge that friend and talented writer Gail from abike4allseasons did.  And she is STILL on her bike.

Wow, what a year 2018 is shaping up to be!  I’m back at work, crazy busy in an exciting new role, and then on top of that, this blog has been picked up in the media.  It seems that nearly every day someone tells me they have seen me in the paper.  It feels lovely, actually, to be out and proud as a frugalitsa. I worried that people might think I was uncool or scroogey, but surprisingly to me, please get it.  Yes, people are finally getting the frugalista vision, including my workmates, who actually ask me now about frugal recipes, how to save and how to invest.

No, the superstar status has not at all gone to my head (I don’t think family and friends would let me), but functionally this has all made my life a lot busier.  Which is why I didn’t end up pumping out nearly as many blog posts about transport in February as I had planned to. For this reason, and because it is such an important topic, I have decided to extend the transport challenge out until March.  Are there any topics you would like to see covered? If so, please leave a comment to let me know.

Today’s post is an exciting one – a guest blog post by Gail from abike4allseasons.  I met Gail in 2015 when she travelled from the Gold Coast to Canberra where we both participated in the rather amazing Hardcopy development course for nonfiction writers.  Several participants from that course have gone on to become published writers – some bestselling authors and others award-winning authors.  Pretty cool alumni:)  And Gail is pretty cool as well.

What struck me about Gail was that she was super keen to cycle every.  Cycle!  Even in cold Canberra weather! And even though she had flown down from Canberra, she made sure her itinerary included bike plans.  Once I got to know her more, I found out about her amazing challenge of cycling whenever she could.  I love how she has made cycling a part of her life.  And on a personal level, what she is doing inspired me to sell up my home in the burbs and move to a cycle-friendly neighbourhood. So it was an honour to ask her more about her cycle lifestyle.

Have you always liked to cycle?

Riding a bicycle has always been something I enjoyed but I think I took it for granted. My earliest memories of cycling are riding a bike as a child along narrow roads lined with sugar cane fields in Queensland. As a child, my bike was my transport to school and to visit kids on neighbouring farms. Somewhere in my twenties, driving a car took over. I still owned a bike but rode only occasionally. Driving a car was a rite of passage to being an adult. Now, I’m glad to be freewheeling again.

Are you one of those super fit triathlete types?

In a word, no. Competitive sport and extreme training programs are not my cup of tea. Leisurely rides and using my bike for transport are.

Tell me about your year-long cycling challenge.  Why did you decide to do it?

In December 2014, I decided to ride my bicycle as much as possible in everyday life. It would be an experiment to cycle through the four seasons, trading my car for my bicycle wherever I could. I wanted to get fit. And I wanted to save money because a few months earlier, my regular contracts had come to an unexpected halt.

Making significant personal changes in your life is rarely without difficulty. Launching into the unknown is exciting but it also awakens fears. I worried about not being able to make the changes that I wanted to make. Failing. And publicly too because I was writing a blog about it. Although there were some times during the year when I questioned whether I wanted to continue, I’m glad I didn’t give up because the experiment brought changes to my lifestyle that continue to be rewarding. I think it would have been harder if I decided not to use the car at all. However, I always wanted the experiment to create change that would last rather than become something extreme that wasn’t sustainable.

Was there anything unexpected about it?

There were times when I just had to admit, I couldn’t realistically use my bicycle. Travelling nine kilometres to a wedding on a rainy day by bicycle just wasn’t going to happen.

Managing the weather is firstly about having the right kit like a good raincoat and waterproof panniers. Secondly, it’s about being willing to adapt to changes in the weather. Heat, cold, wind direction, rain and sunshine are variables that take on new meaning and impact when I’m riding a bicycle. That impact might mean a change in what I wear or when I travel or how much energy I need to expend. In the case of a tropical storm, that can mean not riding at all or taking shelter until the storm passes over. I find the weather is quite manageable if I work with it and not against it.

How did you manage interstate or overseas travel?

If travelling by car, then I’ll take my bike with me. If flying to a destination, then my trip research will always include how I can access a bicycle where I’m visiting. Bicycle shops are a good option for hiring bicycles and a growing number of hotels now offer bicycle hire too. Many cities have bike-share schemes which can be accessed for a small tariff (although each scheme varies).

How much money do you estimate you saved?

I don’t have exact numbers but pre-experiment I’d fill my car with fuel about once a week. That has dropped to once a month. During my year-long experiment, I pedalled 3777 kilometres with at least half of those kilometres being journeys I would have previously made by car. This means I saved money by not buying fuel to travel 1900 kilometres because I rode my bicycle instead of driving the car. There are also savings from journeys that I previously drove without even thinking but, as a result of the experiment, chose not to do at all (like jumping in the car to drive to the gelato shop every now and then).

What advice do you have for anyone who is thinking of using their bike for commuting?

Arriving at work by bicycle is a good feeling. You will have exercised, energised your body and mind, and saved money on fuel, maintenance costs on your vehicle or public transport fares. You can also forget about needing a gym membership because while you’re riding, no matter how short the journey, you’re getting incidental exercise.

If it’s awhile since you rode a bike or you’re new to bike-riding, then joining a social riding group can be a good stepping stone to building skills and confidence. Ride a couple of days a week and then build up to more. Ease yourself into riding your bicycle so the changes you’re making to your lifestyle have the best chance of becoming normal. That’s what has happened for me and they’re changes that continue to keep me fit, happy and saving money.

Thank you, Gail, for sharing your insights on Ms Frugal Ears.  Dear readers, are you inspired now to take up cycling?