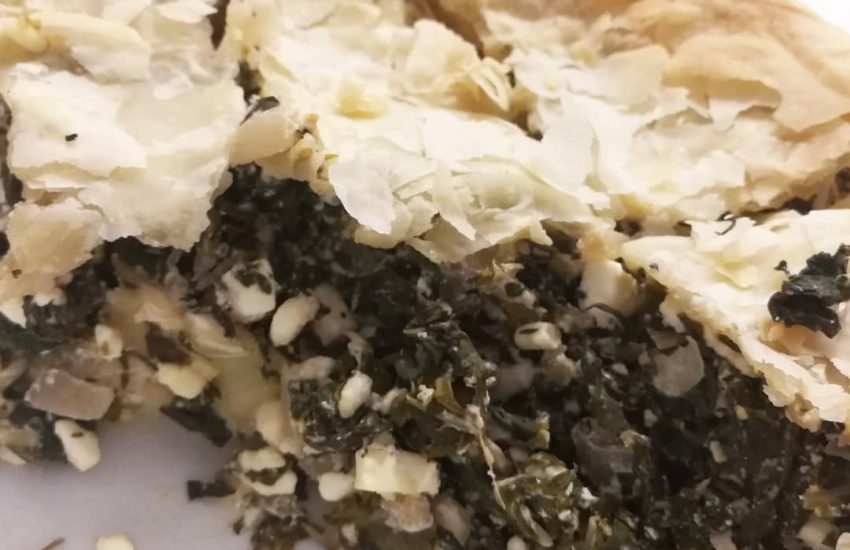 I was in a baking mood yesterday. I had heaps of writing deadlines and things to do (including cleaning the house), but I wanted to cook.  Specifically, I wanted to make a Greek spinach and feta pie (spanakopita) to take to a Good Friday potluck bash at friend’s house.  There are always lots of foodies there and I wanted my contribution to be fab.  And I wanted to make the filo pastry from scratch.

“I really think you should concentrate on writing because making the pie, let along the pastry, will take a lot of time,” said Neil.

“Yeah, you are right,” I conceded.  But I still harboured a secret desire to make the filo pastry.  I’m crazy like that.  Sometimes I just get the itch to cook something particular, and it is hard to stop me.

It is a frugalista’s dream: laden trestle tables of fresh fruit and vegies going cheap because Tom’s Superfruits has a commitment to reducing waste.  “Only buy what you need,” warned Neil.  But of course, I couldn’t resist the temptation of buying up several bunches of fresh greens, including a HUGE bunch of fresh silverbeet for only $1.  And it was huge, a real miracle of Autumn’s bounty.

How should I cook it?  I put it out to my friends on Facebook, and suggestions came thick and fast.  “Quiche,” suggested one friend. “Frittata,” said another.  Others suggested gnocchi, lasagne and even crepes. But the idea that made my mouth water was spanakopita: spinach and feta pie. I always associate this with Easter, and this is probably because it is often made as part of Greek Easter celebrations.

I was thinking of using commercial filo pastry to make this dish, but even with my $1 bunch of silverbeet, it would have put the dish over my $5 limit.  So I decided to make the pastry myself.  Did I mention I am crazy? I honestly thought it was super difficult and it would be super impossible to make the super thin layers.  People kept telling me it was really, really hard to make.  But I surprised myself.  It was easier than I thought and the pie (with the combination of fresh pastry and fresh silverbeet) even got a nod of approval from a Greek friend at the potluck lunch. And my uber cool Macedonian-Australian DJ cousin in Melbourne remarked on Facebook that, despite being non-ethnic, I was doing a good job.

Making your own spanakopita is a bit of work, but the reward is worth it.  I have noticed these days that a lot of manufactured dishes that combine cheese and spinach now include a higher ratio of cheese to vegies. I can only assume that this is because it is much cheaper to use processed cheese than processed vegetables. Growing up we always used frozen spinach in cooking. I was in my twenties before I even knew how to prepare fresh spinach.  I was certainly missing out: the flavours of fresh silverbeet and spinach are sensational.  Try this dish and you will see what I mean.

Oh, and my Neil ended up helping me make the filo pastry.  He even filming me when was making it; I didn’t quite realise what he was doing at first.  And he was a fan of the finished pie, or at least he said he was. I am lucky indeed.

This blog post is being entered into the Fresh Awards – 2018 Blogger Awards. The awards are designed to promote the beautiful fresh produce and flowers sold through the Sydney Markets.  Wish me luck!