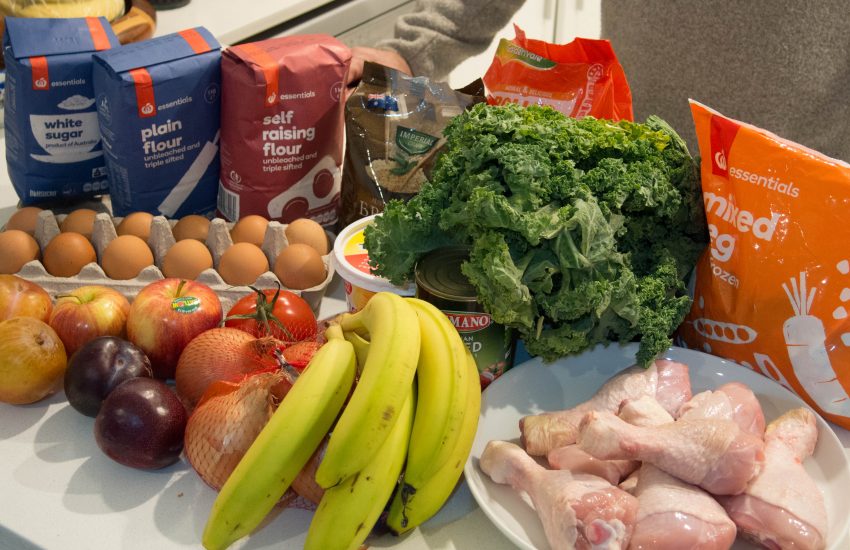 Today I have embark on a challenge of eating on only $2 a day for five days.  The Live Below the Line challenge is run by Oaktree, and aims to build awareness of food security.  This  year, I am doing the challenge with Neil.

Doing the challenge with someone else is interesting.  It means that together we have $20 to spend for five dollars worth of groceries. This means that bulk items can go further – a $1 bag of 1kg sugar is easier to incorporate on the challenge, for instance.  The downsize is, as he is a large  (ish) man, I worry that he will won’t have enough to eat on the challenge.

The thing about eating on a limited budget is that you have to be really organised. You have to compare costs, shop around and take advantage of specials.  Every cent counts.  Neil put together a detailed spreadsheet that compared costs at ALDI and Woolworths.  He was interested to find that while some items on special were better at Woolworths, our staple products were best from ALDI.

On Sunday morning we also stopped by the Rotary Trash and Treasure markets at Jamison to scope out supplies. In the past this has been a good source of cheap vegies including apple and potatoes.  But unfortunately this morning the prices were just a little higher than what was on sale at ALDI, so we left an went and bought other items from there.

That left us with $2.05 remaining. I went to Tom’s Superfruits at the Belconnen Markets at closing time.  I had to battle with around a dozen Chinese people who were grabbing items out of the discounted trolley – it reminded me of my time living in Beijing.  I persevered and managed to grab a bag of kale and a mixed bag of stone fruit and apples.

We did well, but it required a lot of thought and a lot of shopping around. Not everyone living on a budget can do this, as they might not have a car nor petrol.

In the end we came in 9c below budget:

This did not include a 5% discount on items purchased at Woolworths, courtesy of my eWish card purchased through the Entertainment Book.

The big question – what’s on the menu?  Well this is what we have planned.

What do you think of our diet?  Could you live on $2/day?  What would you cook?

I am doing this as a fundraiser – if you would like to support me I would be ever so grateful.