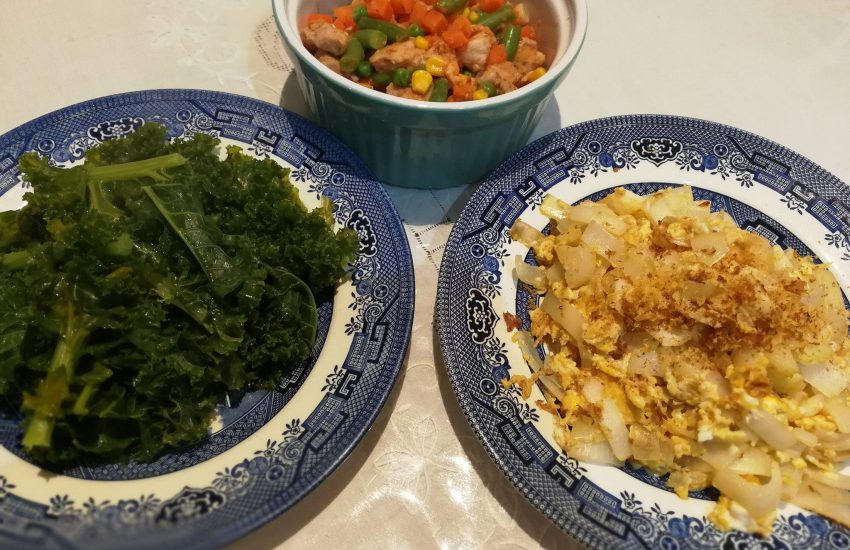 Day two came and went.  We are now two fifths through this challenge and surviving.

I woke up with a splitting headache this morning so stayed home (again).  One of the advantages to this is that I pretty much lose my appetite, which is a good thing as otherwise, I would be hungry.

Neil made me porridge and was good about letting me eat most of the leftover bread.  I was craving simple food like bread (I wished I could have had Vegemite on it).  He was home for lunch after his heart rehab and before he headed to work, and he had some leftover vegies with brown rice and gravy.

“There are two chicken drumsticks in there for you,” I offered.

“Oh, I was saving them for you,” he answered.

In the end, I had a late lunchbox (biandang) of brown rice, kale, chicken and gravy.  I didn’t finish all my brown rice, so I gave some to Neil when he came home from work as – even though he had also had a banana – he was hungry (I wonder why?).  And the two chicken drumsticks stayed for another day.  Wow, we have food in reserve!

Dinner was Chinese stir-fry:  homestyle stir-fried onion and eggs (a favourite of Taiwan’s President Tsai Ing-wen); chicken and vegetables in a sweet tomato sauce (using up some liquid from the tin of tomatoes; and a bit of steamed kale.  We served it with brown rice.  We are going through the brown rice a lot more quickly than expected, but that’s okay other meals from now on will not be predominately rice based.  We shared a bruised yellow plum for dessert.

Neil thought I was only making one dish and was quite surprised (in a good way) that I was making three.  He was even more surprised to see how much meat I could scrape off the remaining two raw chicken drumsticks.  We saved all of the leftover chicken bones and they are currently cooking in the slow cooker for chicken soup tomorrow night.

Neil and I are doing this as a fundraiser for Oaktree during the Live Below the Line challenge. We welcome your support.