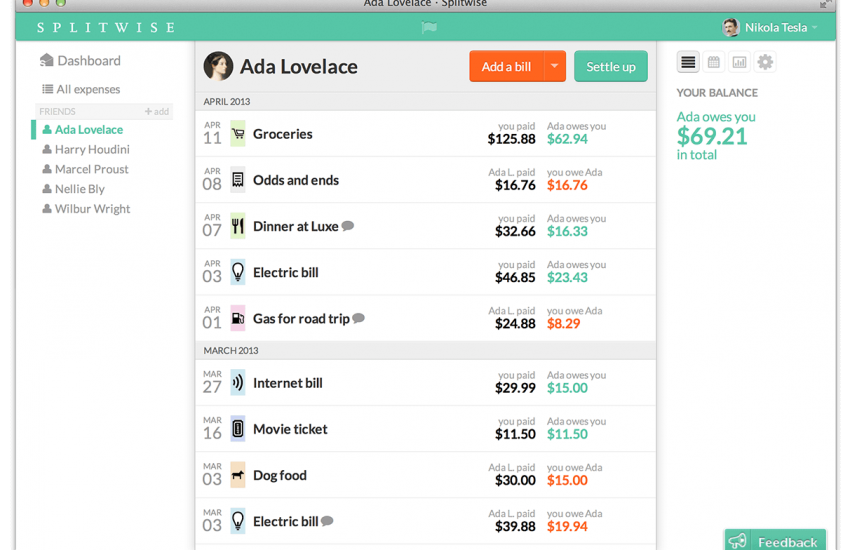 One of the key areas for disagreements in a relationship is about how money is spent.  Maybe one side is more frugal, and one side is more of a spender. Or there is the perception that that other party spends more.  Without getting into the more tricky area of the gender gap, let’s just say that a source of disagreement is how you spend money.

Last year I read a horror blog post that a friend referred me to.  A woman said that she paid for everything, and her husband paid her back. He put the expenses into a spreadsheet, but was often slow to do so.  She calculated that he was around $14,000 behind in paying her back over the course of the last year.  She didn’t see this as a problem per se; they were clearly in the early stages of a marriage and just working things out. But having just gone through a divorce settlement and having money and joint expenses on my mind, it filled me with horror.

Before I met my Neil, I went on a date with someone (who remains a good friend) who mentioned a handy app called Splitwise, which he used in his previous relationship. His partner would pay rent, utilities, do the shopping or whatever and at the end of the month she would bill him.  I filed that information away for future reference as it sounded like a good solution.

Splitwise is a simple accounting system used for tracking expenses.  It can be used for a couple in a relationship, or for housemates.  You all download the Splitwise app, and enter in whatever you spend money on.  You can choose to ‘split’ equally with the other party or that one party owes the full amount.  It helpfully points out how much you owe the other party, or how much they owe you.

This solution assumes that you have separate accounts rather than joint accounts.  For the sake of talking about how this app can work, I am assuming that this is for two people who are in the early stage of their relationship, living together, with a clear idea of what constitutes genuine joint expenses and who have similar incomes.  This is much cleaner if the couple does not have children and say, one is not home caring for children and not drawing a full income.

There has to be agreement about what goes into Splitwise as a joint expense for it to work.  Which reminds me of a story in Amy Tan’s book and movie of the same name, The Joy Luck Club.  Lena and her husband Harold split all expenses equally, even though Harold made more money and Lena made financial sacrifices for the sake of his business.  When they went out to dinner, Lena didn’t eat much but the bill was still split 50/50.  Lena’s scary Chinese mother, Ying-ying, came to visit and queried why Harold was charging ice-cream to the couples’ joint expenses even though Lena couldn’t eat ice-cream because it made her sick.  At that moment, Lena realised that despite the talk of equality, she was not being treated with respect in her marriage.

As to our finances, I insisted Neil and I start using Splitwise around six months ago.  The pivotal moment was sitting down to a Chinese dinner one night en route to visit friends on the coast.  I thought we should try to avoid McDonalds for a change, thus a fancy restaurant. Well, country Chinese fancy.

“You can get this,” he said after we ordered.

I didn’t mind, but I had just paid for beer and wine to give as presents for our friends. And also a gift voucher for his father’s birthday that week.

Later I mentioned that to him.

“Oh, I forgot about the alcohol and the voucher.  I’ve been meaning to pay you back,” he said.  “Oh, and I also paid for the petrol to the coast and grocery shopping during the week.”

What I realised was that it is easy to remember what you pay yourself, and easy to overlook what the other person pays for. In reality, we both have similar frugal values and similar incomes.  I have more expenses related to my boys, and he has more expenses related to his car, motorbike, and caravan (and he came to the relationship with a bit of credit card debt) but mostly it balances out.  It helps to be able to track what each other is spending so we know where things are at.  It promotes visibility and helps answer the question: where has all the money gone?

Splitwise worked well for us a few months but I’m embarrassed to say that it is a bit out of date at the moment.  Neil is now using it frequently. I, however, am not updating it as much.  The issue is that Neil has been doing most of the grocery shopping because he has been on extended sick leave after his heart attack.  Meanwhile, I have been paying more household bills (which I don’t always remember to put into Splitwise).  We also started investing together, buying two investment properties and shares, and we sort of lost track of where things were at because for a while money was flying everywhere.

It has just started to settle down now.  But we are now talking about whether we could live on one wage and using the other wage to pay off the mortgage, and when or whether to migrate to joint accounts.  We are not at this stage in our relationship yet, but we do have a shared view on what our investment priorities should be.

I guess what I am trying to say is that we are now moving more to a ‘together’ financial phase even though we are not quite there yet.  But in the early phase of being together as a couple Splitwise was very helpful, and it still is.

How do you manage joint expenses in your relationship?  Who pays for what?