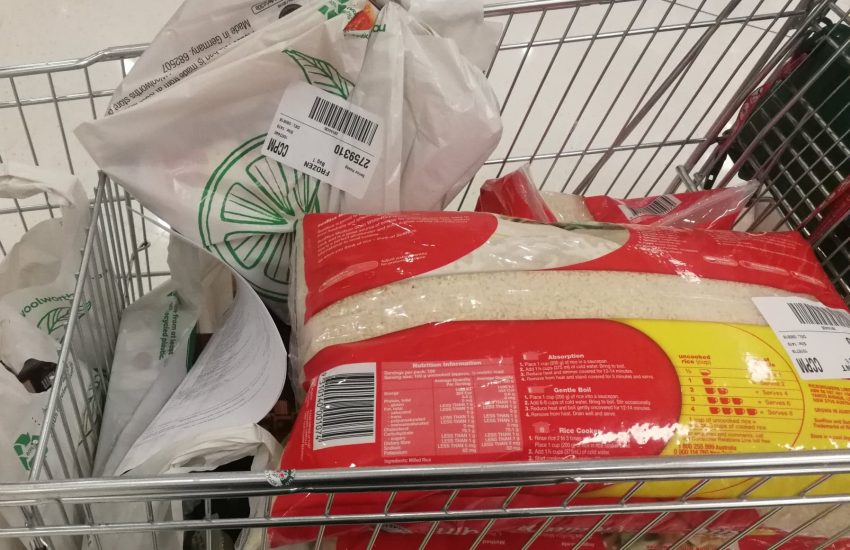 My Neil is rarely critical of me – hardly ever.  But the other night I did something he disagreed with. He was out and I was about to sit down and write, but instead a flashing Groupon sale caught my eye and distracted me long enough to lead me astray.

The Groupon sale featured up to 15% off food and drink specials.  When I clicked on it there were 13 in Canberra. I quickly worked out that while there were some bargains, none of them were at places that I was likely to dine at in the near future.  Feeling virtuous, I declared these ‘wants’ rather than ‘needs’.  Ha, I know how to avoid throwing money away on stuff I don’t need!

I was about to click off the site, when another voucher caught my eye – limited edition $5 for $20 Woolworths vouchers with 15% cashback.  That seemed like a good deal to me, so I snapped them up.  I use plural because I bought not just one but the maximum number of five. I was so excited that I did not hesitate.

Wanting to maximise my savings, I bought the Groupon Woolworths coupons through Cashrewards.  This gave me a further 5% cash back, earning me $3.75.

Feeling smug about the prospect of $120 worth of groceries for only $21.25, I then logged onto the Woolworths website (via Cashrewards again, for a discount of 2.4% cashback) only to realise I had not read the fine print.  Specifically, I would have to spend $220 in order to use one $20 voucher.  And I would have to shop online.

Now I am an ALDI and Costco woman.  I like my good value groceries.  I also like going to the grocery store in person.

What to do? Of course, I could just call it quits and realise that I had spent $21.25 on things that I didn’t need.  However, just then my Neil came home and, on learning what I had purchased, decided to tease me about being lured in by clickbait. I was determined to prove to him that, contrary to appearances, I had in fact made a wise choice.  I was a savvy frugalista who makes good choices and knows how to save money. Well, that’s what I aspire to be.

So I went onto the Woolworths site and trawled the brochure specials in search of bargains.  But not just any bargains – things we would actually use.  This was a little hard as we try, for the most part, to avoid processed foods.  Well, perhaps some half priced Tim Tam made it into the shopping basket, along with a half priced large 400g jar of Moccona coffee.  Tim Tam slam perhaps?  Hmmm, Messina influenced choc-mint flavours.  To hell with fitting into the wedding dress.

I also added in some dried fruit and marzipan, which I plan to use when making a fruit cake soon.  (I have aspirations of making my own wedding cake – how hard could a multi-tier cake be?) We bought a few other wedding party supplies, too, such as cans of Coca Cola (on special) to go with the scotch we bought duty free in June.  We are sure that our guests will appreciate the Coca Cola, although to be honest my Neil is happy enough drinking generic brand cola for his own needs – I don’t even drink Coca Cola and rarely touch soft drink.

“Don’t buy things just for the sake of buying them,” Neil warned as I clicked 30kg of white rice, 4l of rice bran oil and five packets of wholemeal pasta into the shopping cart.

“Oh, but these are really cheap and we will use them,” I responded hoping that my positivism was convincing him that I really, truly was saving us money and had everything under control.

“And there are sooooo many things on special – some even half price,” I added.  This was correct: for certain products there were some great deals, although for everyday items in many cases ALDI remained cheaper.  Did I mention half priced Tim Tams?  Definitely a want rather than a need (or was that the other way around?).

I’ll leave it to you to judge whether this was a bargain or not.  I’ll also be leaving it to Neil to help me find some space in our already overcrowded apartment to store 30kg of white medium grain rice and 4l of rice bran oil, plus all the rest.  In the meantime, I’ve got four more vouchers to use so another $880 to spend in order to get some discounts. Any ideas on what I should buy?