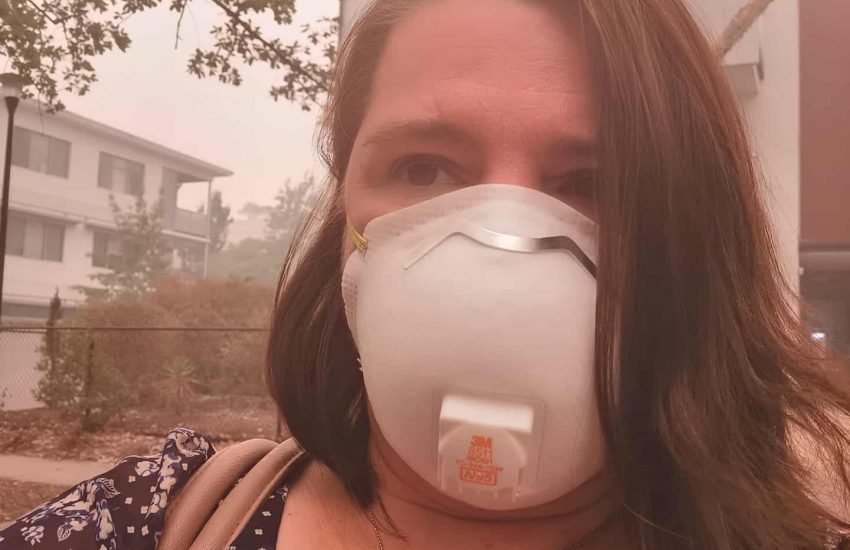 When I woke up in the morning, I could see a bright, yellow glow coming from behind the curtains. I thought it was a fire closeby at first, or maybe something messianic. It was kind of like a halo. “Mum, the sky is yellow!” yelled my kids.

It wasn’t a fire closeby. Instead, it was thick smoke, which trapped the participles of sunlight from the rising sun and created a glow. It would have been beautiful if it wasn’t so scary. A few hours’ later, Canberra Airport shut down due to poor air visibility.

I had a horrid migraine for most of the day. I think it was triggered by the thick smell of smoke, that seeped indoors even though we are well insulated. The boys were oddly okay about being cooped up inside, which was lucky for me as I needed to rest. I think they are used to it now, and they could see that going outside was not much fun.

In the afternoon, I went out on a social outing. A few weeks ago, I had said yes to seeing the movie Little Women with a group of friends from Zonta. With my headache and the poor air quality, I was rethinking this decision, but my friend had bought the ticket for me and I had made a commitment. So my boys went to their dad’s place, I donned a facemask, and off I went.

It was so weird outside. It was oddly quiet. Usually, in early January Northbourne Ave is loud with the engines of Summernats cars revving. But there was hardly anyone about, and those that I saw had facemasks on. I took an Uber as I didn’t want to drive with my migraine (normally I would walk or cycle). My Uber driver had been helping deliver supplies of facemasks and bottled water around Canberra to transportation points and confirmed there weren’t many of either of these things left.

At the cinemas, smoke was flooding into the foyer. But thankfully, once in the theatre itself, it was blissfully smoke-free. Relatively. I enjoyed two hours of light-hearted enjoyment, away from the reality of outside. Although I’m not really in the thick of it, I am more stressed than I want to acknowledge.

One of the ladies in the group had evacuated up from Narooma. I used to holiday there growing up, so know the area well. While she didn’t lose anything, she spoke of the chaos that surrounded the evacuation – of not knowing what was happening and fearing the worst. Like many, she doesn’t yet have an easy answer about how to help people and animals impacted by the bushfires.

What you can do to support your local brigade

Back home and I had a long Facebook chat with my Neil (currently in Spain with work and unable to return to assist) about the fires and how to help. People have been digging deep and giving to causes – but is this really going to help? Well, yes, the donations will help but it won’t be immediate. And it’s not as simple as just providing credit card details.

Neil had a few observations based on his 11 years in the Rural Fire Service.

The best thing to do is to be aware of the fire danger and how to respond in an emergency. All NSW RFS brigades hold an annual Get Ready Day, usually in September. (Neil notes that usually very few people attend these.) These days members have lots of information about property preparedness and having a plan (planning to have a plan is NOT a plan), which the whole family understands. Brigade members are also available to visit properties and give advise. This support will vary from brigade to brigade. In addition, many people are not connected with community groups in general (or even known their neighbours) and can be hard to contact in an emergency. Smaller communities often set up a phone tree to contact people in an emergency. To be prepared, spend some time with your family going through a Bush fire survival plan.

Secondly, he stressed the importance of supporting your local brigade, especially if it is in a small community. The RFS consists of a number of brigades, which all receive funding from the central RFS. But that funding only covers the basics – buildings, trucks, uniforms. Individual brigades need to spend money on additional things such as fridges for the sheds, torches, tools, radios, first aid equipment, strobe lights, batteries and snack packs. Unlike peak organisations, many of these small organisations are not able to facilitate tax deductions to donors and they are volunteers rather than professional fundraisers. (And thus you can donate to some, but not all, local brigades online through this link. If you are wondering, my Neil is in the Hoskingstown-Rossi brigade.) People can support them through a direct donation. Or they can buy from them at a Bunnings sausage sizzle or at a country show.

Finally, Neil recommends volunteering — especially with your local brigade. Many people are interested in what the RFS or other organisations do when there is a bushfire. But maintaining RFS brigades is important year-round, and it takes time and training to have the skills and equipment to respond. You don’t have to be on the fire ground to make a contribution. You can help with fundraising, helping at sausage sizzles, or assist with communication work. And if you don’t want to be involved with the RFS (or CFA or other organisations), then consider being involved with another service club such as Rotary, Lions, the CWA or Zonta. These organisations will be important in providing support in rebuilding communities in the longer term.

A good friend, whose husband is currently volunteering with the RFS, also noted that there seemed to be some confusion about donating to the RFS. Most donations of things to the RFS are going to fire victims and evacuation centres, not to brigades as such. Further clothes, toys etc are not needed now. She suggests donating these instead to Salvos, Vinnies etc, which have systems in place to send to those in need (including fire victims).

I wasn’t able to give anything away today. Nothing at all. I listed a few more things on the Buy Nothing Project website. One person put their hand up for a dominos set I no longer wanted. But he is away overseas and not able to collect until after 10 January. I took a small bag of things to the movies, but my friend didn’t want anything I had. Like many people, she is decluttering and downsizing.

Meanwhile, people continue to ask me how they can donate things like clothes. Donations of second-hand items during an immediate crisis requires resources to sort and transport and can divert volunteers from other more immediate tasks. It is far better to donate to charity-run op shops, as they can provide suitable goods to survivors. They also use the profits from the sale of items to fund their community programs. Or give directly to friends/family you know who have been affected – for one thing, it is likely they will have a similar fashion sense. I am going to be organising a clothes swap party soon as a fundraiser; money seems to be what is most useful right now.

For food donations, many organisations are accepting donations of non-perishable items. But often it is preferable to give a financial donation to organisations such as Foodbank or to give grocery vouchers to Givit or other organisations. Where possible (noting there is a shortage of items down the coast at the moment), it is good to support local businesses in affected communities so giving money will enable people to buy locally.

How are you giving to support the current bushfire crises? And what more can people do to help?