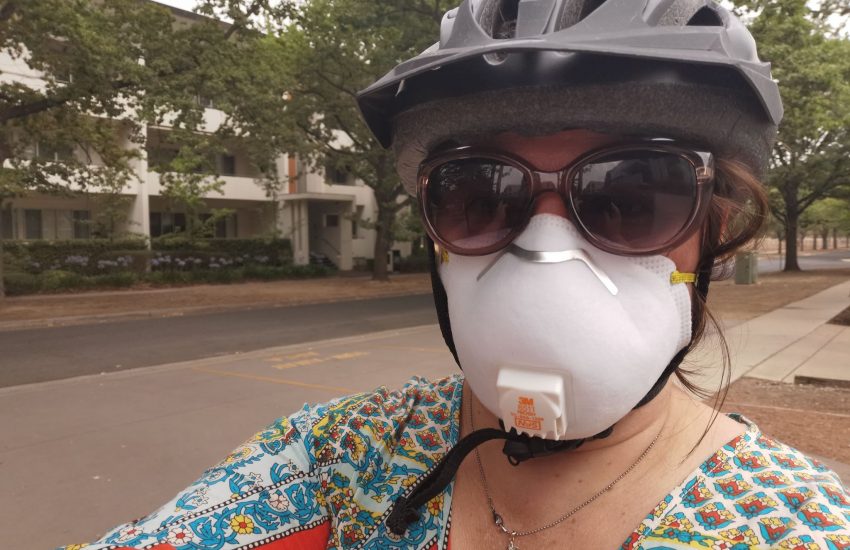 Canberra has settled into the new normal of smoke haze. I put on my smoke mask in the morning (correctly fitted this time – thanks to everyone who pointed out the problems – and headed out on my bike to meet with a friend, attend an appointment and then shop for book pack items.

Before I headed out, I received another cancellation of a guest at my AirBnB. This is the third cancellation so far this month. I run two AirBnBs – an apartment in Scullin, and a second (occasionally) from my inner-city home. I’ve listed the spare room in my home as part of the AirBnB open homes program (i.e. I’ve offered it for bushfire evacuees to stay there for free), but so far I haven’t had any takers. The second one is usually booked out solidly in January, but due to recent cancellations, so far it is only booked for two days this month.

I don’t want this to be a ‘what about me’ post. Overall, both AirBnBs have done really well. The timing of this, not long after I have given up full-time work to focus on writing, isn’t fantastic but we can weather it. It will probably mean that nearly a whole month of income is wiped out. People are leaving Canberra due to the smoke, and I don’t blame them as I wouldn’t be coming here for holidays if I didn’t have to. (Note: Canberra usually has beautiful blue skies this time of year.) And sports events have been relocated, also due to the smoke, which is understandable.

This got me thinking about the overall effect this crisis is having on the economy. People who are directly affected, who have lost homes, businesses, livestock, are suffering. But often it’s the surrounding businesses, not just in that area but in surrounding areas, that suffer as well. South Coast tourism has definitely taken a hit, as has tourism in the Snowy Mountains (usually popular for hiking and mountain biking in summer). Little towns en route to these places are probably also affected, as are larger satellite cities such as Canberra. I remember as a kid that we would drive up from Melbourne and camp at Narooma, and on the way back we would visit Canberra, Thredbo and other places.

I predict this is going to have a much larger impact on the overall economy than forecast. It’s not just what is lost directly – it’s also that many people have been indirectly affected, which means they are bringing in less money. And then people are giving generously, which means they will also have less money to spend. And who feels like going out drinking cocktails, lounging by the pool and engaging in retail spending when the country is burning? [I’m predicting a political response here, not my original intention.] It’s hard to stimulate an economy when people aren’t flush with cash.

Some campaigns such as the new Instagram account Spend With Them is encouraging people to support local businesses in affected areas. I would also urge people to consider nearby affected areas as well.

I headed out mid-morning to meet financial literacy blogger, Kate Crowhurst from Money Bites. She writes interesting, informed and thought-provoking pieces on financial literacy. And she also lives in Canberra! We had a great chat about a number of areas of mutual interest.

I gave her three books I had on money and finances – and a newspaper article from December that she was quoted in (she hadn’t known seen it previously). The book by Suze Orman is only on loan. It was a present from my Dad, who bought it at an event Suze was speaking at. She has signed it with the words ‘your Dad loves you very much’. Awwww, thanks Dad!

And if you’re looking for some inspiring reading to encourage you to spend less and live more sustainability in 2020 and beyond, Rachel Smith’s book Underspent is awesome. We had a fabulous podcast interview with her – check it out!

I have an exciting giveaway as part of the #AuthorsforFireys campaign! I would love your support in bidding – and sharing.

Are you affected, directly or indirectly, by the current bushfire crisis? How can people help you, and you help them, to recover?