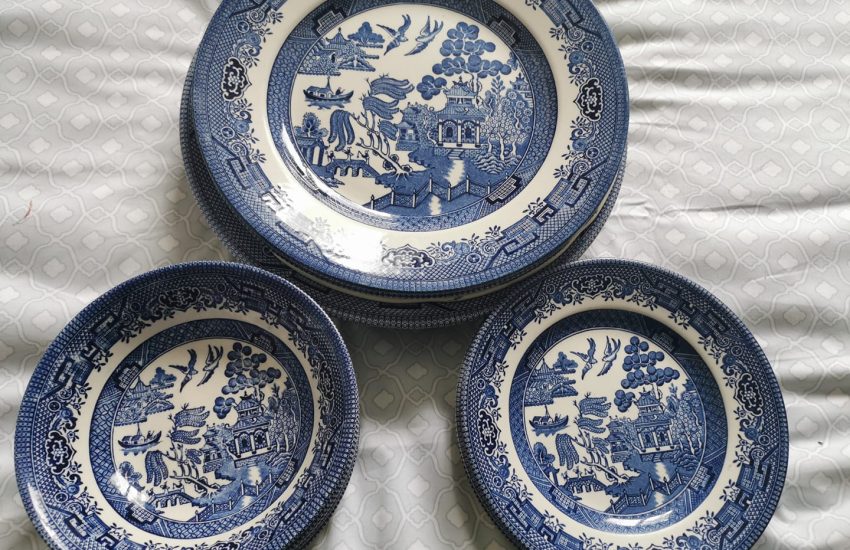 Once upon a time, I was fascinated with Willow Pattern china. It was the first crockery I chose when setting up house with my ex-husband. I loved the blue and white design. I once even fancied that my life purpose was to be a bridge between cultures, just like the bridge on the Willow Pattern design. But more than anything, I loved the East meets West romance that it hinted at, which I felt (hoped), reflected my own Taiwanese/Australian marriage.

But, alas, the wedding broke. I kept the plates and kept eating off them for over five years. He bought a new set of Willow Pattern bowls and plates (strange but true), and his new Taiwanese wife serves her Asian food on them.

One day I suddenly realised I was no longer the same woman I was before. I had wondered for a long time what parts of my Taiwanese/Australian identity would I keep. Eventually, I had given up my Asian surname. I haven’t been back to Taiwan in over three years. I only occasionally speak Mandarin. And I no longer work on Chinese issues. Suddenly, I realised it was time for those plates to go.

I bought two sets of simple black and white check from Big W during the Boxing Day sales: inexpensive and tasteful. But what to do with my old plates?

Truth be told, I wasn’t sure if anyone would want them. Were they too old fashioned? I put them up on my Buy Nothing Project site, and I was soooo surprised to find I had eight people who really wanted them. I decided to randomly choose a young Taiwanese lady.

She came around yesterday with her partner. They were so lovely, and she really liked the plates. I explained a bit about the story, and how it wasn’t really a true Chinese fable – more likely the romanticised story of a poor poet on the river and the beautiful, wealthy woman locked away by her father in the tower was created in England to sell plates. But I could see she still liked them, and I was so pleased to have closed that final chapter on my past.

In the morning, we went to church. With the smoke haze, we hadn’t been there since early December. The bushfires were a strong theme. Our Minister was away at Cobargo and other towns, where she has been working with people traumatised by what they went through. There are so many stories about what people experienced, and I feel that it is going to require a long term commitment to rebuilding and rehealing.

Somehow, I like to think that the fires are over even though I know logically they aren’t. The smoke haze rolled in while we were in church. It caught us all by surprise.

I asked my boys to pose outside our church so that I could show what the smoke haze was like (note: I don’t think it was hazardous). They were in a cheeky mood, so they decided to put on a show. The church is day-old bread that my church gives away. I will make this into breadcrumbs. Note: Usually there is grass outside the church. Green! I almost forget what that colour looks like in nature.

In the evening, I met up with a group of lovely creative ladies sans kids. It was a bit random as I was invited by someone who I had never met before, who was holding an event at her place. We have friends and connections in common, so it wasn’t totally strange. I find I like to be open to the opportunities that unfold before me, and let’s just say it was a fabulous, amazing night. I feel blessed that I am meeting the right people at the right time on this crazy new voyage of possibilities.

I took with me a German plum tart, which I was trialling for an Australia’s Best Recipe contribution (recipe to follow in a few weeks’ time).