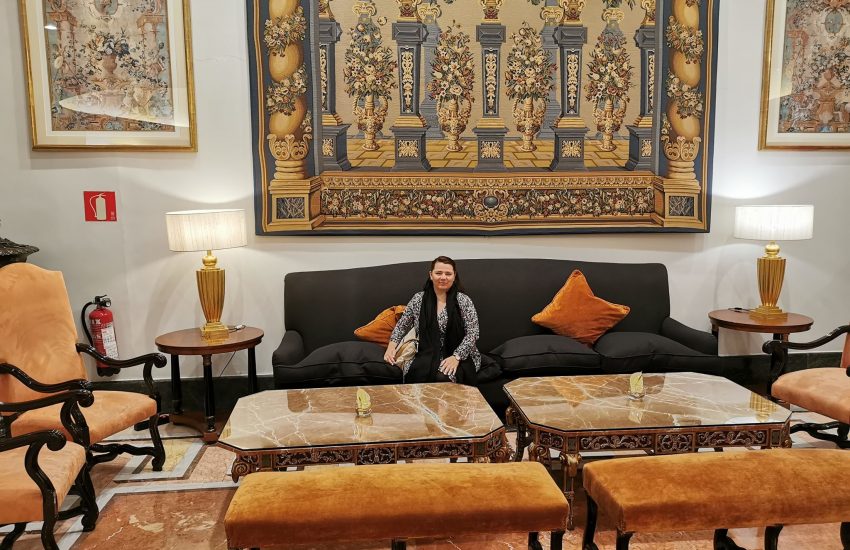 In the last few days I’ve been contemplating luxury.  And enjoying it.

I’ve missed a few days due to travel and reuniting with my husband, Neil. I’ll start at the beginning with this post:)

I’ve been in Abu Dhabi for the day, on transit to Spain.  I arrived at around 6am local time after an overnight flight. I was a bit confused about the taxi situation, so somehow ended up going with a limo service. Well, I wasn’t that confused. As a single, female traveller I chose to go with a driver who looked decent. And having a clean, new BMW was an added bonus.

It felt luxurious, so I just decided when I arrived to project that I was a super wealthy billionaire in the making.  Which I guess I kind of am, if I decide to think about it that way.  And once I’d made that decision that it would be how I would act, everything became about luxury.

After resting for a bit, I went out for a walk in search of something to eat for lunch. The concierge had told me it was easy to find restaurants, but everything seemed to be shut – or worse, there was no-one in the restaurants. It looked like a ghost town.  I couldn’t work out what was going on until much later in the day. Doh! It was Friday.  Their resting day. Most people, I later found out, like to sleep in on Fridays.

I walked all along the street and eventually saw two women sitting outside what looked like a café/restaurant.  That looked like a good option to me, so I crossed the road and headed there.  Wow, what a find!  Shakespeare & Co was a beautiful and elegant shabby chic restaurant/patisserie.  It was like a work of art, and so relaxing to just sit there.  The wait staff were lovely and I felt like I had butler service. The spinach lasagne was pretty good, too.  I gather there are more than one of these restaurants in the middle east. I certainly wasn’t expecting to find something so Europoean and pretty!

Afterwards, I found a beauty salon and decided to get a manicure, pedicure, massage and eyebrow shaping (threading) done. I saw a beauty salon as I walked by, but I couldn’t work out how to get in. Everything was all boarded up, and there were no windows. I went into the building in search of the entrance, then, when I was about to give up, I noticed some staff standing out the front. Yes, it was open. The reason it was so hard to find, I later realised, was because of the need for modesty and decorum.

It was interesting to be part of this inner sanctum. Most of the staff were Filipino so spoke English. I didn’t speak with the other ladies getting treatments, but it was fascinating to watch them walk in with their black robes and headscarves and disrobe to show they were wearing some fairly sexy things underneath!

Next I headed off to the Louvre. Yep, the Louvre.  They’ve got one in Abu Dhabi, too. The building is amazing.  Actually, most of the architecture in Abu Dhabi is innovative and stylish, but this was especially so.

I saw some impressive historical pieces, including some Han dynasty pieces and an Egyptian coffin.  But what I was really here for was to see the exhibition: 10,000 years of luxury.

Luxury. Yep, it was a fascinating exhibition.

Obviously, as the name implies, there were beautiful, decorative objects.  One of my faourites was an elaborate pearl necklance, made in the UAE and gifted to a famous singer.  And an emerald, amethyst and gold piece of jewellery designed to be fitted onto the bodice of a dress. Imagine, priceless jewels designed for a dress.

But through the exhibition there were hints that they were delving into the tension between highly embellished/over the top versus simplicity and fine craftmanship.

I want to share here some of the quotes from the exhibition:

Never in the history of humanity has the term “luxury” been used so often as in these first decades of the 21st century. Going back to the roots of the world’s once obscure etymology, we find that it is associated – correctly or incorrectly – with concepts of brilliance or excess.

From a sign at the beginning of the 10,000 years of luxury exhibition.

And then later in the exhibition, when more modern 19th century pieces were exhibited, we see a move towards simplicity over brilliance.

The mid-19th century saw the emergence in Europe of the decorative utopias whose chief exponent was William Morris. He proclaimed that other ways of producing objects could bring forth a new humanity, and that the simplicity of things both beautiful and useful conferred on them a nobility equal to any luxury.

Pursuing the same idea of purity and simplicity, the French interior designer Jean-Michel Frank was thought in the 1920s to be overturning the very principles of decoration, the idea of luxury as opulent and highly ornamented that the 19th century had bequeathed to his contemporaries. Luxury has since oscillated between controlled complexity and sophisticated simplicity, a fragile equilibrium reflected in the tensions of the 1920s and 1930s between Art Deco and Modernism.

The Ambivalences of Luxury

“Sophisticated simplicity”. What an interesting term. For a frugalista on a decluttering challenge, could this mean that the focus of what you decide to keep rather than give away could be about what is both beautiful AND useful? And more on Jean-Michel Frank:

In the 1920s and 30s, the French interior designer Jean-Michael Frank introduced a new idea of luxury. The bold simplicity of his schemes reflected an aesthetic of emptiness, resulting in ‘a strange luxury of nothing’. Characterised by rigorous line and geometric forms of graphic clarity, his furniture also displayed a true appreciation of materials such as parchment, shagreen – fish leather – and straw.

Wow, luxury coming from less rather than more and from simple, sustainable materials. That sounds so climate-change driven 2020.

And one final quote, which resonated for me as I aspire to lead a Zen-style mindful life (note: I am way to cluttered to claim I have achieved this):

On the other hand, luxury can also reside in simple beauty of material or form. In Japan, the aesthetic of wabi-sabi values of the simplicity (wabi) of objects and the patina (sabi) resulting from time and use. Kintsugi – a repair technique with gold lacquer – makes a virtue of accidents. The luxury object is the one that is repairs in order to be handed on.

I quite like some seriously elaborate OTT things, such as late Rococo style architecture and fashion. But there is something to be said for the clean lines of a well designed and tailored suit, or the zen of not too much clutter for the sake of it. Simply put less is more, and luxury is often about style and space rather than simply more crass bling.

I’m sensing a strong swing away from the need to be seen wearing brand names and lots of bling, to an ethos that is more about sustainability, local craftmanship and design, and style.  I can see a move back towards homemade, well tailored dresses for instance rather than lots of ‘stuff’ bought online.  And homes that are less about displaying trophies and trinkets and more about space, light and movement.

But back to my decluttering challenge. At the airport, I left my recently achieved op shop book behind along with some other books. The book also had a bit of a luxury theme, notably references to shopping, Los Vegas and conspicuous wealth. It was a light and easy read.

I registered the book with BookCrossing, and left a note on the back asking people to log in and track where it has gone. I’m interested to see how it goes!

Over the last few days, I’ve been reuniting with my Neil. He splurged on two nights at the Intercontinental, Madrid. Because of his IHG membership, we got upgraded to a balcony room. It was a bit too cold and rainy to sit out there, but I liked the luxury! And it was a lovely, opulent place to visit – especially as my focus was on resting to get over my lack of sleep! We did wander out, though to walk around the Salamanca fashion district, stopping at a small local place for some tapas. I do like looking at high end fashion, even if I’m not buying it!

Confession here: as a frugalista, I sometimes feel torn and uncertain about luxury. On the one hand, I LOVE reading the luxury liftout in the Australian Financial Review and I enjoy window shopping at luxury clothing and jewellery stores. But on the other hand, I’m usually happiest op shopping and I find it hard to accept expensive things. (Even the hotel, a present from my lovely husband who missed me, was a bit hard to accept. I managed it, though.)

What does luxury mean to you? Does luxury need to cost a lot of money? Can there be luxury in less? Or is it all about over the top?